There's something special about winning in clothing that is attached to good people.  I have been lucky enough over the years to have that special feeling quite a few times.  And again i had that feeling yesterday, when  I won my first race for Baboco Cycling Team.  It was a small race but, as they say, a win is a win!

The course was a combination of long gradual uphill pavement, millions of muddy s-turns, a mini mud bump and sand pit, finishing on a fast grass descent. With the high winds, it seemed best to ride in a group but i knew that if i rode in a group i'd have no chance of winning and possibly not even podium thank to my (not so) glorious sprinting skills.  So when the gun announced our departure, I immediately worked hard to get to the front. After an ok start, i found myself in fourth place heading into the first set of S-turns.  I tried to already start making my way to the front but i found out the hard way  - - after having to slam on my brakes - those S's stand for "single file only."

Luckily the extended gravel descent was next up. There i passed the gals until I was in the lead, then slowly worked on building a gap.  At one point, they were looking like they were on top of me but i kept the pressure, extended the gap and it paid off with a win.

It may not have been a big race but it felt satisfying nonetheless. I got an excellent workout in, made a bit of pocket change, got a trophy and flowers (that I immediately handed over to Jonas' mom) and had the chance to finish ahead of gals who were kicking my ass this year.

On top of that, it was a very special feeling to work well with Jonas in our pre-race routine.  He is now at the point where he's wisely choosing my tires and tire pressure, and even my undergarments so i am best suited for the elements.
Yesterday was also the first win i had on Concap nutrition supplements. I just started taking a couple of weeks ago.  Thanks Concap!
(podium shot by Jonas; other photos by Kris Claeyé)
Posted by PEANUT at 6:55 PM 6 comments:

Racing for BABOCO Cycling Team and LOVING IT!! 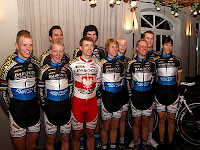 Yesterday, in one day i switched from the newly formed Champion System - LBS to Baboco Cycling Team. It was easily one of the best decisions I'd made in my life.  The atmosphere of the new team is friendly, kind, easy, respectful of me and of women in racing. I cannot be any happier!  I will surely miss my almost former teammates but look forward to flying the colors of the new Baboco kit!   More info soon.

My next race is tomorrow at the opening round of the GVA Trofee in Namen.  It is considered the first "real" race of the season.  I am so emotionally drained at the moment that i am not sure of my result for tomorrow. But i am hoping that my newfound enthusiasm turns out to be a driving force of sorts.
Thanks to you all for your support!! It means a lot to me.