Today I gutted myself...

to finish the motorpacing workout that Amy Dombroski never got to complete two days ago. 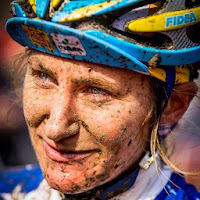 Even though I can only dream of having the talent that Amy had, I rode faster today behind that scooter than I had ever ridden.   By the end, I was completely empty – both physically and emotionally.


My upcoming cross season is dedicated to Amy.  As I tackle almost all the races she had on her schedule, I will keep her  in my thoughts.  Every pedalstroke I will be sure to relish - in her spirit of “play”.  This is the very least I can do for a truly exceptional person -  like no other.


When she was first planning to take on the Belgian cross scene a few years ago, I happily helped her out with some of the logistics as I had been there…done that.  We had a special bond as two of the three Americans (the 3rd is Jonathan Page who helped me in fact) who sacrificed lots to follow that dream of being Belgian-based for the cross season.  As I know how difficult it can be to make that happen, I had much respect for her courage and conviction. She fought hard and remained strong, even when it got tough and lonely here on the other side of the world.   In such a short period of time, it was amazing to see what worldwide impact she’s had – all the folks she’s touched - while following her dreams.   xxx
Posted by PEANUT at 5:46 PM 8 comments:

and i am not feeling ready. Hate when that happens! The STEVENS bikes are finally put together and are absolutely DREAM MACHINES!! I never imagined riding a cross bike could feel like this.  It also helps that they are spruced up with 3T parts and Challenge tires! I'm a lucky girl.

Over the summer, while i mainly "relaxed" i did get a chance to spend much time in the hills.  After two weeks in Cyprus,  I went directly to the Ardennes (hilly part of Belgium) to spend time with Jonas and his family on their yearly holiday. I rode the bike a few times, including a couple of laps of the Belgian Championships course where my former teammate Liesbet De Vocht took the title a few months later. Yippee!!

Next up were a couple of road races to keep in touch with the speeds of the peloton. It was also fun to see some friendly faces again (amidst the grumpy bitchy ones you find in the Belgian peloton i must add.)

In June, I took off for France for a dream job as a Tour Guide. My job was to ride 10 stages of the Tour de France for a private tour.  There were 3 clients and 9 of us in support. Every day, we got to ride the most beautiful terrain through France then come home to mind-blowing accomodation - one day a castle, the next a villa, and so on.  The experience was surreal. It also helped that the clients were a dream to work with. It may be hard work but it felt like a pleasure to do it - a job i really loved doing.

After that trip i needed a bit of recovery (I snuck in a couple more road races but just sat in with the peloton - that counts as recovery, right??). Part of that recovery included a visit to see Ronny, one of my all-time best friends. He lives in New Jersey, just over the George Washington bridge to NYC. Almost every day of that week we rode into Manhattan to "cruise" as Ronny puts it!  I also had a chance to again see Frankie, another top friend, as well as two very special folks who are like my second parents - Ruth and Bill. They are two of the most amazing people i know. Married about 60 years and in their 90's!  They just returned from a trip to Iceland. They also still work and go to their country house on the weekend. They have more energy than me most times.

The day i returned from NYC, Jonas picked me up at the airport on the way to Vermarc - my new clothing sponsor. A bit after we returned home, my friend Claire arrived to spend the night as we were taking off early the next morning for training camp...in France.  We were able to stay for a couple of weeks at her team's apartment located in Valmeineir, high up in the Alps - 1850m to be exact.

The first few days were amusing with the altitude, combined with the super long-ass climbs! Coming from Belgium, i was in shock.

And every day, after our rides, we still had to climb back up to 1850m.  Once showered, we made tasty ginormous veggie meals with all sorts of goodies i brought from our garden back in Belgium.  In the evenings, we walked 150m down to "town" where we sat in on silly entertainment with all sorts of performers geared to keep kids engaged. I fell asleep during one of them. oops.

A few days before we were to depart, Jonas showed up for the festivities. He may have suffered like a mo'fo the first few days of riding - going from not riding AT ALL to directly riding the Galibier, Telegraph, Croix de Fer, etc with us, but after a few days he was starting to really move. His best climbs were most likely Col du Glandon and Alpes d'Huez.  Proud of him.

Then it was time for Claire to head back to Belgium to contest the big UCI road events, Jonas and I took off south to meet up with Nancy for a week in Mazan, just next to Mt Ventoux.  She left us only a day after our arrival as she decided at the last second to go to Austria for a one-day cycling event, but even so it was great to see her! She can be proud that we used her little apartment to its fullest.

Every day we went on an adventure. One day up Mt Ventoux, another to Avignon, then to fontaine de vaucluse, and so on until it was time to drive back to Belgium at the end of August.

Last weekend was my first race of the season and while I had a great time over the summer, my racing definitely paid the price. The race was Soudal Classics Neerpelt - an intervalfest, something I 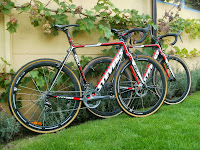 hadnt focused on yet. In fact my first real interval was in the pre-ride on the trainer. I thought i was going to die.  I was warming up alongside Ellen van Loy and and after her interval she looked about as worked as i did so i figured i didnt miss much in terms of the pain feeling any better. But i did miss a bit of fitness I'm sure. She went on to finish 4th while i was back in 14th (not that i would ever be able to finish 4th in a race like that on such a high level but maybe top 10?) No worries, though. I have a full schedule until the last week of February to give it a go...again and again.
This year around, I started my own team. My sponsors are STEVENS Bikes, Go-T-Strong (a super cool "green" transportation company out of Texas), HempAge (casual clothing), Challenge Tires, 3T Cycling (wheels, cockpit), BOOOM (energy bars/gels/drink), Vermarc, CrossVegas, SHEEX (performance bedsheets and pajamas), Tam Bikes out of Mill Valley, and Specialized (helmets, shoes, gloves).  I also added a bike pure arm band on the jersey as well as the official Vegan logo on my collar and ass.  It feels GREAT to be able to once again hand pick my sponsors who parallel my beliefs.  Unfortunately my new clothing isn't ready yet, so until then i will be sporting the STEVENS factory skinsuit.

My next races are October 12-13 in Grote Prijs van Brabant (s-Hertogenbosch, NED) and BPost Bank Trofee Ronse (BE.) Not sure how they will go but i can tell you one thing...I will be excited to be there racing my heart out!