Koppenbergcross as seen from my saddle

Sorry for the delay in posting about the infamous Koppenbergcross. I just now plucked the last 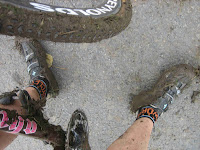 pieces of mud off of my shoes, skinsuit and deraileur pulley wheels! Since it had rained a bit on monday and tuesday here in the Brussels area, I expected there would be a bit of mud on the course since its terrain is especially known for its unique ability to retain every drop of rain water that falls on it. 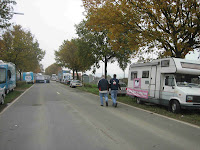 the night before the race as well, making most of the uphill of the womens course unrideable. (Part of our uphill is different from the mens' course.) We had almost five minutes of deep mud running per lap.

Again, Jonas and I parked the Vanderkitten Mobilehome on the main entranceway leading to 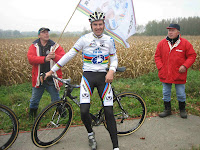 the Koppenbergcross race site. We were alongside all the big pro mens trucks and RV's such as Fidea. OK, we lied to get there but we did it in the name of Vanderkitten - hahaha! The women were supposed to park somewhere far far away but since we wanted to be located where there was the highest quantity of foot traffic, we pretended i was a guy racer. My ultra short hair and little boy looks helped us to pull it off. 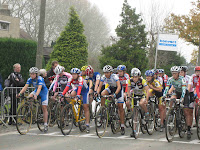 The course started off on a paved straightaway. At the end, we turned left into a thick mud stretch that lasted maybe about thirty seconds.

Next was a curvy paved section that got steeper and steeper until the left turn at the top where the uphill running through tacky slop began. This section was such a task that it even brought a few of the women racers to tears! 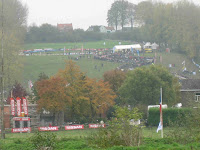 Once at the top, I grabbed a fresh bike at the pit (thanks to Jonas) for the treacherous descent that was more like a twisty ice chute. Fans crowded the downhill in hopes of witnessing firsthand the expected carnage. It was on this section that i heard the most cheers - a range of Allez Peanutje, kom aan Christineke, go christine, come on peanut. I didn't even realize that so many people knew me! Some of the voices i recognized such as Gary and Betty from California, Jonas' mom, Serge, Maaike's family and a few others. But if i weren't on the rivet trying to stay upright on the descent, it would have been fun to see who these people were who were 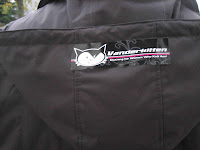 cheering me on. Maybe most were people who collected my trading card earlier in the day.

Following the descent, there was a short pavement reprieve of about ten seconds before returning to more thick mud that was borderline unrideable. After collecting about 3kg (5lbs) of mud on the tires, frame, shoes, brakes, we entered the start/finish straightaway to do it all again, but with additional mud-weight in tow all the way up the Koppenberg.

I'd have to say of all the laps, my favorite was the last. I caught Laurence Leboucier on the start/finish straight and passed her midway through the first mud section. My adrenaline was running so high from seeing the former 2X world champion between my legs as i looked behind that i was able to stay away from her on the climb! And my trip down the chute was nearly textbook! By the finish, I had gained almost 30 seconds on her. It's funny what you can accomplish when you're running scared!

After crossing the line in 11th, I collected my jacket and drink 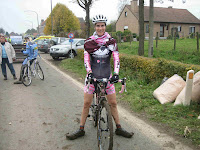 from Jonas' mom, then headed to the Vanderkitten RV. Once showered and fed, I returned to watch the end of the mens race where Sven Nys took a solid win. Bart Wellens was hero of the day, though, by putting in a superhuman effort to get Nys' wheel late in the race. Too bad they don't have awards for most courageous. 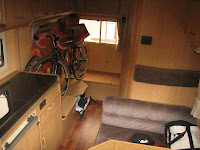 cheers as well) mobile for some lentil soup (homemade by me), salad, pasta, belgian beer and wine. All the passerbys who were returning to their cars and bikes must have been very jealous as they watched our party spill out onto the main entrance straightaway. I can't say it enough how cool it is to have a mobilehome at a bike race!

The next race is Pijnacker World Cup in The Netherlands Sunday. Based on the course last year combined with the very wet weather forecast I expect it will be somewhat of a repeat of Koppenbergcross - minus the koppenberg climb!

Thanks for reading.
Posted by PEANUT at 4:34 PM

...close the curtains on the travel unit, when yer off watching the mens race, so somebody doesn't steal yer babies...signed:paranoid but sensible...

Now, we know that, like Jackie O, you have far-apart eyes, and at least one pair of enormous sunglasses. Do you also share with her a large shoe size [cf. penultimate photo], or were you wearing scuba flippers for the Koppenbergcross?
-- E.C. Chamberlain

we pretended i was a guy racer. My ultra short hair and little boy looks helped us to pull it off.

And even with the big pink sign of "clothing for women who kick ass," you pulled it off...

maybe i will market the mud slippers as the Jackie-O model, although i doubt her shoes ever got that muddy from the central park reservoir loop.

Great to read this report straight from the trenches.. thanks for writing it, Christine.
Looks like it was even tougher than I had imagined.