Where have i been in California, you ask... 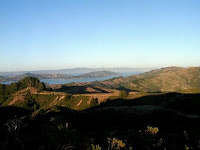 For those who know the San Francisco area, namely Marin County, AND are curious to know where I've been while visiting a couple of weeks ago, here you go!
General concept of the rides
day 1: 2hr15min - paradise ride around tiburon total time
day 2: 3hr30min - reverse alpine loop - sausalito-mill valley-east peak (top of mt tam), rock springs parking lot, ridgecrest, bo-fax to fairfax and back to sausalito
day 3: 4hr45min - sausalito-mill valley downtown-basic instinct descent down shoreline to highway 1, up and over to stinson beach, along bolinas lagoon, up and over to olema - pt reyes to Bovine Bakery - got vegan oat cookie - olema - samuel p taylor park - local roads to fairfax, through towns to Sausalito
day 4: 1hr45min - through downtown sausalito towards Golden Gate Bridge, up scenic Conzelman to top, drop down backside, almost ride off cliff checking out views, circle around military barracks, various tiny scenic roads, past Cronkite Beach on dirt trails to watch surfers, up and out through wind tunnel, descend to Sausalito
day 5: 3hr15min - offroad CX bike - sausalito - tennessee valley parking lot - coastal fireroad trail - up walls, down to muir beach, up hwy 1 to Coast View Trail, pee'd behind rock, up trail to Pantoll, back down same way to muir beach, up Middle Green Gulch Trail to include gut-busting steepy section part way up, continue to top of Coyote, and down Miwok to parking lot, back to sausalito
day 6: 2hr30min - offroad CX bike - Sausalito- downtown mill Valley - up Tenderfoot, over to Railroad Grade to East Peak. Back down almost same way, minus Tenderfoot. One flat tire was enough (friggin Railroad!)
day 7: 3hr35min - offroad CX bike - Sausalito - tennessee Valley parking lot - rock springs climb, down miwok, explore a bit, then up bobcat, down marincello, back to parking lot, thaw out from last descent by climing up coastal walls, down to Muir Beach, along muir woods road to Deer Park fire road, up and up and up to top of Coast View trail, then back down Coast view to fruit stand (at least where it would have been had it been there), detour up Muir Beach Overlook to freeze our Beljum Budder cream off , down the hill to Green Gulch, up Middle Green Gulch trail fully clothed to top and back down to Tennessee Valley parking lot via Coastal Fire Road - Sausalito.
day 8: 5hr - sausalito-san rafael via San Quentin Prison, over to San Pedro Road to "Big Rock", up big rock singletrack to the top where you can see the valleys just in front of Sonoma and Napa, back down and home almost the same way with a detour through China Camp trails and for dinner at Sol Food in San Rafael.
day 9: off bike but on foot in Ess Eff through all the neighborhoods. Thrift shopping in Mission was the best.
day 10: 5hr30min - sausalito, through little towns (the back way though) to Fairfax, up and over white's hill, samuel P taylor park, up and over to olema, down the road to Limantour road, up and over Limantour to the beach, back the same way but twice as fast as the deadly winds died down a bit. I was only thrown across the road once thankfully. The rest of the way out though was spent riding sideways.
day 11: 4hr - sausalito - mill valley - pantoll - stinson where i had that god-awful Sobe Lizard drink that turned out to be a tall glass of friggin' milk that caused me to have the most extreme pain coupled with troubles breathing, eating, swallowing, digesting food. Two trips to on-call doctors and about seventeen medications later i am still suffering from it, bolinas downtown - detours around the little streets in bolinas - mesa road - up bo-fax - up ridgecrest - down to tam valley - sausalito
day 12: 4th - sausalito - over golden gate bridge - presidio park, chrissy field, marina for Pluto's salad, union st, got lost trying to get back to Scenic Drive in Presidio park and repeatedly took Jonas up about twelve super-steep blocks and one impossibly long staircase. (As we shouldered the cross bikes, this woman at the bottom of the stairs told her kid to move out of our way because we have our mojo on. I am still trying to figure out what that meant. And we wonder how we all grow up with the goofiest sense of reality.) finally past GG bridge, through presidio along the clif to Richmond, final destination Brewery on the water. but with sun going down, we timetrialed back to GG Bridge, up and over and down to Sausalito.
day 13: 5hr45min - marshall loop: Sausalito - through little towns to Nicasio, Petaluma's Cheese Factory, rolling roads to Marshall Wall, up wall, descend to the bay, along the water for the Cookie Timetrial to Bovine. Then over to Olema, up to Samuel P Taylor park, through small towns, over White's Hill to Fairfax, through tiny towns, up and over mill valley via Meadowsweet, sausalito.
day 14: off doing a bunch of stuff i cant remember, maybe because most of it included packing bikes and crap to send back to belgium. Ended with a pizza party hosted by don. Cool attendees included don juan, ledward, GQ, and the Lizzer.
day 15: off packing, eating, drinking, and goodbyes with Doug, Monet, and Karin.
day 16: off to Belgium
day 17: still flying until 10pm
day 18: swung by airport to retrieve lost luggage on way to Ardennes for the week.
Each ride ended with Jonas stopping off at the "skank store", a little convience store which looks 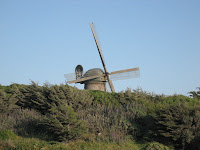 more like a night shop located at the Sausalito end of the bike path. I forgot to tell Jonas that the official name of the store was not "Skank Store" so when we went in one night to get some wine, he announced in a loud voice "Oh, this is the skank store". The cashier didnt seem to thrilled with Jonas' insight but it made me and Karin howl.
When we werent riding our bikes or buying/drinking wine, our time was spent lounging by the swimming pool (ok, only once for ten minutes while trying to finish an article for Marin Independent Journal - i would have stayed longer if i could have seen the computer screen), dipping in the hot tub (which lasted three minutes since the water was too hot at about 105°F), visiting Karen in San Francisco, going to Pizza parties at Don's (thanks for all who showed, especially Liz H for driving a zillion miles to be there), hanging at Mill Valley's Mt Tam Bikes, and eating - lots of it.
We had Puerto Rican Sol Food (San Rafael), Avatar's Punjabi Burritos, Joe's Taco Lounge 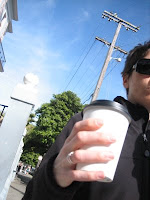 burritos, Lucinda's Zookie Burritos, Whole Foods salad bar (all in Mill Valley), Sartaj's Indian burritos, Arawan Thai (both in Sausalito), Herbivore's burrito and noodles, Club Waziema's Ethiopian, Pluto's salad, random Mission burrito, and the newest trendy San Francisco coffee Blue Bottle served out of a garage (all in San Francisco.) Every day also started off with a collection of bagels from Sausalito's Bridgeway Bagel. They have salt bagels, my favorite. I put some mustard on them and it reminds me of street pretzels in NYC.
Thanks for reading!!

Someday, I hope we get to ride together. Sounds like a wonderful time filled with riding and enjoying good friends. Lately, my rides that end up going anarobic have really bothered my lungs. I guess it is good to push too hard sometimes. I have done my best times recently and they keep improving. I only ride 42 to 50 miles at a time. So glad to see spring here at last. Not real impressed with all the little black insects. Ate one on this evening's ride. Hope I don't grow wings or catch something bad from injesting bugs. That lizzer is a nice young lady. I really appreciate her kindness. Perhaps I will get to see her race. Thanks again for all you do.
Rickie

hey rickie
Thanks for your kind words (to me and to liz!)
Maybe one day we will meet. I am speaking in NYC may 17 if you are in that part of the country at that time.
I wouldnt worry about swallowing bugs since stomach acid can usually kill just about anything!

Hey Christine,
I really wish I could be in Newyork to see you talk, that would be great. Liz is suppose to be in Tulsa Oklahoma on May 30th through June 1st. If I can get exact details of where the vanderkittens are suppose to be on what day and where, I will try to take off work and go meet her and watch them race. Found a new road today and it was incredible even with the 30mph head wind I had to endure for 16 miles to get there, and then it was tail wind and high speed all the way back. High 30s in the straights and maxed out at 42mph at one point. Fun. and no bugs entering my gasping throat.
rickie

Oh yeah, where are you speaking? I may drum up some folks to enjoy your talk. Just post it in the comments and I will get it.
rickie