Heart of Cross Season is HERE!

There is a period of about two weeks during christmas where the racing really picks up here in Belgium. This year is a little slower than normal for the women but still busy enough! I race December 19,21,26,30, January 1, and 4.

I've just done Scheldecross (Antwerp, Belgium) on December 19 and Nommay World Cup in France two days later, and they both left me in optimistic spirits. Although the results are not even close to those reflected by my "normal" fitness I had 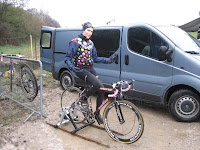 glimpses of hope during the races where i had decent sensations. I felt like i was racing my bike again, that is...after the first two laps of both races where I pedaled backwards before moving forward. By the next race, my goal is to move forward effectively throughout the whole race which means i will do the first two laps during my pre-ride. It is a plan, anyway.

I may not have many

photos from the race, but i was lucky enough to have one from the pre-ride that somehow made it into the local French newspaper. It was taken as I reached the top step of the staircase just after the start line. 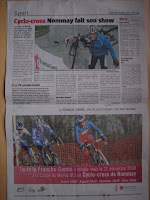 A full race report will be on Cyclocross Magazine shortly - including more photos taken by Krist Vanmelle and Nancy Van Peer.
Today Jonas and I went on the old mans ride out of our neighboring town of Kortenberg. Surprisingly, there were twenty guys who showed in the bitterly cold weather. The ride started off easy enough with average speeds of 31kph. But after most of the ride was over, the guys started to play and the speeds jumped considerably. It was so inspiring to see guys up to 80 years old run each other into the ground after three hours of riding. The only real

drawback to riding with those guys is that some of them are fully aware of how fragile they are and ride dangerously defensive. On today's ride, I almost ran up the ass of one such guy as he slammed on the brakes when a car appeared around a bend, driving in the opposite direction. Luckily Coach Elmo taught me early on never to place my front wheel directly behind another rider's wheel.

After the cold ride, Jonas' mom met us at the house for a much-appreciated glass of warm spiced wine. I drank it while wearing my warmest, fuzziest largest sweats and my favorite fuzzy hat with pom-pom ears.

Way to keep in real with the warm up. Love the jacket, the mud, sticks, rain and trainer!

Mmmmm Gluhwein! What away to relax after a hard sesh!

I've not been keeping up with teh racing of the last few days (work always seems to ramp up around holiday times) so don't really know you you got on, but you obviously feel positive, there is nothing like 6 races in 2 weeks to force the fitness! I love the photo of you racing accros the 'wasteland' with Antwerp in the back ground. I have fond memories of Antwerp :)

I look forward to your report on cxmagazine!

Dopn't you just hate it when people 'twice' your age hand it to you! :)

Hope you and Jonas have a very very Happy Christmas, best wishes for the New Year, and all those races you have coming up!

Adam: I too was impressed with Jonas' creativity with the sticks under the trainer. He also grabbed a fence from Sven Nys' pile to hand the other bike up out of the mud. By any means...
hey chr-the scent alone from that wine is enough to calm the nerves. I liked the background of that shot too which is why it made it on the blog.
happy holidays to all!!!

Hope you and Jonas have great holidays together! Hope to see you when we get back in 09!

1. Get a trainer sponsor (how old is that thing?)
2. Find more polka-dots to finish the sleeves
3. Hire French publicist

...christmas eve...hour & a half on the cross bike in the rain & cold was all i had...get home to find out more snow is expected on mt tamalpais tonight...arhhh !!!, no wonder i was getting chilled...

...agree on that antwerp shot...old timey euro w/ that background until you realize the gear is 'moderne'...& ya, props for the trainer set-up in the mud...

...hey, peanut...my best to you & jonas this holiday season...hope things go well for you both...

Thanks amy! you too! YES, looking forward to it.
hey GC: Trainer is one month old. It is a simple one since i use it in the rain - no electronics. yeah, the jacket would look even funkier if the dots ran down the arms. Usually jonas translates any french i dont understand but he was nowhere nearby so i had to rely on my limited french i learned from racing for that french team last year.
Thanks Little J! To you guys too!
Hey bgw
Thanks for the props. jonas just read it (he is sitting next to me on his laptop) and it put a smile across his face. That antwerp shot was cool! A gal named nancy van peer took it. She is the same one that supplied me with shots of Bart Wellens for the Cyclocross magazine article i wrote a bit ago.
Happy holidays to you and your family as well!

Some cool piccies (cool as in cold as well : )
I need your advise.. what is your idea on disc brakes on a cross bike?
I think this one is pretty cool (I don't have a cross bike yet)
http://www.genesisbikes.co.uk/series/croix_de_fer

happy holidays and happy racing.. it was rather cold today.. and more frost to come