Shorts on a long week

Since my race last weekend, I've kept busy with lots of recovery, experimental cooking and even a little socializing. Last time i semi-socialized was before the cyclo-cross season started so it felt really good - invigorating yet relaxing if that can make sense.

Of all my food experiments this week, the two that worked out best were moroccan veggies and oatmeal raisin cookies. The veggies were rather straightforward but it was the first time i ever cooked them so I was excited it was more than edible. But the cookies blew me away I must admit. They tasted like crunchy soft butterscotch caramel treats. Among the secret ingredients I used to make it a success were marzipan and speculaas (belgian/holland sugar cookie) spices. They were so unreal i had to remove them from the house almost immediately after they left the oven. After eating half the batter and half the cookies, they were relocated to Jonas' mom's house. They say the best gifts are those you dont want to give. That sentiment never felt so true.

A few days ago, Jonas and I walked down the street to meet up with Bruno (fellow cyclist and 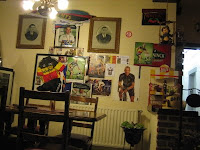 owner of the local bakery where they have excellent multi-grain bread) for a drink at t' Wilgenhof - our neighborhood cafe. We were there to give them a copy of the newest Cyclocross Magazine. I mentioned them in the Sven Nys interview so i figured they'd get a kick out of it. As an unofficial Sven Nys supporter cafe, they loved it! I wonder if the article will make it onto their Sven Nys wall shrine. By the way, Sven Nys was just named Belgium's Sportman of the Year last night. It was the first time a cyclocrosser won. 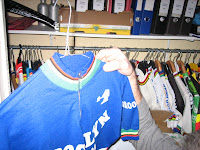 My second social evening required my walking in the opposite direction of the cafe to the bike shop in town owned by Jan. It's called Fietsen Goeman. I got there at closing time so we can have a glass of wine after he replaces a broken spoke on my wheel. (My spoke broke the day previous during a group ride with the old - but fast - guys who keep their speeds hovering at about 35-40kph. The average age is about 50 yrs old! After Jonas and I fixed the spoke it was a real bitch to timetrial back to the group 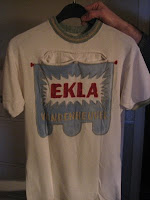 but we had no choice as we didnt know where we were.) 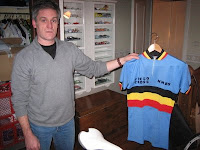 After Jan fixed the spoke, we enjoyed our glass of wine while rummaging through Jan's jersey collection. He has about 100 jerseys from famous people with either world champion stripes or so old it is made of wool. He even has rainbow striped jerseys made of wool.

Next we played with his new Tacx indoor trainer. It's that high tech one where you hook it up to 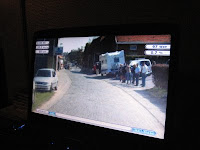 your computer so you can ride famous events like Tour de France and Tour of Flanders. It was too cool. They use real footage of the course, complete with cheering folks taking photos. I can easily see myself sitting on the trainer for hours without noticing the time. My ass may notice though.

There is also a mountain bike version where you get to steer...and crash. I tried running into a military guy leaning against his green 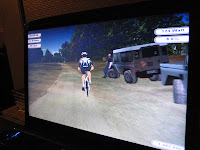 camo truck smoking a cigarette and it really does feel like i crashed. The program is designed to put immense friction on the pedals when you hit something so it feels real. As the fictitional mtb guy got to his feet, swaying his head, i couldnt help but laugh as he shook the shock of crashing off his body.

And a third - since everything always comes in threes - social 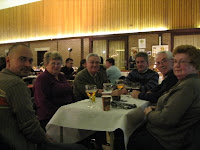 event I recently attended was also down the block. It was the town's Kerstmarkt (Christmas market.) The event was held in the town's sporthal (a town gym) where many of the local merchants displayed their homemade crafts while a band played music at one end and the bar on the other kept the festive liquids coming. There was also a heated tent outside that doubled as a bar/nightclub. That was where the younger crowd hung out while us old-timers hung out indoors. 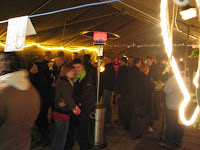 Jonas and I sat with Jan, his parents and their friends. Since most at the table didn't speak english, i was "forced" to conduct and follow all conversations in flemish. I am happy to report that i passed. The only word that snagged me was "afraid."

Yesterday I got to ride an organized MTB tour that started in Tervuren, a wooded area a few towns over. The ride started off painfully with my body still fighting for more recovery time but i persisted and soon enough my body responded. I got to ride tempo for a while and really enjoyed the effort. As an extra motivator halfway through the ride, I heard the loudspeaker from the live cyclocross race in Overijse as we rode near the course. The juniors were racing.

The rest of the ride was spent laughing and playing in the mud. It was an excellent experience right up to the last few meters of the tour where we had to climb two mini but steep bumps. It was right in front of a cue of riders waiting to wash their bikes while simultaneously watching for casualties so of course i had to make it. After successfully clearing the bumps, I was jumping up and down in my mind while fighting hard to keep the "I clear this stuff all the time" look on my face. Jonas followed behind and did exactly the same, he confided in me afterwards.

After the ride we washed the bikes, cleaned up and ate our huge-ass bowls of pasta while watching the Elites race in Overijse on TV. It always feels better to watch bike racing when your legs are tired from a good ride.
Thanks for reading!
Posted by PEANUT at 7:49 PM

You know you're tough when you don't know the meaning of the word 'afraid'.
-- E.C. Chamberlain

I'm "afraid" I enjoyed this last post the most. It is very cold, -8.33 celcius and windy. So I enjoyed your blog even more as I get ready for bed. If I don't connect with you, You and Jonas and family have a wonderful Christmas.
rickie

Maybe I subconsciously refused to learn the word.
Thanks for the christmas wishes rickie. you too!

I am so glad Sven Nys won - he deserved it! Those cookies sound good, if you have time, could you email the recipe or post it? Do you want the Zwarte Piet pic by email?

I love this interview. It really cheers me up and makes me laugh.

Hey amy
I will email the recipe over shortly. I can copy zwarte piet off your blog i assume. Thanks! My next cookie experiment is to veganize my great grandmother's butterscotch cookie recipe. I will try it with ground flax which seems to work really well with cookies.

cookie monster here... I want cookies, cookies, coooookieeeees! Ok, I got that out of my system.. oh wait..I want more coookieees. There, much better now. I think I will have piece of apple pie I baked yesterday because I have no cookies.
cookie monster

I made the most amazing apple pie recently - when the belgian journalist was over here interviewing me - and it was scrumptious! Very moist and fat free. I replaced all the margarine with applesauce.