Getting the job(s) done

The last two weeks have been super busy - multitasking up the 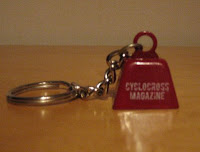 wazoo. Is that actually a word? After Roubaix World Cup, i started doing more group rides, mountain bike tours, fixed gear rides - basically playing with others on the bike.

The most exciting of all these rides was last Tuesday's Beginendijk ride. This group ride is so large that it is usually split into three or four groups of fifty riders. The cops demand that it be split for safety sake. This and many other group ride rules are strictly monitored by a couple of ride leaders who are about 60 and 70 years old - the average age riders on this group. But instead of riding at a pace of 30kph like my local old mans ride, these guys haul ass at 35-38kph average. And after the official ride of 80-120km is over, many continue for another 20km for race simulation. Very cool.

Anyway, last tuesday i was in the second group. About an hour into a painfully slow group ride crawling at speeds of no more than 32-34kph, the two guys leading our group did the unthinkable - they led our group in overtaking the first group - fifty riders passing fifty riders. 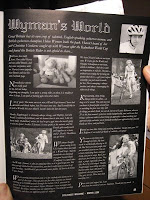 Apparently this has never been done in all the years this ride has been taking place. The rules of the ride would never usually allow it - i say usually because there was something unusual about our group that gave us permission to bypass the rules. Sven Nys. Ruler of the cyclo-cross world, an actual God in Belgium. He was one of the leaders of our group. We flew by the first group at turbo speed. It was so fast that i didnt realize we were overtaking group #1. I thought instead it was possibly my local old mans ride that was coincidentally on the same road.

After we overtook the group, there was a bit of confusion because Sven veered us off the set 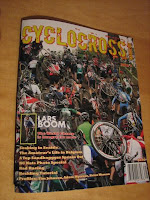 course onto some side roads. Minutes later one of the Group Monitors rode up alongside Sven. I thought for sure he was getting repremanded. Jonas disagreed. A couple of days later, while on the group ride I found out Jonas was right. The group monitor confirmed that he was just informing Sven of his wrong turn on the course. Yeah, if it were anyone other than Cyclo-Cross God himself, there would have been hell to pay. Coincidentally later on that night, I had the chance to talk to Sven and he was pretty casual about it, saying "Yeah, the first group was driving too slow, huh." (I was talking to Sven to get his thoughts on Cyclo-Cross World Championships this Sunday in Hoogerheide, Holland. If you want to read all about it on Cyclocross Magazine, click HERE.

In addition, if you want to read more Pre-Worlds interviews of racers, go to http://www.cxmagazine.com/. Marianne Vos' is up there now, and within a day or so should be interviews from Hanka Kupfernagel, Helen Wyman, Gabby Day, Nikki Harris. I think that was it.

On a side note, I just submitted my next column for VegNews Magazine. I am still so excited to be writing for them - what an honor. And my boss Aurelia is great! And if you love to look at scrumptious food, VegNews has a food blog as well. Click Here for it. I have gotten lots of meal ideas from it.
Last Sunday's mountain bike tour was also rather special. It had 22 short steep hills. They even numbered them at the base of each hill. Included on the info plate was the length and gradient so you knew how much suffering you could expect. Click HERE to see a video of the mtb tour. By the 18th hill I started to feel my quads and ass burn while the rest of me was still chilled from the sub-freezing conditions. Just when i was ready to lay off the power workout on the climbs, I got passed by an over-enthusiastic guy looking for a two-wheeled duel. With no scheduled race for the next few days, I gave him the playful head-nod and off we went, tearing it up the next climb. I won. Gosh, i am so petty. Hey, but a win is a win. teehee. 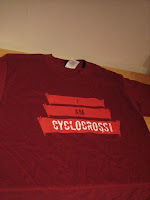 effort. I was out the door at 9am, took a bus to Leuven to meet up with Cyclocross Magazine top guns Andrew and his wife Maissia (i am sure i killed the spelling) for breakfast. They gave me a couple copies of their latest magazine - the one with my Lars Boom interview, a teeny tiny 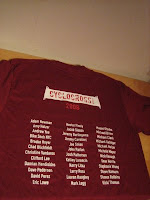 cowbell keychain made by Cowbell.com (ask for elizabeth if you contact them - she's sweet), a Class of 2008 Cyclocross Magazine tee with my name listed on the back, and a very cool 2009 Cyclocross Magazine calendar. After talking a kilometer a minute I sprinted back to the bus stop to go home.

Once home, i headed right to the computer to call Hanka Kupfernagel for our interview. She was in her car on the way from Germany to Hoogerheide. After a great talk, i put the headset down and got my clothes on for the Beginendijk group ride. Since i was running late, we drove there by van. Once the clothes were on and water bottles filled, we got into the van and drove, arriving with five minutes before departure. When we got home, I again headed directly to the headset and called Sven Nys for my second interview of the day. I took a brief pause to shove a bunch of macaroni in my face then went to work to transcribe Sven and Hanka's interview.

Today was the most relaxing day i've had in a while. I spent part of it in the kitchen, a therapeutic place for me, making pumpkin scones and lasagna. Went for a bike ride, showered then sat down to a large slice of pumpkin scone with maple syrup and washed it down with red wine while reading my friend's first novel - thoroughly entertaining!

Thanks as always for reading!

Christine,
Wow, it seems you have been riding and enjoying the bike a lot lately. Hopefully, I am suppose to get my first cxmag, the 5th addition, but still haven't gotten it. Our city has been devasitated by an ice storm. All the trees in the city have been broken, and many very large trees have exploided in the night. I have three trees on my house as I type. I have been without eletricity for 4 days and it just came on in the last few hours. The city looks like it was bombed with ice and tree parts falling everywhere. Scarry. Anyway, tomorrow is suppose to be 60F. Go figure. I plan to get out and ride. Have experimented with bike and pedal setup after some over use injury. Andy Pruitt's complete Medical Guide for Cyclist is a great book. Check it out. Good to have the internet again.
rickie

Turned 51 Tuesday, the start of the storm. So the days I took off were spent in the dark.

Wow rickie! What a horrible storm you got caught in! Glad you got your electricity back! And best of luck with your bike fit. My bikes fit me but i sit funny on them - a whole other problem!

I rode with the Trinity on Thursday, Lance, levi and landis. All in CA for the Tour of California!

Dream a little or a lot?

Hi anonymous
What is a trinity? and are you in the Tour of California also or did they happen to ride past you and you crashed their ride? Was it a charity ride? Great for you!!!

Great ride with lance & levi yesterday in Santa Rosa! NO TOC! U23

Thanks for explaining. Levi is one of my favorite riders and lance is a supergod on the bike. Did you get to talk to them? That would be cool. (on a side note, as i was in the waiting room today at the doctors office i sat next to an 17 year old kid reading a book - using a lance armstrong trading card as a bookmark. i thought that was very cool.)
I wish TOC would have a U23 stage race and a womens stage race. As a U23, do you find enough races or do you race mostly with the older guys? here in belgium there are usually at least once a week beloften (u23) races as well as weekly races where the u23 race with "elite without contract."
Best of luck for a great season.