Heerlen down, Oostmalle to go!

Here is Cyclocross Magazine's coverage of my last race.

The second and third photos below were taken by Hugo de Spiegelaere. First and fourth by Bart Hazen

With only two races left to the season, my sole mission for the GP Heerlen in the Netherlands was to have fun. I expected no miracles in fitness but hoped for luck on my side. This race 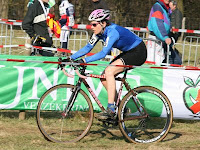 contained neither. Twenty seconds into the race, we hit a sand section and I was knocked off my bike. A girl came up from behind and somehow managed to squeeze her body between me and the fencing. In hindsight, I guess she didn’t manage to fit as I ended up involuntarily moving out of her way. There was a small upside of my crash though - it was suddenly easier to focus on my mission again of having fun. What made it even more effortless is that there were so many people cheering for me throughout the course. There were even fans who knew I was from California, cheering to me that I seemed ready to go back to there for vacation. If I ran faster out of the course’s famous “cave” I guess they wouldn’t have had so much time to chat with me. Just a thought.

I did put in a serious effort on the last lap after the disappointment of getting nailed in the first lap faded. I went from fifteen seconds behind a girl in front of me to finishing 35 seconds ahead of her by the finish. Funny how an intangible thing like motivation can create something real. Again, just a thought.

The infamous cave is like an oversized bowl. You dip into it, then back out on foot up a steep slippery mudslope, cross over to another dip, ride across the sandy bottom and then head back out on two wheels, but slowly since it is a tough power climb. Just when you think you’ve had enough ups and downs, the course takes you down below again only to deposit you at the bottom of a 28 step staircase. They’re the wide ones that require two steps


The other interesting aspect of the course was the start/finish. It is just uphill enough to light your legs on fire (think 2007 Kansas City Nationals). Sprinting for placings up the gradient is like no pain I ever felt on a flat straightaway.

In the men’s race, the real star of the day was

Holland’s Richard Groenendaal of AA Drink. Since the announcement of his retirement a few months ago, every one of his races has been treated like a retirement party. It is his last race in Zolder, his ultimate showing in Scheldecross, his last time attending a GVA race, his final Superprestige event, his ultimate appearance in Holland. He has always been one of my favorite riders. I have known of him for years since he played one of the leading protagonist roles in dozens of cyclo-cross videos Coach Elmo lent me when I was just starting out in the sport. I will surely miss him. And even though there are many Belgians who will never publicly admit it, I am sure they too will miss his animated riding style.

Next week is the last race of the season for most of us here in Europe - Int’l Sluitingprijs in Oostmalle, Belgium. I look forward to that day, since the post-season bash is held that night. All the superstars of the sport usually attend. Now to figure out what to wear…


Thanks for reading. Drop a comment if you have attire suggestions!
Photo Gallery, go to Cyclocross Magazine's website
Posted by PEANUT at 11:15 AM

I hope the Doctor visit went well. I am not well today and took the day off. Some get in shape by racing, and some get in shape by training alone or with a group. Regardless, Cross seems so extreme and it must take a terrible toll on the body and is probably at such a high physical level that it is probably hard to peak for and difficult to remain at the best form through out the year. I would imagine that every single race is different. So any one with the courage and drive to be out on a course like that needs to be congratulated. What is great is it is something you love which is the most important. Keep up the good work.
rickie

Sounds like you enjoyed yourself - can't wait to hear how it went in Oostmalle - we watched the men's yesterday afternoon at my in-law's.