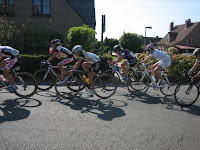 Yesterday i did a criterium in West Flanders called Avond van Zonnebeke. I normally wouldnt travel a whopping 1 1/2 hours in a car just for a local road race (yes, we are spoiled in belgium), but it was a crit - my favorite of all road races. It was 40 rounds of 1.75km. And bonus was the slight rise every lap.

The first 30 or so rounds went well. I felt fresh and even briefly showed my face in the wind a couple of times. But then I hit a wall. I dont know if it was the heat or 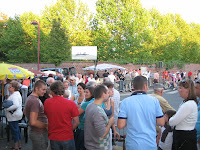 maybe i went too deep in my cyclocross workouts lately but it surely didnt feel good. Thanks to the mini climb i was able to relax a little every lap and stay on with the peloton for the sprint, although my sprint was more like slow motion. I got out of the saddle and went through the physical motions of a sprint but my actual speed was more that of a cyclotourist.
It was the tiniest field of the years with only 25ish starters. I finished 18th - yes, only 18 finished the race. I won a total of €22.50; €12.10 start money and €10 prize money. Did you hear that two days ago Contador won a criterium here in Belgium? He was paid €50,000 start money. I doubt even Marianne Vos gets close to a fraction of that from any race organizer. And she has a much better finishing salute - possibly the best of all bike racers. It is so animated it can bring tears of emotion to the 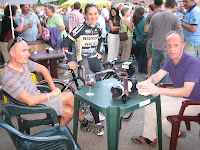 unsuspecting.
The real superstar of the day was a british gal who basically motorpaced us the whole time mainly well over 40kph, except for the climb where she lowered the pace to the mid 30's. Then she whipped us all in the sprint. I heard she is World Champion on the track. If you see her, she even LOOKS fast - long and thin like a greyhound. Unreal. 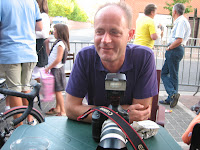 After the race, Jonas and I met up with Krist for a drink. I had my usual Ice Tea. Then i tried a Bellevue Kriek beer - it is a girly cherry beer that is usually more sweet than alcoholic. Bellevue was just the opposite so after two sips - one to try and one to confirm - it was over.
Next race is this Sunday. It is a 6-hour MTB relay race with jonas, ronny, kris (jonas' sister's husband) and me. I will be the one with the cross bike. Theoretically my cross bikes and clothing arrive this week so i may get to test them out in the race.
Posted by PEANUT at 5:04 PM

forgot to tell the superstar of the day gave some rounds of hamburger after the race :)

That was too funny. She must be young. you know how young people can do anything and get away with it? or until they get a little older and it all catches up with them. It was great to see you Krist. too bad i couldnt get a photo of our cameras side by side. BTW, the foto of the betting chart was somehow deleted by my camera so i couldnt post it on my blog.

Not so many track world champions here in the UK this year... so I'm wondering who she could be... [I'm thinking Houvenaghal (sp?)] and how much start money she would get?

What odds did the bookies have on you?

her name is roswell. I bet her start money is the same as mine.
I dont know what my odds were. Only three old guys grabbed my legs before the start so maybe only three bet on me? (i assume those leg-grabbers liked what they felt.) haha

So that is how they work out the odds? Nice firm thighs! :)

Jo Rowsell. Sure, T.P champ. So much for being a world champ, What if she were a male World Champion?

Love the picture of you racing! the second picture has a notice board in the back ground, it has the word Paschendaele on it. Is that where the race was?

Oh yeah and have fun on Sunday. I have a 140k sportif as my last road event before my foreshortened 'cross season.

[quote]hey chris,
thanks for posting on veerle's blog! very sweet of you!

I tried to post on your blog at beginnertriathlete but i cannot even find it or your name, embarrassingly enough. how do i do that?

YW. Hey she's your team mate! Beside's I may need you to interpret some of her entries :)

I'm wondering if you need to register if you want to post at Beginner Triathlete? my 'username' is chr15 tree and a link to my blog is

it is 'just another way to procrastinate'... I may start yup the other blog again soon as I attempt to shed some the comfort eating pounds I have gained over the past few months and get 'race' fit again.

I cramped up again on the last climb of my sportif, story of my life, meaning I had to walk/run it again... How did your 6hr adventure go?