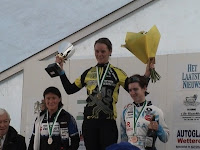 Peanut! I went to a cyclocross race yesterday here in SoCal (SoCalCross.com). It was super fun watching them all ride around. Not quite the mud-bath as most other courses in the world right now, but at least there was lots of sun in its place. I kept wanting to yell Peanut! as the riders went by but figured they’d think me crazy… maybe someday I’ll get my chance. Hope the World Cup went well.

hey jonah
I started racing cross in california which you now see is not a big deal in the winter. I wish it were like that here in belgium too but no such luck! haha. but the mud does help race photos look cooler - haha! Glad you had a lot of fun watching! Thanks for the virtual cheers! Hope one of these races i do get the chance to hear your "peanut"s. very kind of you. my world cup was not good, but i wasnt surprised. just as my fitness is coming up i got the largest saddle sore in the world. my doctor wanted to hospitalize me for 3 days but instead i raced. Denial is a powerful thing...I write while sitting sideways on the couch to keep the pressure off my ass! take care.