I earned an F for spectating

Recently I watched my friend, Hilde Boon, compete in her first road race in 14 years! She is a mountain bike marathon specialist so I had to check out her re-

debut in the skinny wheeled short course - a kermis (longer than a crit but shorter than a road race) in Steenokkerzeel, Belgium - close to my home. She did not disappoint!

When she rode up to greet me, the first thing i spotted was not her huge smile or even her fancy new road bike but her white lace bra in clear view under her white-topped skinsuit - sexy! Now THAT'S the way to race bikes while holding onto your femininity! What made it even better was that she knew it showed but didn't care.

Since I spent all last year racing for Belgian Pro Team Lotto-Belisol, many of the faces at the event were very familiar. I felt like I was returning to the office of my previous employment - a 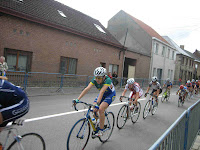 mixture of happy/sad emotions. Having never actually returned to a previous job for a visit, I would guess this is what it would feel like.

Although I really enjoyed running into my favorite people from last year such as Guy - the owner of Belisol, Adeline - my cycling buddy, and Liesbet DeVocht and An Van Rie from my previous team, it felt weird to just spectate. I wasn't at all comfortable with simply sitting on the sidelines watching.

Last year, I raced this event and came in 2nd - lost to my breakaway partner in a sprint finish. After crossing the finish line, metaphorically pounding my fist on the handlebars I swore I would take revenge the following year. But there I was, on the sidelines, yelling, "Allez, Hilde, Kom on! A bloc Adeline!" Oh crap. Well, the other option would have been to race it, not win and be spent afterwards, delaying my return to fitness once again. With that firmly back in the forefront of my mind, I happily cheered every lap for my friends.

While two of my former teammates, Ludivine Henrion and Grace Verbeke finished in a two-up sprint thirty seconds ahead of the field, Hilde jumped the field in an attempt to snag the last spot on the podium. But her timing was a little off and she was swallowed up within fifty meters of the line. I give her a lot of credit for giving it a go, though! It takes courage to take a chance at success knowing that if you fail, it is almost certain that you will fail big!

After the race, we all went for a drink to hear Hilde's detailed account from the trenches. The story I loved most was Hilde's encounter with one of the Debout sisters - the grote (large) one of the three who race. It was the same gal who tortured me when i first started riding in belgium (until I got her back at her same 'power position' game and put her in the gutter - hehehe. After that, she never bothered me again and now even goes out of her way to say hello!) This same gal was teasing Hilde about her lace bra while simultaneously trying to bully Hilde out of the way to take her spot in the strung out peloton when the pace was high. Well, soon enough the gal learned not to mess with Hilde as well. I wish i could have seen that.

Somewhere between our second and third round of drinks (coffee and coca cola of course), Hilde's boyfriend Mark and An Van Rie's boyfriend realized they were related; it turns out they are second cousins. They spent the next couple of drinks exchanging stories they've heard about each other!! Strange.
Posted by PEANUT at 5:50 PM

Actually, I'd prefer a pro female racer wearing thongs under shorts over white lace bra under skinsuit. More motivation to stay on wheel, while lungs burn.

uhhhh....I'm glad you mentioned the bra because it was the first thing I noticed when I clicked the pic...but I guess that is the point, even better if you can back it up with the legs....

An F for taking pics as well.. I would have loved to see her face instead of the back of her helmet :)

What, is it turning into PEZ here?

Peanut, ya should go read their nice little article on how to take a daily distraction picture.

That photo of the bra captures enough to fuel the imagination a bit but... i don't think it'll get ya a pair of socks ;)

The comment about the Debout sister made me laugh. I just spent two months racing in Belgium with these sisters. I was also tormented by the grote one. It became hard to take. My tactic was to simply stay ahead of her.