It's All in the Header 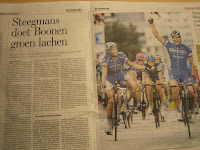 For a few years now, I have been a columnist for the Marin Independent Journal, a San Francisco Bay Area newspaper. I have gotten them finally trained NEVER to edit my columns but what I failed to do is get them to use my column titles. For two years straight, i repeatedly tried to convince them that my proposed titles were more catchy than the ones they'd use. Anyway...when i come across an ingenious title, I get really excited! Hence, the Tour article!

"Steegmans doet Boonen groen lachen" means "Steegmans made Boonen laugh green" - TOTAL play on words!! Great stuff!!! Laugh green is an expression which means you are laughing when you really feel like crying. And green is also a reference to the Green Jersey that Steegmans helped Boonen to earn.

By the way, the general concensus here in Belgium is that Steegmans' stage win was NOT a gift; Boonen just didn't have the ability to come around Steegmans who was simply ON FIRE! When Steegmans was interviewed on TV, the interviewer asked why he didn't race for another team where he could be team leader (kopman). His response was that he would not be comfortable with the continuous high pressure that a team leader has to deal with. Fair enough.

As I am typing this, Zabel is being interviewed on TV regarding yesterday's pile-up. Zabel just copped to swerving when he prematurely released from his pedal but made it clear that it was not his fault that the pile-up occured. Hmmm...
Posted by PEANUT at 11:37 PM

i'll have to agree...Steegmans was strong and Boonen just wasn't able to get up there - Steegman's looked like he was letting off but Boonen was sprinting so hard and still couldn't move forward...oh oh

but then Steegman's had a little crash today for inattention...looked like he had food in his mouth when he fell.

hey Flandria
I saw the footage of the sprint a million times like every belgian who owns a tv or frequents a cafe and what i saw was steegmans doing a textbook leadout, waiting for boonen to come around. The problem may have also been that the finishing straight was on a slight uphill and that the leadout guy previous to steegmans may have pulled off a little too close to the finish. But even so, Boonen is still a favorite of mine as for almost every belgian here! He's also particularly easy on the eyes!!! Green is a good color for him.
On a side note, McEwen made an interview joke focused on boonen. he said that he taught steegmans to sprint like that (since he was previously mcEwen's leadout guy) so he may be the only guy who can beat him. When a Belgian is asked about McEwen, they will all say that he is half flemish - since he lives here and is married to a flemish gal; hence, when he wins it is a win for Belgium! He speaks perfect flemish.

Today Steegmans AGAIN finished before Boonen. Hmm.. Tommeke needs to win, SOON. Dunno about his eyes but what I like about him is that he has no dikke nek, he keeps his feet firmly on Terra Firma and is very good at relativating things. After all, who will remember in a 100 years, right?
Yes flandria , Steegmans was eating when he fell.

ha! Boonen is still my favorite too - I like his interview yesterday with Versus...instead of saying he is "having fun" this year, he said "make fun"...so cute