Reporting back from Belgian MTB Championships

Yesterday, I went to the Belgian Mountain Bike Championships officially to support J-rocket

but unofficially to catch a glimpse of my superhero working his magic on a mountain bike - both were accomplished! Between textbook bottle hand-offs to J-rocket, I watched Sven Nys glide through the twisty, technical course and land on top of the podium. Exquisite riding indeed. Just beautiful. If I could only get my hands on a cardboard Nys...sorry Tom.

As J-Rocket and I pulled into the parking lot two hours before the start of his race, we were greeted with dry ground and looming rain clouds. With thirty minutes to go before the race, the heavy clouds emptied on us. Jan returned from his warmup just in time to jump in the car.

From our dry vantage point, we watched a parking 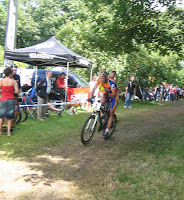 lot full of spectators and racers scramble for cover - except for one sole rider who was determined to get a warmup in. During the heaviest, chilliest period of the rainfall, he set his bike up on the stationary trainer, placed his water bottle and other various unctions on the roof of the car, and started to pedal. He lasted about 45 seconds before having to get off to collect his unctions which were dispersed all over the parking lot by gusts of wind. He got back on the trainer for no more than two minutes before packing it all back up in the car and piling in himself to escape the elements. That must have been the shortest warmup I've ever seen (not counting the non-existent warmups that even I have been periodically guilty of.) 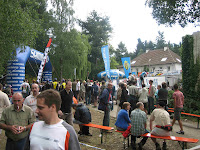 I waited as long as i could before heading up the mountain (ok, well it was actually a small hill but it felt like a mountain when taking into consideration the inclement weather and steep, wet singletrack I had to climb - 10 minutes worth, mind you!!) to the start line. Two minutes after the gun sounded, the rain was replaced with sun which put us all in better spirits. 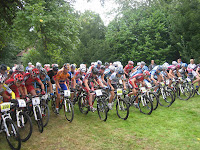 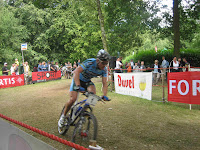 By the end of the second lap, Nys' lead jumped up to a minute. But more impressive was Pannekoek's ride. He moved up to FIFTH!!!!!!! (He is in the photo to the right, just behind the eventual 3rd place finisher.) When he passed me, he looked stong, fresh and in good spirits (based on the beaming 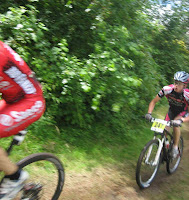 smile he flashed at me.) J-Rocket was working his way up too, looking better than he did on the drive over when he was bitching about how much manual labor he had to do the previous day on his dad's orchard when a water pipe broke.

By the third of seven laps, Nys continued to build on his lead. Unfortunately Pannekoek's glorious performance was over. He came by me in 20th position after losing valuable time due to a broken pedal. What a bummer. Since he is beloften (under-23 category), he had a chance for the title of Belgian Champion. I yelled at him to be strong and keep fighting but it's so hard to do that when you've been knocked down like that. I wish i could say i don't know how crappy that feels. Fight is what he did and he finished the race somewhere in top 20 - a fine result considering most of the field was lapped.

Another fighter was J-Rocket. He kept the battle up until the treacherous descent kicked his 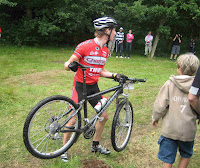 front tire's ass, causing all the air to come out. His goal was to finish the race without getting lapped. Well, goal complete. He pulled out before getting lapped - i suppose it is probably not what he had in mind. At least he lasted five of the seven laps to get a good workout in. The guy in the photo to the right didn't have that opportunity. His chain broke during a crash immediately after the start.

After the race, I chatted with Adeline who was courageous enough to give the 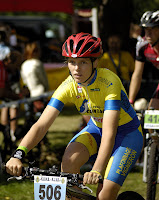 course a go - as a devout road racer AND on a borrowed bike! That was a brave move considering the highly technical terrain. She says she placed last but Jan - owner of Fietsen Goeman - pegged her as finishing somewhere top ten. I think she was being modest.

The photo of J-rocket and Adeline is courtesy of Big Bad Wolf. His other photos from the event can be found HERE. THANKS Adri!!

AND if you want to watch a video of Sven Nys crossing the line, courtesy of Adeline, click HERE.
Posted by PEANUT at 1:04 PM

Hey, I had a great weekend following the races, both as a signaller along the course and as a photographer.
What strikes me is that the percentage of attendants/finishers is best in the Womens' class, so you girls really grit it out when the going gets tough. Kudos to Adeline because she really was suffering.
The track was very tough, a 6.2k lap with 280 heightmeters/lap says it all, most of it being twisty singletrack.
I think you can see the effort in some of my pictures taken on the long climb where I was stationed. Filip Meirhaeghe complained of not being too fresh (as did Roel Paulissen who chose to stay in Italy instead of vying for this Championship - which I think is not a good pr move on his part) but kudos have to go to Sven Nys. He was super, probably wanting to silence all the folks who criticized him after deciding not to try for the Olympics. I think his preformance yesterday has shown that he IS a great mountainbiker, on this technical and difficult track. I look forward to seeing him next weekend in Tubize for the Benelux Championships.

sorry knicksgrl if you are not spam, but your post did not make sense!