Who needs nightclubs when there are post-Tour crits?

Last Monday - the day after the Tour de France, I was lucky enough to see one of the many 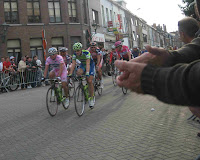 post-Tour criteriums. Even though the winner is pretty much not a surprise it is still just as fun to watch my heroes go round and round. Two heroes in particular I enjoyed watching were Bart Wellens - one of the World's top Cyclo-Cross racer and Frankie Vandenbroucke, one of cycling's infamous bad boys!

I have followed VDB's career for years - partly because he is VERY HOT but also because he is an immensely talented rider. I look forward to the day that he reaches his potential - from what 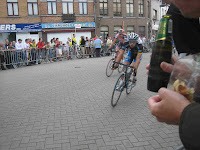 i've read, mental issues have held him back. But he must be doing something right because every year he continues to secure a cycling contract even with no proven ability to show up at races. His proven talent as a media magnet (most likely due to his looks, charm, and sordid life) must be enough to keep the sponsors interested. 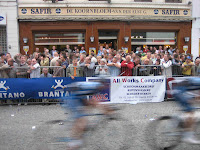 there must have been at least 30,000 spectators. The riders spent the first few laps riding at about 15kph so we could all identify our favorites, take photos and profess our undying love to VDB (OK, well maybe i was the only one!) For the remaining 50 laps, the guys took turns getting into breaks. I would have almost believed i was watching a spontaneous event if it weren't for the breaks of five guys with thirty seconds up the road getting caught in the distance of 2k on a very twisty course. 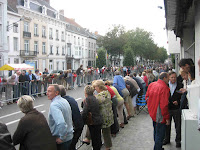 But i still had fun watching Danilo DiLuca (Giro d'Italia champion who donned his full pink kit), Bart Wellens, Axel Merckx and the rest of my favorites get into small breaks! But we all knew that DiLuca would win and yes, no surprises.

The street party surely continued into the wee hours of the morning but I left immediately after the finish to prepare for my own training the following morning!

By the way, we are finally having wonderful weather here in Belgium - 29° today! Next week they predict rain every day, though. That's belgium.
Posted by PEANUT at 10:47 PM

VDB, love him or hate him. Fact is he has thrown away his best years and his enormous talent has been wasted on personal issues.
But each time I see him, I keep hoping he will come back to at least a level that allows him to finish races.

He is pretty fun to watch racing, too. The guy can kind of ride a bike. But you’re right, Peanut: it’s a least partly the melodrama that surrounds him. He’s the Phil Spector of cycling, the perpetual boy genius — with the wives, and feuding family members, weird doctors, sham gentrification, guns, hairdoos, dogs, drugs, manic-depression, and Ronnie and Tina and Ike and and Mick and John and George and Paul and Ringo. Go VDB! Mountain High! River Low!
— E.C. Chamberlain

is Danilo as wee as he looks on TV?

Yes danilo is so tiny that i put him in my backpack and snuck him out of that joint.

Ah — you're right! "Deep." But "Low" might work better for VDB. I have to admit to being more familiar with the Saints version from the late 70s, with the vocals buried even farther back than Spector's. I'm not sure I could even hear the lyric at all. — E.C.

I guess if you just want to judge them by their looks...that's your prerogative.

I have a feeling that Grey, too, would be better acquainted with the Saints' version. Something in that grouchy tone tips us off! But Peanut's probably dancing in a field right now to Erasure's version. It takes a village.
-- E.C. Chamberlain

Yeah, E.C., how did you guess? just took off the dancing shoes - specialized brand of course.

Nefarious person with binoculars and headphones, in the unmarked van with ultra-sensitive micro-wave antennae on its roof? Exactly.
— E.C. Chamberlain

Hey grey:
It's easy for YOU to say that it is wrong to judge people by their looks when YOU are lucky enough to be born gorgeous! And just for the record, I do think VDB is cute but wellens doesn't do it for me personally. He does have a huge fan base here who just adore him though!