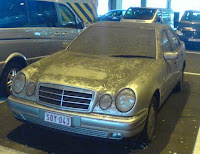 As we were walking through the Brussels Airport parking lot, we passed a car that had so much dust on it that it even shamed my friend Twig's car that regularly resides on the San Francisco streets.

Apparently the rumor behind the airport car is that it was left behind when its owner was killed in the Tsunami that occurred about two years ago. I guess they keep

the car there in honor of all the lives that were lost. I find that kind but creepy.
Posted by PEANUT at 10:56 PM

Hmm, urban myth no doubt.
The family of the owner would have long sold it.
Could be some drug trafficking car with a corpse in the boot.

Inquiring minds wanna know how you can be riding in marin county and be at brussels airport at the same time..
loopy

Yeah, it could be an urban myth. But it is strange that the car has not been moved in two years!
Hey anon: have you ever seen an episode of Star Trek?

KA - Perhaps someone lost the car?

HAHAHAHAHAHA!!! QUITE POSSIBLE!!! That is too funny.

That's a GREAT idea! THen we can add it to the Vanderkitten collection of motorized vehicles we already have including the Mobilehome, van, and scooter! I will post photos of them when i am back! Yippee!!! Traveling in style!

Wow, that car sure is dusty.. makes you wonder what we all breathe ..
Star Trek yeah, I should have knowN..