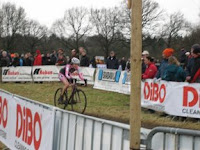 bombed it. The good news is that my concussion symptoms were almost nonexistent. Bad news was that i was completely out of racing shape. And on a heavy course like Hoogerheide where most of the lap was covered with thick heavy leg-zapping mud or thick heavy unrideable mud, it was hard to hide it.

But my riding aside...it was really exciting to hear so many american voices out there cheering for me! I so appreciated it. It did catch me by surprise, though to hear "go vanderkitten" with a

non-belgian accent! (When pronounced by the flemish, it sounds more like "Von der KIT tin" - with a slightly rolled r in the 'der'.) I think a lot of the Americans were there because they just raced in Masters World Championships the day previous in Mol, Belgium.

(To the right are photos of two of my favorite riders, Susanne Juranek and Gabby Day.)

One American who had a great ride - in fact just in time for World Championships next weekend - is Jonathan Page. He was in the lead group for most of the race, finishing in 8th! Katie Compton apparently was unable to race due to a muscular problem. I really hope she is better by next weekend to take the Gold. If she doesn't, I put my money on Hanka Kupfernagel.

For the men, I suppose Holland's Lars Boom - today's winner. It would be cool to see Bart Wellens win though. He placed 2nd behind Boom today. If Boom falters next week, my cool pick may just come true.

After the race today, Wellens said, " I came here after a heavy training week and my victory in Zonnebeke (yesterday) not with fresh 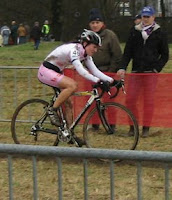 legs. I knew in the first half hour I would have to fight myself. On a course like this and with this wind, it's important to ride one tempo pace and that's what i did well the whole race."

Wellens doesn't write off Nys though even though he placed 12th today - "Not after two poor races. But i'm focusing on myself." Regarding Wellens' World Championship preparation, Wellens added, " It is going better than planned."

After watching Nys' performance today and last week at Lievin World Cup, it breaks my heart to say that his chances to top the World Chamionship podium is looking slim. "I gave what i had but it didn't go. It doesn't look good. I constantly ride just below cramping level in my legs. There is no power in my legs. It's going very bad. I don't have an explanation for it. I don't feel ill. But maybe i have to go and see the doctor," stated Nys after today's race. He added, "Seven days before the world championships this isn't good. It's even a catastophe. I don't feel like I have a chance. I can't fight for victory and I'm counting down the laps."

Erwin Vervecken was quite pleased with his 3rd place performance today. He's been slowly improving over the last couple of months in order to have a chance at defending his title at Worlds next week. But he's not sure if seven days is enough time to bring his form to a boil. " Vervecken said, "Today i met myself in the last two rounds."

Vervecken is in agreement with Wellens that Lars Boom is the favorite for the World Championship title. "On the pavement, he(Boom) rode me off his wheel. And he had a lot of reserve energy; he is sitting on his bike with his hands on the handlebar and constantly looking back," Vervecken added.

Nys coach, Paul Van Den Bosch, had a few words to add about Nys' performance today - "He's not really surprised. I feared this already in October. For a long time, Nys is sitting at top form. Then of course there is chance of a dip. This was the worst of what i saw of Nys in four years time but he is no super human. He started mid-May on the road and on the mountain bike. Then it's not abnormal that, for once, the candle burns out. But we don't throw in the towel. He must now rest, rest and rest. He won already 21 races and is qualified for Peking [mtb Olympics]. Don't count him off for the World Championships."

But as we all know, almost anything is possible a week from now.
Posted by PEANUT at 10:13 PM

What would I rather be doing:

Tough choice, but I would have to go with A.

I'm not following you BGW. What does the ??? mean?

...oh, i had left a "coach-ish" post at the soup-site regarding upcoming worlds, then your next column made me realize you weren't 100% yet, so i then apologized if i was bein' pushy...

...just used to you responding to us all more but no worries...the bottom line ?...best energies to ya for treviso...

Hey BGW:
Sorry about not responding to all the replies you and others have made to my post. I do SO appreciate the comments. But with my head, bright light has been painful so i have kept my computer use to the absolute minimum. The only reason i kept the posts up is because i know there are actual people who read them! All other writing gigs i have been doing the old fashioned way - paper and pen. Then transferring it to computer once it's complete.
By the way, since i knocked my head the first time so early in the season (November 2) my results have suffered badly since then, so NO world championships for me this year. yes, i am bummed but one week to gain form - coming from BELOW zero - would be rather impossible. But thanks for your positive thoughts!!!!!

Thanks as always for the wonderful posts giving us a glimpse of racing bikes for a living in the Belgie!

...inadvertently stumbled across your excellent 'winter into spring' column in marin's IJ last nite...didn't even know you were still writing for them...

Thanks Chris - and to ALL who've read my blog - for your appreciation. It means a lot to me!
And BGW, yes i am still writing my column for the Marin IJ. They are a great newspaper - i especially love my boss, Dave - he's an easy person to work for (never edits my columns or tells me what to write about).

Still lookin' Fabulous!! =) And hey, if you're not gonna win, lookin' good never hurt anyone!

Thanks for a kick-ass season, Christine! It's been a crazy ride and seeing our name in Europe just awesome!!!

We need to catch up soon! Jennie and Raycer say "HI!"

hey dave, jennie and little Raycer:
Yes, I am surely "best dressed" of all the racers! At all the events, I am consistenly surrounded by people checking out me and my bike.
At the end of february, the Vanderkitten Fashion Show relocates to NYC for a week on media tour, so we need to work out details! Yippee!

About Nys, don't write him off yet, for once he is not in the favorite spot.. and I think he revels in that. Don't count Enrico Franzoi out either.. he is at home and is practically sleeping at the Treviso tracks for the last few weeks. I also expect Francis Mourey and obviously Bart Wellens. And Vervecken is always a forec to be reckoned with at champs..

As you know, today nys admitted that his pressure was replaced with doubt. He thinks his bad period is over but even he admits that he won't know for sure until he races. (based on an interview on the radio of the top 3 belgian favorites - nys, wellens and vervecken - all of whom named Boom as the guy to beat.)