Can it really be Spring in Belgium? 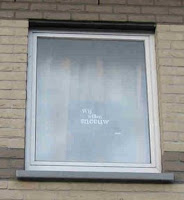 got a flurry - but it's been hovering just above freezing for quite some time which is almost as bad for riding.

But for the past two days, the sun's been so strong that I have even tempted to remove the glove liners and fold my earwarmers up to expose my ears to the rays. Considering it's been only 8 degrees C (46 deg F) I didn't go crazy and kept the clothes on. But i did sit outside for a coffee yesterday in Tervuren. 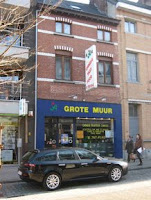 Our cafe was right across the street from a Chinese restaurant named Grote Muur (big wall). When i saw the name of the restaurant I laughed so hard i could barely hold the camera still to take a photo! After finally taking the shot, we received the bill from our cafe...named 'Wine Not'. What's the expression..."People who live in glass houses shouldn't throw stones"?

Next we headed back through the Tervuren forest for a stroll around the pond. The paths were riddled with kids due to holiday week in Belgium, so we kept the forest stroll brief for fear of being taken out by a flyaway skateboard, frisbee, loose dog or twirling two-year-olds. 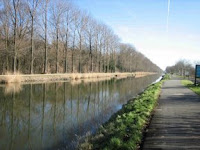 Today we rode along the canal that starts at Leuven, right at the Stella Artois Beer factory and runs up through Mechelen and beyond. There are two paths on either side of the canal - both 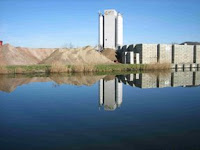 great for motorpacing (so i've heard because that would be illegal.) It was the first time in a while that I was able to look up at the views instead of focusing on avoiding all the puddles, wet branches and mudpies.

On every single ride so far in 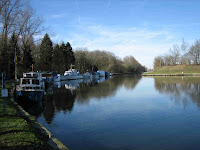 Belgium, I pass cows, sheep, ducks, geese, chickens, goats, ten types of birds, cats, dogs, horses, donkeys, miniature horses. But today we passed a llama. That was almost as strange as the first time I saw three deer in a neighbor's backyard. Up until then, I had no idea that people keep them as companions. 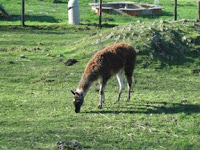 Have a great weekend! I will be spending it pre-riding on Saturday in preparation for Sunday's race in Heerlen, Holland. It's another big UCI international event so i expect the crowds to be enormous and the competition fierce. I have packed my whoop-ass so I'm ready to go! I still have yet to figure out what whoop-ass means but i love how it sounds - intimidating as all hell!
Posted by PEANUT at 8:52 PM

Don't leave the whoop-ass in the suitcase. Go Peanut!

...fri. evening here & you won't see this 'til ya get back from heerlen, so i'm hoping you'll have had a good solid race...

...you mentioned a taste of spring & i have to tell you, we just had our first real spring day...thursday morning dawned as one of those only in marin, clear blue sky, every little bird singing it's joyous heart out, beautiful sunny days...spectacular...

...as the day evolved, it kinda went back to being winterish, but friday started out amazing again & stayed warm all day...bit of haze but wow...

...anyway, you know the patterns & we WILL get more rain, but i honestly think these few days are just lifting everyones spirits...

...after going from 'drought conditions' to about 120% of avg. yearly rainfall in a matter of weeks, the sun is well warranted...

I've heard the "whoopass" term only with a unit of a can. - open a can of whoopass

it seems many of us around the world are getting our first taste of spring - except for my friends in Austrailia who are sweltering and my dad who lives in West palm beach. I called him the other day and told him he's welcome to visit me. he responded, "Honey, i may be crazy to move to florida but i'm not insane enough to leave this 30 degree weather for Belgium right now." Yeah, point taken. But maybe he'd visit if i opened up a can of whoop-ass on him! (did i use it right this time?) Oh, and i'm drinking a Stella tomorrow - after the race in 14 degree sunny weather. yum.

Cyclingnews.com has the men's results but not the women's (another topic I know). I see JP got 4th. How'd it go?

9th. considering I completely botched the start end hit the dirt absolute last, I was happy with the result! More info on the race soon! Thanks for asking.

One of these I'm gonna go ride along the Leuvense Vaart as wel..will be a nice change from all my hilly rides over the language border..
Are you racing next weekend?

I may race in oostmalle this sunday assuming my head remains stable!