What a hectic weekend...

filled with riding and talking, my two favorite activities.

Last Saturday started early with a 9am flemish language class. It was my first class so i was really nervous. The three days leading up to it, i used all my free time to study hard - for at least ten minutes a day.

When i walked into the building, I asked the secretary where the class was (of course in my best dutch.) As she got up to walk me to the classroom, she turned to a guy who was sitting in front of her and said, "this one was easy" in dutch. She deposited me in a room filled with 5 students and a teacher. I immediately introduced myself and told the instructor that i had to leave early for my first cyclo-cross race of the season (all in dutch). When he responded in dutch and continued with the class in dutch only, I realized what the woman meant when she said "this one was easy." She was referring to which class I belonged - beginner or advanced. Somehow instead of going to the beginner class which was where I planned to go, I ended up in the advanced conversational class.

It was scary at first since the majority of my conversations thus far have been with little kids and old people. But it went well. Everyone spoke real slowly so it was relatively easy to follow. I even found myself talking a lot. I owe most of what I knew to the Simpsons TV show, the same way that Belgians learn English - reading the subtitles. Every time i watch tv, i read the subtitles in hopes of learning some Dutch. I guess it worked. It did feel funny saying the words aloud that I have only read on TV subtitles.


After 1 1/2 hours of language class, Jonas picked me up and we headed directly to the race. That class gave me enough courage to speak Flemish to everyone at the race site and I swear I understood more that day than ever before. If only i could get everyone to speak as slowly as they do in class.
The course was laid out on a cow pasture. The trails were almost completely covered in bumpy ditches and cowpies. Even the one "good line" around the course was only slightly better than the rest of the course. This made it very hard to pass people. But it did give me lots of practice on that type of terrain that seems to pop up often in races.

They ran the womens race with a mens 35+ Masters, as they sometimes do. My start was a little slow because i got caught up behind a guy who refused to be passed by a girl. By the time i got around him on the second lap, I had exhausted myself both physically and emotionally. I had forgotten how exhausting frustration can be - never again. With 2nd place (Anja) only 10 seconds behind I focused all my energy on pushing myself as hard as i can to build a significant gap on the hard-charging gal.

A bit later I looked at my watch to confirm that the race is almost over, only to find that I had completed a whopping 15 minutes - 30 minutes left! Just as I was fearing that I would lose the motivation to keep up the pace for the rest of the race, I was passed by a guy who was traveling at the perfect pace - slightly faster than I. He was like a gift from the cyclo-cross gods.

As we pulled into the grassy field just before the finish line, he asked me if i wanted to sprint. At first I laughed, but then I gave it a go for fun. My sprint turned out to be exactly the same speed as our pace. We (Jan and I) finished 18th and 19th in the mens 35+ category while I got extra bonus money for 1st woman. Total prize money for the day was 10.50€ - 8€ 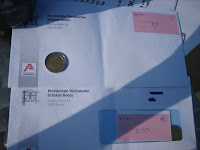 
Overall, it was a blast - a great way to start the season. The organization VDN - combined with belgiancyclingselection's Ludwig Gladines efforts - put on a great race! It was lively, fun, ran smoothly, and offered De Koninck

beer in their "beer garden". I am not sure if it is still called a beer garden if it is only alonside the course and doesnt have the course go through it as was the tradition in Belgian cross races up until three years ago. The UCI made this decision stating that it was unsafe for the riders due to the temperature difference inside/outside the tent and that the riders may get hit by a beer bottle. They based their info on a quote made by Richard Groenendaal that was taken out of context. Pity because they were a lot of fun.

After a shower and change of clothes, we sat at the cafe and watched the mens event. As I sat there waiting for Jonas to bring our drinks to the table, I thought about how thrilled i was to feel relatively recovered so soon after the race. But my thoughts immediately came to a crashing halt when i tried to raise the glass to my lips. My arms were so worked from all the bumps that it was an effort to lift the liquid. The pain was well worth it all.

Thanks always for reading!
Posted by PEANUT at 10:50 PM

Christine,
Great blog! I got a kick out of your learning flemish from Bart Simpson cartoons. When I watch any foreign film such as swedish, french, or even japanese, it is like my brain hears english while I read the subtitles and it is like my brain knows these lanquages. I don't even notice haveing to read the subtitles. Nemo gets her new fredestein tires tomorrow and I bought her a new chain. I will send you the photos. The work gig with sponsoring me is going to work out great. A bunch of people are getting together to help me and they are all bringing their best dessert recipes to have a dessert auction. Pretty neat. I was hoping I could get a vanderkitten jersey before the ride, but I don't think they will be ready. I would be the lone fat cat rider on this side of the pond riding in the Tour de Cure! I must get some new shoes as the concrete at work is killing my knees and legs. My legs hurt after working all week on my feet, but they come around after being on the bike. Thanks again for a great blog.
rickie

Nice victory salute. Could the woman spectator in the picture at least LOOK interested?

Nice job! No Vanderkitten this year? Maybe I missed it, but do you have a sponsor lined up for the season?

Hey rickie
Glad to hear it is working out at work for your upcoming ride.
too bad you are not my jersey size.
gcdavid: As you know, many spectators look like that if you are not their sole person they came to cheer for. No hard feelings though. At least she looked - haha.
Erikv: You guessed it. No vanderkitten as of that race. I did have a team lined up but as of just recently they pulled out. Teamless. Now i am in search of the standard-issue black skinsuit.

Perhaps you should give this guy a try... I'll be wearing his kit later this year

Ah hell, who needs a team, looks like there is big bucks out there to make winning those races...

Great report (as always) grassy field really can take their toll on your arms eh. You could have always asked for a straw with that 'beer'.

Good work on the Flemish. Holding your own thrown into a conversational class like that!

Oh yeah, and the UCI taking the beer tent 'tunnel' out of the races SUCKS! What an brilliant idea.

No Vanderkitten??? Who do we write to to suggest (no, DEMAND) a sponsorship?

Good job on getting in the advanced class! Woo hoo! I wish I would have had the Simpsons to learn from way back when - I had to make due with the Flemish version of Family Feud! (But Koen Wauters was the presenter so it was slightly cooler than the US version)

Hey GCDavid and chr15 - you guys brought tears to my eyes with your kind yet amusingly thoughtful gesture.
If i wore the Unattached skinsuit, Belgians wouldn't get that i was looking for a team - they would just assume i raced for Team Unattached. They may wonder what kind of products the company Unattached made, though.
I am hopeful, though, that something may still work out.

Check out the new whiter than white bar tape. I'm still awaiting the tires, but they should be here in a few hours.
Just click on the photo and it will show you a larger version.
http://rickierainwater.blogspot.com/

Contact Adam Myerson here in the northeast. You can start Team Veghead or something (he is a vegan too).

Seriously, what gives with VK? You're great representation for the company. I'll send an email.

And I'll give you $75 if I get to choose where my name goes (Jonas may get mad).

hey gcd
Thanks. There is actually a team called Organic Athlete but unfortunately, with every non-profit-type organization, there is usually no money for even clothes. I am a spokesperson for them though - great group! (organicathlete.org)
Jonas said you and chr can get your names across boobs as long as he gets the ass. Keep in mind that since my boobs are pretty small, we'll have to go with gcd and chr. haha.

Only if I can have the left boob, so I can be closer to your heart. Awwww.

Since I am old and tired, I better have my name put on your ankle just above that elegant and risque' sock line. I would imagine that is where the corporate sponsors really get their product visibility, even if it is a whirling blur.
rickie

RR Should watch "Double Indemnity" and then re-think very carefully whether he'd want his name on the ankle of someone like Peanut. Mr. Rainwater, there's a speed limit in this town.
-- E.C. Chamberlain

Did someone mention boobs???

hey gc
you got the left boob,
rickie
I can give you the ankle but do note that i have broken it in the past. Hopefully it wont happen again but if it does dont take it personally if your name is split in half.
chr
boobs, boobs, boobs

So you're racing for team Unattached next year?? Thats a cool name, what do they make?? :)

and what part do you want, jen? haha