Could I Have Seen This Cyclo-Cross Ad in USA? 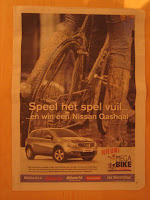 I bet we may start seeing them soon based on the rapid growth of cyclo-cross throughout America. As I sit here waiting for the bulk of my season to start, I pass time by reading up on USA happenings.

When I first started to race cyclo-cross back in 1999 with Lyle Fulkerson's infamous Super Cup Series, there were about 30-40 female racers per event (if i recall correctly). The biggest event of his I ever attended must have been National Championships in San Francisco, which contained more women than i was used to. Maybe there were 50 women. (Here is the LINK for Outside Mag coverage of the event.) It is now close to 100 for Nationals - in Kansas Friggin' City nonetheless! Impressive.

What makes the number of participants even more spectacular is that due to the new USA Cycling and UCI rules, the fields should have shrunk after mountain bikes were made illegal and every racer was now required to have a UCI international license (at $150 per year) and be a card-carrying elite-category rider.

The quality of the field today, while equally impressive at the top end, has twice the depth of amazing riders. Just as before, some found their way to cyclo-cross through off-training for road or mtb, but now it seems there are women who are beginning their career as cyclo-cross rider swhile using the other cycling disciplines strictly for training. Just like in Europe. I expect we will see more days like 2007 World Championships when we won three silvers. Although I did not medal, I was proud to be a part of the team. There was a very special feeling at our team house - almost magical.

Now all we need is more financial support from USA Cycling. If they could somehow create a little more budget for cross racers who have designs and talent for competing at the top level - NO MATTER their age or gender - it will easily have a direct effect on the success of Americans in the international level. In turn, the raised competition level of these folks will trickle down at the USA races to the rest of the field, raising the level throughout the country.

I may sound critical of USA Cycling but I am actually rather hopeful. Over the years, they have increased their support for racers - at least with World Championship competition. My first time at World Championships, I think I had to pay $2500 for a week of support (ticket to Europe not included.) Next time I had to pay only $1500 upfront (ticket to europe not included) but got a refund for portions unused (I was already in europe and didnt need certain services.) The third time I had to pay $500 up front (again, flight not included) but since i already lived in Belgium, i showed up a couple of days before Worlds to get a refund of 100 bucks or so.

The beginner women's field at the first Cross Crusade race of the season had 75 racers. Total number of racers 1267.

That is crazy! Wow! We have come a long way from Velo Bella's Dirty Dozen which was one of the first supporters of beginner women in cross racing. Thanks VB!

I am going to look on the map and try to find "Kansas friggen City." Ha! Done with the factory marathon, and I got out this morning and it was very cold. It will help me figure out how to dress, but not over dress. I'm thinking my "friggen wind breaker." I only went 3 miles, down the hill, and then up the hill fairly fast and anarobic. I feel so crappy and bloated, or "friggen bloated." I am concentrating on complex carbohydrates, and hydration, and laundry, and I think I will just rest. Hopefully I can shake this sluggish old fat guy feeling.
Cyclocross must eat bikes. Warmest regards from "Fayetteville friggen Arkansas."
rickie

Cyclocross does eat bikes pretty friggin' quick. And sometimes riding them does make even me feel like a friggin' sluggish old fat guy.

Maybe someday, I will feel like a young, attractive, american girl that lives in Belgium and is frikin fast on bike.....
rickie

Your "frikin" brought up a good point. Maybe i should change my friggins to freakin' or frikin so as not to confuse the sentiment with something not suited for my PG-rated public blog.

PG!!!! Oh my goodness, I always thought this was a G rated blog. Some say tomato, some say potato... however the f%$&^*4j song goes, I mean friggin song.

Have a super day and say hi to Coe Coe and Chocolate from Nemo.
rickie

It's similar in Canada - funny you should bring up this topic as the Canadian Cycling Association just sent out the requirements for Canada's World Cup racers today:

Not only are our cyclists entirely self-funded (and expected to be so) "they may be asked to contribute to the costs of support staff".

Wow. So not only have you got to pay for yourself, you're expected to pay for other non-racers!! For shits'n'giggles, let's have it so we pay for our competition to be there too!!

It appears that Canada has nearly 20 spots open, but i'm pretty sure we'll see hardly any of these spots filled. =(

Cyclcross growing? Ha... you should come to the UK to race. 70 races TOTAL - all classes from pro's through the cats to novices like me. Girls, 3 to 4 if you are lucky.

Strangely Cycling Weekly asked this week, "Could the UK put an event on like Cross Vegas?"

Too Freakin' sure we could, if only someone would put there bottom on the line and PROMOTE it!

That was supposed to say "70 racers total"

I have read about some of the races there in the UK since my friend gabby day (gabbyday.com) lives there. They may be small but they seem like great warmup races for her for when she comes over to belgium to do world cups. Cross Vegas requires a high spectacle level. do you really think the subdued brits are up for the challenge? Or am i just stereotyping based on the british comedies i've seen...

This is interesting. This is from velo news.
http://www.velonews.com/article/84141/big--cross-weekend-in-gloucester-cincinnati

I enjoyed miss Day's website. Cross looks really cool, and I am certain I would die from it, with my face in the mud.

Yeah the courses can be quite challenging but the field less so for someone of Gabby's level. It makes us laugh when some ofteh British Trade teams line up with us mortals, i.e Evans, Rapha... they are crazy fast! Nat champs aren't a too rare sight lining up with us on a Sunday! Which is as cool as it is disheartening.

Thanks for the link Rickie, sounds like GG's campaigning is finally gettig somewhere (well in cross at least).

"I would die from it, with my face in the mud" love it!