How Much is Sven Nys Really Worth

According to Hans van Kasteren, organizer of today's race Zonhoven 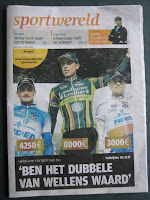 Title of newspaper to the left says "It's double wellens' value"

When asked how he can request such a high start money, Nys confirms what anyone who has seen him live knows as truth - he brings in the spectators by the bus-load. Considering a race entry fee usually varies from 8€ to 15€, and that he attracts more than 1000 Sven-Nys-specific
fans, it seems like a fair price.
This season, Nys plans to do about ten fewer races which means ten fewer times to see him so theoretically his fans will make every effort to attend ALL his events. That alone should increase his per-event spectatorship. And when you combine that with Nys' stated intention to give his best at every race he attends, you can be assured that additional folks will pay the price to see it. 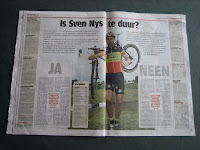 Title of newspaper reads, "Is Sven Nys too expensive?"

This topic has been hot since the beginning of the cross season with Ben Berden one of the first to speak up about the high start monies asked by the top guys. With the start money increasing every year disproportionately faster than the increasing number of spectators, the money has to come from somewhere. That somewhere is the proverbial pocket of the lesser known cyclists like Berden and the many others who rely on start money to cover costs for their season.

Is it not fair to pay the top guys what they are worth? Should we put a cap on their start money? How do you fairly judge what a person is worth?

What may just happen is you'll have maybe 12-18 top racers per race - a very small field. Or maybe the organizers will open up the events to anyone so that it is a full field at the start line while the rest of the race may play out like a circus as most of the field will be lapped five times per race. If there is no longer money to spare for the decent racers outside of the top 15, it may just kill the sport.

Good thing women race for the pleasure, not for the money - as if there were an option.
Posted by PEANUT at 4:48 PM

A million dollar question, in every sport/walk of life. What is somthing worth??? What people are willing to pay?/a portion of a true market value? or a fixed figure based upon actual cost?...

Why do I earn more or less than some of my contemporaries?

I guess in this instance it's down to the bargaining power of each of the riders' agents, and what each of their riders may bring to the table in terms of exposure and revenue.

In that case Nys is probably 'worth' more. Who's to say that the next race organiser's priorities are the same?

However a Nys/Wellens/Boom threeway is what people want to see. And if Nys won't race but for E1500 more does it become worthwhile to pay it???

I guess in this case not. Whether it is for team politics or just as it is 'too much'.

I don't understand the concept of start money, why not race exclusively for a prize fund, these guys have to make a living and will race to win/earn, this would get rid of any 'pecking order' related arguments and payout solely on the riders ability on the day.

It won't be long before 'cross is in the realms of the NFL and the Premiership!

On the Women's racing... No-one really understands why the Women get such a bum deal, other than due to less exposure (TV/advertising, not flesh, although there's a thought, I'd certainly watch more... :) ) but considering the use of 'fit' (physical and coloquial) women in advertising this makes no real sense.(And, I don't mean this in a condescending way) 30-40 lovely women in skin tight lycra busting their asses on a fast XC course, it's gotta be heaven for the sports channels??? Let alone better viewing than the latest drug scandal to break in the men's peloton/some grossly overpaid oik strutting his primadonna trantrum on the football field???

But then again Beach Volleyball is still relegated to the minor channels in the wee hours of the morning...

hey chr
Thanks for the post. I guess nys is like petrol - the price may go up but that doesnt mean everyone can still afford to have him. haha.
Many years ago, when cippolini's sponsors quesioned his request for a raise, an independent company studied his worth. It turned out he was worth way more than the sponsor could ever be able to afford. Maybe someone will take up the challenge in assigning a monetary value to Nys. I bet there would be many surprised faces.
I know of a pro mens team that recently dumped much funds into taking their program to the next level. Unfortunately they didnt get how "value" or even "perceived value" works (when they are not the same) and they are putting all their racers in events that are not televised. A win may still be a win if nobody sees it, but if nobody sees it, what it its value?

Great analagy...
to continue it, I guess even though petrol is going up an up anup in price we still go to the pumps.

Oh yeah, maybe you and I should start up our own TV channel, I think our programming ideas would go down a storm!

I always prefer women for pleasure. Wait. What were we talking about? My bad.

Oh, and I won a race. Do off-road duathlons count?

Well, if you see what some of the top road riders ask (prices of over 20000€ for TDF winners and World Champs.. I believe what Nys is asking (and getting) is not too exaggerated.

I wonder what the road racers' asking prices are for the post-tour crits? They dont even ask entry fees for them (maybe some do) so i wonder how they come up with the big bucks to afford these racers.

about post tour crits.. when Rasmussen was expelled from the Tour he counted his losses at 25000€ a race.

damn, 25000 is a lot! i did talk about lars boom's increased asking price in the paragraph below the start money list.
On another note, did you know it is supposed to be 20°C and sunny saturday?