Last Friday night was a late one - till 5am to be exact. It was Jonas' mom's 60th birthday 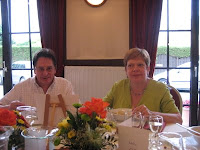 The party started with champagne hour in the backyard of the party hall. We were given a 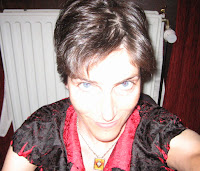 choice of champagne, kir royale or some spiked orange juice which they aggressively refilled for a full 1 1/2 hours. The average partygoer probably had about 6-8 glasses before staggering indoors for the formal 5-course sitdown meal. The next hour or so was a bit fuzzy for me - and i only had 2 glasses of champagne! I still dont know how the Belgians drink that much and act completely sober. Maybe after my cycling career, i will investigate!

Jonas' mom, Godelieve, was kind enough to have the caterers make a full vegan meal for us. Of 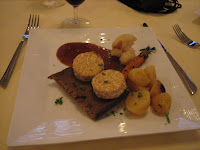 all the courses i was most impressed with the main one. They gave us a vegan meal with the same layout as the meat counterpart but replaced the raw beef with tempeh circles on a flat piece of tough seitan. I didnt even know those products existed in Belgium.

And of all the entertaining events of the evening, I enjoyed most the dancing. Watching 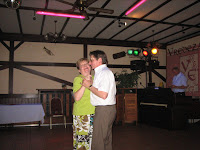 Godelieve dance with her husband Juul of 40 years was priceless - especially when he grabbed a quick butt squeeze when he thought nobody was looking. Early in the evening, the DJ played a string of old belgian folk songs. I can only assume that these songs were dated since the older generations took center stage to line-dance. 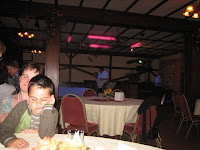 Later on, the party on the dance floor morphed into full chaos to include chubby checker and saturday night fever moves. Oh wait, that was me. The rest were doing versions of everything from Elvis Presley to hopscotch. As an avid 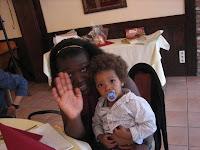 peoplewatcher, i was deleriously enthralled. One of the animated dancers was Mahina, Jonas' cousin's (Phillipe) wife. She just returned from the hospital that afternoon after having a baby and still had the energy to move her booty. Incredible.
Although the party went on until 5am, the truth is that I didnt last that long. I only made it to 2am. I was out-partied by Godelieve's friends and family - all a generation older than I!
Posted by PEANUT at 7:59 PM

Sounds very familiar! That cake was so delicious - thanks for sharing.

Great photo of you and your blue eyes. One for the archives. Say hi to that good man of yours.
Rickie