Back home again...for the moment 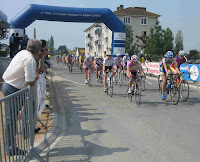 Sorry it took so long to update the blog. I just returned from France yesterday after an almost three week stint there. It was yet another humbling time there since i don't know french yet. Even though i am getting better at understanding it, it is still slow going to learn how to pronounce the words and string them together to form sentences.

When i am with the gals of the team, I use what i call block talk. I put nouns and verbs together to get my point across - not pretty, but it 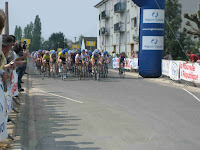 works. And in the races, i now know enough french to communicate with my teammates to make sure i can be an active part of the team effort. Luckily my team managers (nicolas and cathy) understand english so they are spared my version of french communication.

But even though i can now do small talk, I still miss out on the fun stories that are told at mealtime. I will continue to try and learn french as quickly as possible, if for no other reason than to understand Melodie's tall tales. Every time she tells a story, the other gals are overwhelmingly amused! I look 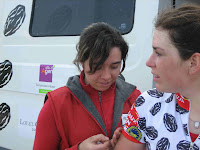 forward to being affected by them too!

Saturday's race went a bit better than last weekend. I finished with the lead group. Thanks to all of you who helped me to keep the faith. I guess in hindsight it was only my third race completed this season so i shouldn't have been so hard on myself. I am mostly thrilled by the sensations i had. I am finally feeling like a bike racer again. I can easily tell that i am not up to form yet, but that I am close. A few more races and i will be at my normal level again. 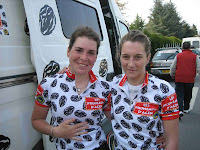 Sunday's race was good and bad. Good because again my sensations were better. All the climbs felt easy, the pace felt fine (it may also be partly because i opted for the much lighter wheelset for this race as opposed to the ones i used on saturday which were .7kg heavier.) But with 20k to go, on the finishing circuits, I had a five minute shutdown. For five minutes, the body just didn't want to go. I willed it forward but only for four of the five minutes. The last one minute my mind just couldn't fight the body any longer and i got dropped from the lead group. But once the minute was over, i got back on the job and time trialed for 15km, losing only about three minutes or so to the ch 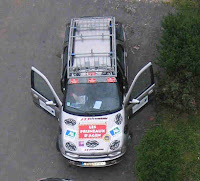 Now that i have had time to think about what happened, i think i was just tired from saturday's race. Since i am normally better on the second day of racing, it is perfectly clear to me that even though i am improving with every race, i am not yet there. A few more races and i should be back to normal level again - playing and having fun on the bike!!

As for my teammates, they rode their hearts out!! In saturday's race, angelique and marianne finished in the front group and in sunday's race, celine, angelique and marianne finished in the front group. Celine had a mechanical saturday. Melodie and Aurelie put in fine performances as well - toughing it out to finish strong. Aurore is still seriously injured from the Cholet race (same one that took me out!) so she worked through as much pain as possible both races until finally pulling out to save herself for upcoming events. Although Tiina was racing in her club colors, she too finished in the front group both days. And Christel placed 7th in the first French Cup MTB race saturday and got caught behind a crash on sunday, splitting her from the lead group just towards the end of the race.

Gotta stretch and do my abs now! Thanks for reading.

P.S. As of now, i am not sure where i will race this weekend but i will keep you posted!
Posted by PEANUT at 4:46 PM

No doubt you are checking b-pressure. Man, I STILL can't get over the team jerseys. PRUNES! Gotta love it, people!

Hey paul:
Yeah, prunes. I do love them - thankfully! Glad you like the jersey design - we are easily seen in a field of drab kits. What is b-pressure?
Thanks.

Man, if I knew then what I know about all the high-tech stuff flowing through the veins of some of these guys in the peleton, I would have tried them ALL, without apologies.

Would it have been worth it? Hell, yeaaaaaaaaaah. Can't go wrong with 7 TdF's, if you know how to keep it on the hush-hush.

After several years of NOT getting where I needed to be, like on the podium, on a regular basis, with nothing more exotic than massive dose of caffeine, as much as possible, just a few milligrams under the limit, I decided to live out the rest of my career through hot shots like you, trapeizing all over the French countryside like a whole lotta PRUNES on meth.

I'm sorry for this sad commentary on the world's GREATEST sport. There's probably more than enough heartache to go around for everyone, especially for those of us too stupid to figure it out the FIRST time, and left looking up at the podium from ground level. No hard feeling here actually. At least, my balls don't have cancer.

So glad your races went well over the weekend! Your time to shine is just around the corner!