Pictures are worth a thousand words... 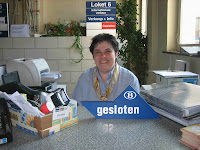 ese photos should then cover me for 8k.
My weekend to Pelussin, France (near St. Etienne - below Lyon):

I just got back from a little mountain town called Pelussin, located near St. Etienne, in the middle of France. What a beautiful region! I am quickly understanding why France is a destination hotspot for so many people! I left saturday for the ten-hour journey and returned sunday after the race, arriving in Belgium monday very early morning.

I was picked up at the station by Sabrina, massage queen and master organizer of the team. Every time we see each other, she works on my french while I work on her english - very 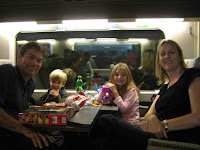 symbiotic. It's especially effective because we clown around a lot, removing all stresses of learning a new language.

Once we were settled in the car, we talked about what we've done for the past four days since our last get-together. Then we talked about our travel to get to the race. She had already driven for 6 hours in hot humid weather with NO air conditioning when she collected me which explained why she looked as if she just stepped out of a sauna. Next I talked about my 9 hours of multiple trains, taxis, and buses and the people I met that day - a South African family and a French guy.

After telling Sabrina that i talked with the french guy, Christophe, for a couple of hours, she asked me if it was all in french? So of course the two of us laughed maniacally, turning the car even more into a mobile oven. Ten minutes into our gut-busting marathon, I took a break long enough to inform her that her question wasn't funny, which got us rolling for yet another ten minutes! If her car wasn't so low to the ground making the inside viewable to every passerby, i would have stripped down to my skivvies in a rather futile attempt to escape the sweltering heat.

We drove for an hour through the countryside, up and over mountain passes until finally arriving in Pelussin. I now have four favorite mountain cities - Pelussin, St. martigny (suiss), Gap, France and of course Mill Valley, California. 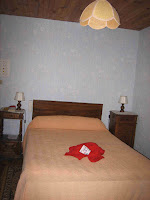 We were served a typical french five course meal, with various slabs of meat and cheese in every course, finishing off the meal with a cheese custard and crepes filled with homemade blueberry jam. Once it was obvious that there was absolutely nothing for me to eat, our DS Nicolas helped me out by asking our host to make some salad, veggies and vegan pasta for me. For dessert, she served me bread, fruit with that delicious jam. Yum!

After trying to sleep at altitude on a bed so soft that my body folded on itself, causing my boobs to smooch with my thighs all night, I "awoke" to a sunshine-filled sky! It was race day - yippee! Although I was happy about it, my shifting and my legs were not. At the end of lap 2 of 5, of course at a critical moment when the pressure on the pedals was high, the chain decided to dance around the sprockets waiting for the music to stop so it could pick one and settle down - a bike's version of of the 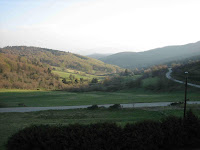 childhood game of "musicial chairs". No such luck. And when i finally got one going, a few seconds later it would jump up again as if the music started to play again.

From the jerking of the chain, i pulled a muscle in my left quad causing it to cramp up. The team car pulled up to me in the middle of the debacle and tried to help me with the gears. Nope - a no-go. So i rode in no-mans-land, time-trialling until the group behind caught up. Since there was no way i could catch the group in front, I finished the race anyway to get a good workout in to prepare for upcoming races AND to give the people who were cheering for "pruneaux" someone to cheer for in my group. Even though i may not have won the race or have come even close, i did appreciate those frequent "pruneaux" cheers I received for the rest of the race! 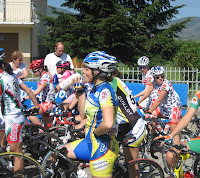 than I. Christel placed 6th and tiina 11th in the sprint finish, while Angelique came in just behind. Christel and Angelique were on strict orders to ride easy to save themselves for Fleche Wallonne World Cup tomorrow. BONNE FLECHE Christel et Angelique, allez fort!!!

Top photo is of Christine, who works in the Belgian Railways. I have visited so often over the last couple of months that we are now buddies. She asks about my last travels and I ask about her visits with friends and upcoming holidays 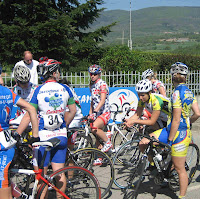 in Belgium. I just recently learned a bit about the differences between afrikaans and dutch from friends visiting from South Africa, so it was fun to sit next to this family and hear their take on it. Just as i suspected, they spoke exclusively in english while in Belgium. They said the languages are too different to communicate effectively. Based on the confused expression on the waiter's face when my South African friends tried to order their drinks in afrikaans a few days ago, I would have to agree with this family.

Apparently in south africa, the kids are taught three languages in school - english, afrikaans, and regional dialect. The kids in the photo are attending a school taught in english, so they are just now starting to learn afrikaans. I suppose shortly thereafter they will begin lessons in dialect.

AND on the same train I met a French guy who spoke perfect english! He enlightened me a bit abo 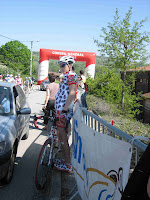 ut french culture, history, language, etc. It was enjoyable to hear it from an actual French person's point of view considering most of what i hear comes from outsiders from Belgium or USA. If you look closely at the South African family photo, you will see two people in the reflection of the window behind them - me and Christophe - the french guy.

Tangent alert: When i was at hottie Sandrine's parents house, I met her nephews. The seven year old was so excited to hear I spoke english that he wanted to join right in. He started with hello and goodbye, quickly working his way up to numbers. Here was his rendition of 1-10: 1,2,3,4,5,6,13,8,9,10. Sooooo cute!!!!!!! Good thing he is a native french (from France) speaker because their numbering system is much more difficult! Oh, and i also just learned that belgian-french speakers and france-french speakers have different methods for counting. In france, 1-16 is straightforward. But once you hit 17, it starts to get funky. Seventeen is "ten-seven", 18 is "ten-eight", 19 is "ten-nine". Then it goes back to being normal for a while until you hit 70 "sixty-ten", 80 "four-twenty", 90 "four-twenty-ten (quatre-vingt-dix)". That sure is a mouthful just to say ninety. Very strange indeed. I guess if you think about Latin language it's not so strange - but then again, latin is no longer a spoken language except for the odd Oxford parties and satanic cults. 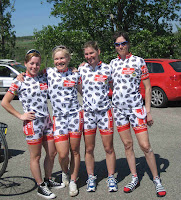 The third photo is of my bedroom in Pelussin. The hotel was almost 1500 meters up in the mountains with gorgeous views (fourth photo is the view from my bedroom.) The building was old and rustic but very charming, sort of like the woman who ran it. And just like the building, i suppose, she too had a history. She was a former beer connoisseur, traveling the world and winning competitions! Even though I had no idea what a woman beer connoisseur would look like, I never imagined it would come in the form of this little old lady. Very cool.

Next couple of photos are of the gals waiting for the start. We waited in the scorching sun for about 1/2 hour before the race got underway. One of the photos is of me hiding in the shade dancing to the "so many men, so little time" tune by, i think, diana ross or the pointer sisters? that they played over the loudspeaker.

Bottom photo is of our team post-race sporting our "nice weather" bibs. As you notice, no pamper effect when we wear the all-white ones!
Posted by PEANUT at 10:41 PM

the hilly picture reminds me of the east bay foothills. amesome stuff.

Yes, east bay foothills in the winter (because they turn brown in the summer) plus 1000 meters of land below where you can't see in the photo. There is some really good riding in the East bay! Oh, and there were a billion mtb trails all throughout the french mountains. I wish i could have stayed there an extra day to take my skinny wheels on an exploration!

"After trying to sleep at altitude on a bed so soft that my boobs made love to my thighs all night,"

i'm trying to sort that out and not having much luck with it...

Hell i hate to see what happens to CV in a race when her bikes actually shift properly...

let me clarify the shifting - the team put the fancy new carbon diva Ycone wheels on the bike that morning so the shifting was a little off. The bike should be fine for future races. Nice wheels, though!!

Hi Christine - great to see a pic of the our family on your blog. Enjoyed chatting to you - be sure to contact us if you visit South Africa. We wish you and your team all the best for the future. Regards - Stan, Heather, Melissa and Matthew Bezuidenhout. (eMail : stanb@webmail.co.za)

Yes, EC. Roeselare is the home of the first belgian to win the Tour de France back in 1912. We should put you on Jeapordy.