A while ago each racer was given a stack of team trading cards (see photos) to distribute to fans, press, media, etc. (Individual cards are said to be in the works!)

Like a good little racer, I dispensed them all. Of the numerous french races i attended, I handed out one (to a press guy.) And the rest were given out at one single Belgian event (Roeselare UCI Road Race.)

It's amazing how many people collect cards in Belgium. Everyone from press/media to old ladies and little kids were asking me for a card. In fact these cards are so highly sought after that i even had guys 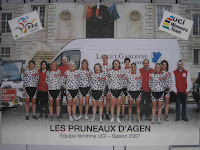 approaching me after hearing a rumor that I had new cards - they wanted in! And to confirm the rumor, they'd describe my two previous cards to ensure that this card, yet unseen, is indeed different. After i ran out of cards, the requests continued - but in the form of self-addressed stamped envelopes. Fans/press/media handed me these envelopes in hopes that i fill them with trading cards.

Water bottles are serious collector business as well. At the same Belgian race, I gave away two water bottles (signed, of course) to collectors - 1 kid and 1 adult. The kid showed me his bottle collecting photo booklet - he had thousands!!!

Similar to many blue collar jobs, pro female bike racers get very little glory, respect, money, and recognition for all our hard work and sacrifices. BUT the fans more than make up for it!!! I am both honored and humbled every time I'm asked for a trading card, or for my autograph. Heck, I'm simply moved by the fans' presence at our events!! When people are lining the roads to clap and cheer, it's easy to feel like what we do is glamorous!

THANKS to all you fans out there!!!! We so appreciate it - more than you know!
Posted by PEANUT at 10:59 PM

Me, I just want to take your picture.. so beware :)
I hear what you are saying about the womens' pro circuit though.
Honor where honor is due.. please take a bow from me.

Hey wolfie:
I thought that was you jumping on the trampoline while holding a zoom lens camera in my backyard a few minutes ago! I hope the camera survived the rain.