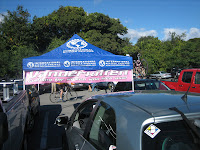 What a rude awakening...starting with the 3am wakeup last wednesday - only after 1.5 hrs What a rudeof sleep - so i could catch the 6am flight. Every time people bitch about trans-american jetlag I'm always the first person to call them on their BS. Well, my name is Peanut and I suffer from jetlag.

It was really obvious to me Geoff when i just couldn't normalize until noon each day. Maybe i 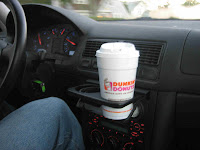 should have had a dunkin donuts coffee like geoff did. Instead i opted for the fresh organic french pressed coffee that made at home for us. I still don't get why he'd get a dunkin donuts crap coffee after making three full LARGE thermoses full of thick rich tasty coffee.

On saturday, we got up at 6am for 7am departure so Geoff would make it to his race on time. I slept in the car the whole way there and continued to sleep straight through the start of his race! (by the way, geoff kicked ass for the first part of his race, holding solidly in 3rd to 5th place for a while until he crashed. His crash was so spectacular that he even got some airtime from the announcers! He went on to finish strong, passing a bunch of people who went by him while he was down.) 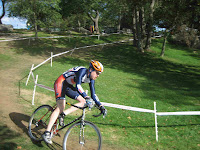 Upon awakening at 10:08, I quickly realized he was out there on the course so i flew out the car, camera in hand to get photo proof of his suffering. Just as i set up shop on a section of the course next to a group of kids, they started screaming "go dad." Wow, I surely wasn't awake enough to handle that high-pitched symphony so i changed locations and stood next to an 80 year old woman figuring she'd be quiet enough. Well, within five seconds, she whipped a cowbell out of her oversized wool coat and went wild. Third try was just past the start/finish line where the only guy in sight was a course marshall. Again, struck out - he started clapping for the guys as they rode through, but it wasn't any ordinary clap. He cupped his hands in such a way that the sound pierced my ears, seeming to get louder and louder with every smack. Back to the car.

The weekend of races were quite a shock. Every year, when i take a little time off between road and cross season, I forget just how painful racepace can be. If i wasn't awake from the cowbells, screaming kids and clap-from-hell, the virtual punch in the face i got when the whistle rang for Saturday's race surely did the job!

The race started off with my being the first called up to the line since i am currently 2nd highest USA woman on UCI international rankings. But it went downhill from there...for the first four seconds, I was in second position behind Lyne Bessette, canadian national champ and superhuman cyclist. But by the fifth second, I successfully pedaled backwards to about 20th position. My body just didn't want to go forward. I know this is what happens when you are racing your first event of the season against a bunch of gals who have already raced a handful of events, but nonetheless it is still humbling. Anyway, i spent the rest of the race chasing back to the front of

the field, only managing 7th position. Lyne finished one minute ahead of 2nd place and i finished 30 seconds behind 2nd (2nd through 6th place gals worked well together on the roadie course to fend off the chasers.)

Sunday's race was even more of a shock. When your mind and body go through something as dramatic as a first race of the season, it has a bit of trouble recovering so i definitely felt a bit of fatigue during the next race. Again, within five seconds I aptly managed to pedal backwards to 20th position but this time only managed to work up to 10th (would have gotten 8th but lost 2 spots on the last lap - just didn't have it.)

Although i didn't win the races or come even close, I'm glad to have done them. Gloucester is one of the most picturesque courses in the world and is run so well that it is an honor just to be there! I also got to run into quite a few people whom i have not seen in a long time. My focus is really on the World Cup Circuit and National Championships so those races are behind me and I'm now getting ready for this weekend's World Cup Season opener in Kalmthout, Belgium. I leave here in Providence, RI tomorrow to arrive in Brussels Wednesday. 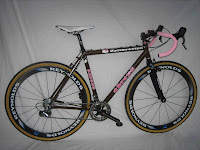 AND most of all, i was super thrilled to be there representing my new team, VANDERKITTEN!! I was easily the BEST DRESSED of ALL the racer! My Ahrens bike was a big hit too! I had swarms of folks stand around my bike lusting after it!! The funniest of all was this one 4 year-old kid who rode by on his tiny bike while staring at my pink kitten bike. He stared so hard that his bike came to a full stop when he smashed into a car parked next to our tent!

OK, gotta go. The sun is going down 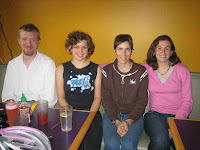 and my lighting system is not very good. More later. The next time i can update is on wednesday.

And if you want to check out more photos of me suffering, my friend Andrew whom i'd known for about 20 years took a bunch:By the way, here are photos of:
the Coffee Depot in Warren, RI where I am connecting to the internet;
photo of the four of us at lunch - geoff, hannah, me and giulia;
photo of hannah's track/commuter bike 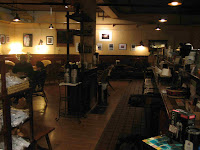 THANKS for reading and THANKS for all your support, emails, calls, positive thoughts, etc.
Posted by PEANUT at 11:51 PM

Wow, 7th and 10th placings are nice way to start out your long season, good job!!

I miss watching you ride...in the meantime, I have the little movie clip to play.

Woohoo! The bike and kit look awesome, i think you've got the look down - isn't that like 90% of 'cross racing? hehehe

We've got the same Specialized full-fingered gloves! I love how the red appears when you bend your fingers..i do that during the race and automatically make it up 2 spots. People just get out of my way, it's pretty cool. Safe travels!

Nice to meet you Christine.

Good luck in that World Cup! See you in December in Benelux.

It always looks kinda strange to me to see people in short sleeves next to cyclocross courses.
Over here cyclocross is synonym with cold, freeze, sleet and various other kinds of sufferings. Oh, and live TV broadcasts of the mens' Elite races.
I hear our World ChampVandervecken was over in the States for a few races?

THanks for comments guys - and gals! I'm typing from logan airport (boston) on my way to brussels. Yes, ctodd, i'd love a copy of that video. As long as it's not a video of my getting mowed over by a girl. That part isn't nearly as embarrassing as my "that wasn't nice" comment. ...must learn how to be scarier during races.

C - Great job, two Top 10 finishes in your first races of the season. Sounds like you had a very strong field to contend with as well. I'm looking forward to hearing about 'cross in Belgium. Good luck!

Christine, it was great to see you. Your kindness and encouragement means a lot to me. Keep racing strong! <3