After a very hectic weekend, I am just now catching up on my things-to-do list that includes some 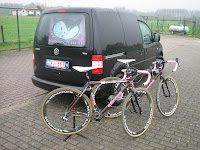 couch time. As i type this, i am watching a german cooking show. Although the food doesn't look too appealing, it's fun to watch them get riled up about their personal cooking preferences. OK, they just got back my attention on the food. They made a fudge brownie squared layered on top of each other with cream layers. I can easily make a tasty vegan version! But maybe i'll wait until after Koppenbergcross this Thursday since i must stay fairly skinny for the repeated climbing up the koppenberg.

OK, back to racing! After a warmup on the Belgian National Team (U-23/Jrs) course through 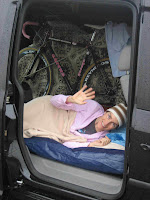 the nearby Kortenberg woods, Jonas and I took off for an 8-hour drive to Switzerland in a borrowed van. Jonas' friend, David Van Ermen, lent us the van for the long haul since the official Team Vanderkitten van is still being constructed at the factory. David sells pre-owned cars in Zaventem near Brussels Airport but lent us his own personal van! It was much better than an official car rental; it had less than 4,000 km, didn't smell like skank and we pretty much knew where it had been (bike trips) before we hopped in! It was so huge it fit everything i needed, including a mattress 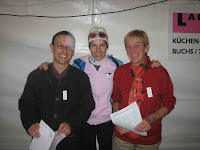 We arrived in Steinmaur Saturday at 10pm and was greeted by our host housing family Trudi, her husband, three cats, and a much appreciated hot cup of tea (photo to right is of Trudi and her son Thomas working the prize table). I was thrilled that she keeps her house VERY WARM - a winter season bike racer's dream!

The next morning we headed 1km down the hill to collect the race number. As i was standing in line, a 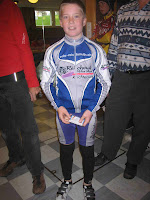 bunch of people were staring at us. I suppose people dressed head to toe in pink Vanderkittens speaking some random language - english/flemish combo can be a bizarre sight. But while all eyes were on us, I was fascinated by all the little boys! I still can't get enough of seeing young kids completely kitted out like the pros! The cute kid (in photo) who was standing behind us in line is a prime example of how well put together they are! He was all too excited to pose for the photo - love it! He's all ready to go pro, down to his innate ability to ham it up for the camera!

Standing at the start line reminded me of the first few foreign races I attended in Belgium. You recognize the formalities and rituals preceding the event but the details are a blur. Well, at 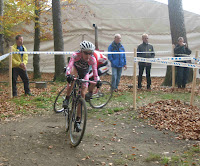 this event, the details i

missed were that even though the junior girls are getting a head start of what seemed like well over a minute, we were actually racing against them for prize money and the chance for a podium appearance! (I wonder how they decided the time gap that they'd award the juniors as a handicap.) Now i understand why the juniors I'd passed were desperately hanging onto my wheel - because we were actually racing against each other! haha! Now i feel foolish for allowing and even encouraging these gals to sit on my wheel as I'd pass them. (racing photos of me taken by radquer.ch.)

At the end of the race, there were quite a few fans who told me that they enjoyed cheering for me - too sweet! I, too, enjoyed hearing Vanderkitten and my name repeatedly pronounced in a German accent!

Oh, and I met a fellow American! Her name was Larsen - she races for Swiss Road team, Specialized Designs for Women. I thought that was really sweet of her to introduce herself! It's always fun to run into Americans when traveling outside the country. But when she first spoke, I would never have guessed she was from USA. So when she told me she was American, I jokingly responded that i could tell by her accent. Jonas laughed but she didn't find humor in it. Maybe she doesn't realize she completely lost her American accent.

Larsen reminded me of my former Prune teammate, Jennifer, who has also been living overseas (France) for the past ten years. Unlike Larsen, Jennifer lost all her english. She'd speak to me in what she thought was English but was rather French, just slow and loud. She was a great

teammate, charming in a very quirky way and very kind to everyone - especially me!

Although i offically placed 3rd UCI Elite at the event, i have noticed that I am listed as 5th overall on various internet sites since they included two juniors who got a head start on our field. It is surely a pity that the internet site results are misleading, and that I missed out on standing on the podium but I am very glad that the UCI got the results correct. Those UCI points will help me to get better start positions at future races. And the missed podium appearance makes me even more hungry to repeat last Sunday's performance as soon as possible! Maybe at Koppenbergcross...

Immediately following the race, we went back to our host housing 1km down the road for a hot 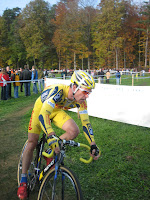 shower and a huge-ass bowl of walnut-pesto pasta with oven roasted broccoli and 10-grain bread. We had Cran-Lemon Twister ProBars with expresso for dessert.

Just as we returned to the course to watch the men, Jonathan Page rode by us. A moment later, as he passed a lapped rider on a pavement straightaway, the rider swerved into his rear wheel and crashed. Even though the lapped rider was clearly at fault, Jonathan did something that is very rare at the top level of racing, he slowed down to almost a full stop, waiting for the guy to get up to make sure he's OK. Luckily the rider was fine although his tubular rolled off the wheel. I'd say that is a small price to pay for making what could have been a detrimental error on the bike. 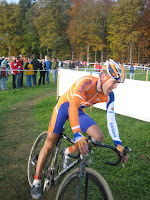 excitement wore off. For the first hour of the drive, we amused ourselves with speaking only in German. Considering we know about twenty words between us, we had to incorporate some english and flemish words but spoken with a German accent. Obviously he sounded much more authentic than I with my huge-ass American accent! Next we listened to the one CD we brought about five times. To extend its play time, I repeated one of the songs about twenty times straight. All words now memorized. I wonder what other people do to pass time on long drives. If you have any ideas for future trips, please let me know!! Maybe i'll bring more CD's.

Now all focus is on Koppenbergcross. What a spectacular event! The crowds are always thick and the atmosphere is incredibly festive. Last year, the racers all gave the crowd bonus entertainment by hitting the ground at least once during the race. During the womens event, the skies opened up and turned the course into a sloppy mess. By the mens race, the treacherous descent straight down the hill was practically unrideable. But when there's a number pinned on your back, it's amazing the feats you'll attempt. This year the course should be a bit more dry. But then again, it rained today and yesterday.

Thanks for reading.
Posted by PEANUT at 10:28 AM

OK.. this time without spelling errors..
Yip, I read it all this time. Thanks for the extra explanation v.a.v the Steinmaur "mixed women" race. Weird that they didn't mention that pre-race.
Hope they show a little coverage of the girls at the Koppenberg before the Mens' Elite event on Flemish TV next thursday..
Weather forecast looks to be good, although it rained quite heavily yesterday.

I'm sure they did mention it but it would have been in swiss-german.

thanks for the well written report...i almost feel like i'm over there living the dream! go peanut!

That was probably Larsen Staley. She's hot stuff. Has a rainbow jersey, too. Look her up.

You will find more if you look for "Larssyn" Staley (rolls eyes.. not to split any hairs but still)

Great Car games (better with a group)
At night - Play the headlight game. The first person to punch the ceiling in the car when you pass an oncoming car that has one headlight burnt out gets a point.
Motorcycles are -1 dim headlights
-1 one etc.
Daytime-The licence plate game. The first person to read a personalized plate or give the country, state, province of a plate from outside the area you are in i.e. Belgian plates out of Belgium gets 1 point. -1 if you are wrong.
Have fun!!

great game ideas! its different from bunch buggy. thqt gets painful after a while.