Yippee!! Even more exciting is that 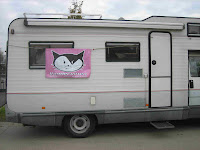 there are still 22 races left! Not all world cups, though! But in Belgium, ALL races feel like world cups; often times 30-50,000 spectators will show up for local events.

Jonas and I pulled up to the race site in the mobilehome and got the best parking spot in the joint. We parked just inside the entranceway on the main road, alongside the USA Cycling van. Immediately we displayed the Vanderkitten head on the mobilehome and hung the other banner up on the gate that spans the walkway from entrance to race site. We were the ONLY ONES to hang a banner on the long 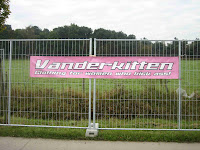 row of fencing so ALL EYES were on VDK!

Sure, it was great to be able to have a mobilehome to hang the kitten head on, but it was even nicer to have a home on wheels at the race site. What a luxury! I could sit with my legs up, sleep on the way there, pee freely, easily change clothes in a warm open area, sit down for a bite to eat, and shower immediately afterwards. The only other times i've traveled to races in a mobilehome were with a full team 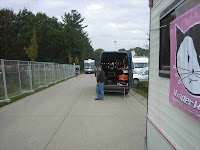 which is not quite the same; we usually claim one tiny area of a bench and keep in that little area for most of the ride. There's no lying down, no real free peeing since it was commonly requested that we save it for toilet stops. And when you have six gals trying to change into skinsuits simultaneously, the once seemingly large mobilehome seems smaller than a Mini.

Within the first ten minutes of stepping out of the mobilehome, we handed out at least 100 of my trading cards. I even had people bargaining with me to get more than one! But more amusing than the high demand of my trading card was the fans' interest in snagging one of the highly coveted Mike Ahrens trading cards!!! Within the same ten minutes i had gone through every single card i had of his. Some people wanted to know more about him while others "knew" exactly who he was. Two 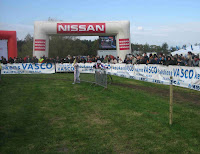 spectators even got into an argument about who he was - one guy said he was a cyclo-cross pro from Germany while the other was certain he was a mountain bike pro from America. The irony is that the photo on the card is not even of him but of a California racer Isaias Job! haha! Anyway, his cards are now tucked away in trading card albums scattered throughout Belgium.

The first race of the season is always like a big reunion. The last time we have all seen each other was back in January at World Championships since most of the racers and fans only come out 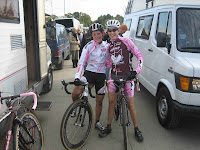 during cross season. If I had time and energy for a social life, i could see myself having a friendship with quite a few of these gals including Gabby Day (pictured with me at right), Suzanne Juranek (of Germany) and Suzie Godart (LUX national champ) and Lisbet deVocht who did her first and last cross race that day.

After a bit of meet-and-greet while avoiding the handshake at all costs to keep germ transfer to a minimum, I got on my training kit and hopped on the trainer. It was so cold that i wore every bit of Vanderkitten clothing, including the casual sweater! A bit later, liesbet swung by for some loops of the course. The lap was a lot of fun with berms, tight turns, stretches of pavement, the obligatory flyover, and stair runups, one of which delivered us just above a ditch that we'd have to ride into. The few times i didn't clip into my bike in time made the short downward trip quite the adventure!

All went well leading up to the start! Warmup was great! It was sooooo cool to have so many people cheering for me - even during warmup! I wonder if these people knew me from before or maybe it was the group of folks who grabbed a trading card earlier in the day. I even got a bunch of "Peanut" cheers. All those cheers help especially when i'm so far away from home.

At the start line, we were called up in country order. Katie Compton got 1st row callup since she is the #1 ranked USA woman. I got 2nd row callup at the 2nd ranked woman while Sarah Kerlin was 3rd callup. Two minutes after Serge collected our jackets, the gun sounded. My goal was to suffer for the first five minutes then settle into a rhythm. Easier said than done because within the first five seconds, a gal next to me couldn't clip into her pedals and swerved right into me, causing me to stop while everyone else passed. Then a few meters up, at the pavement u-turn leading into the non-passable bermed dirt section, I got pinned between two Italians and again had to stop short to avoid disaster.

A few moments later, while standing still at the base of the first 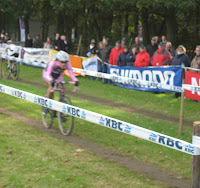 tight berm with the back of the pack, waiting for the chaos of collided bikes and bodies to clear, we watched the front of the race pass in the opposite direction at 40kph - clear trails ahead! But, no, i was not discouraged. Instead i put my head down and spent the rest of the race passing gals, jumping from group to group, to finally finish in 22nd place - about 3 minutes behind 1st place and 2 minutes behind 3rd place. Daphny Van den Brand won, Katie placed 2nd, and Sarah placed 29th.

My result may not seem like much but i am very proud of my ride. I rode against the very best women in the World. AND given that the course does not favor riders who start in the back of the field (fast course with very few spots for passing), I was very optimistic about my fitness. My sensations were good and I rode strong even through the last lap. This was very exciting for me, especially considering this was only my second weekend of racing and i just showed up to Belgium a few days prior. Yippidy-friggin-do-dah!

Here is the velonews coverage of the event.

Now all focus is on this weekend's race - I'm going to win it! I have collected all my positive thoughts from yesterday's World Cup, put it in an airtight container, and will whip it out at the start line this sunday. Anyone who wants to add to the container, just post a comment to this blog letting me know the thoughts you'd like me to add. All donations are tax-deductible.

On a completely different topic, I came across a mention of me on chicabike.com. I was their first UCI international Team rider to participate in their fantasy teams game. Their game is similar to the one that cyclingnews.com does but with the womens' pro teams. For anyone who follows womens racing, it can be a lot of fun to play! Of course my team consisted of me and a bunch of my friends.


Thanks for reading!
Posted by PEANUT at 6:49 PM

...i, like i'm sure a lot of folks, have great admiration for the fact that you've dedicated this time in your life to living yer cycling dream...in europe, in belgium & cross in particular...tuff stuff, baby...stay ON it...

Thanks BGW! You are too sweet!

Wow, that was almost as fast as a road race. I watched the mens' on national tv yesterday and the speeds were enormous..
Congrats on the result (22nd out of 35 or thereabouts) , do you favor the tougher circuits (more technical) or this kinda of formula one crosses??

great start to the euro season.....hope to see pink VK plaid on the podium this weekend!

Congrats on your good finish! Wishing you quick clipping in and lots of pedaling power for the next one. Been lurking for awhile and enjoying your blogging. I've been playing around on my first cx bike this fall and reading cx blogs for inspiration. Will keep checking back for the latest race reports!

Rocket Christine!!! Sunday's race will be yours!!! KITTEN POWER!!

You are so awesome!

The VK kit is the best. Ever.

Enjoy being back in Europe!

For the container, please throw in:

That's how I raced yesterday.

Great result for Katie Compton..
btw , the UCI still has you as a Pruneaux d'Agen girl..
http://www.uci.ch/UciDoc/CX/2007/CDM/KAL_WE.pdf

“pnut, pnut, pnut, pnut… Peanut!”
That’s the call I used to hear from the peanut man at Dodgers games, but I think it’s a pretty good Cyclocross battle cry as well.

Yippidy-friggin-do-dah, the container is just about full! Thanks so much! When the container is complete, I will wrap it up like a birthday gift to myself and unwrap it just as they do callups sunday. THanks for helping me to be more than prepared to do battle!

where do you race sunday?.

thanks greg! Since the kit really stands out, it's like always being on display - fun!

Thanks to all the "great kit" compliments, i'm so afraid to wash the clothes for fear that the washing-machine-monster will tear it all up! Let's see how long i can go without having to find out...

How did you score the RV?