three days of racing in a row. There was a low point, namely the second race due to operator

error, but other than that it was a great workout. More importantly I had a boatload of fun.


Friday's course in Geel (which means Yellow in dutch) was a simple 4-corner counterclockwise course of about 22 laps of 3-point-something kilometers per lap. We got lost on the way there, oddly enough thanks to TomTom, so without ample time to warm up before the race, the first few minutes were a bit painful. Lucky for me, teammie Liz Hatch was in the race; she covered just about every break - even instigating a few herself- for the first few laps until my body was ready to join my mental desire to show my face at the front. 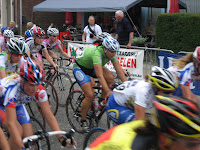 Once there, I took turns with Liz infiltrating breaks and jumping off the front to keep the race interesting. I think it was my first time this season actually instigating a real attack. Even if none of them led to anything as we finished in a group sprint, I felt really alive - and, in hindsight, right at home based on the encouraging words such as "A-friggin-llez" I found myself yelling to the others in the break. I've said this before but i just couldn't imagine any recreational drugs comparing to the high I get from racing. But then again I have not tried anything other than vicodin or morphine (for broken bones.) 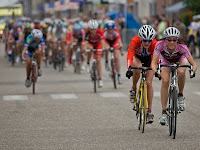 The highlight of the day was easily having my mom on the sidelines cheering me on. This was only the second time ever she saw me race. The first one was Cat's Hill Criterium in California - one of the few courses in California I miss.


Saturday's race was also 22 laps of flat riding but 10km longer and included a tricky s-turn. The pace started off fast (very partly due to my attacking efforts) allowing for few opportunities to eat or drink so i made the amateurish decision to subside on my pasta eaten three hours ago along with my Emergen-C drink I had for breakfast. 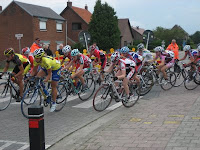 One hour into the 2+ hour ride I was dead. I continued on, trying to hide behind the biggest gal in an effort to nab some reprieve from the wind. It worked as i was able to stick it out until the sprint finish where I was spit out the back like a rotten pit.


The next day my modest plan was to eat and drink enough. As a precautionary measure Jonas taped signs on my handlebar and stem that read DRINK EAT. What i didn't realize until after the race was that I never look down at my handlebar in a race. Luckily Jonas' 18 post-saturday-race snide jokes (ie. I'd pour you a glass of your favorite wine with dinner but it seems you don't drink) stuck in my mind and i did manage to eat a few energy gels and drink a full 1 1/2 bottles of water during Sunday's race.

Sunday's course was contested on a more exciting loop with two whole highway-style overpasses, narrow roads and bad pavement. Julie, my travel companion for the day, was also thrilled for the change in course style to keep her awake. On two hours sleep and a party buzz that was still fading, Julie announced to me before the race that she was going to rely on me to entertain her since it's hard to fall asleep while laughing.

The race played out mostly like the previous two races - a flurry of attacks. Midway through the race Julie rode up alongside me. I turned to her and said, "Can't you see I'm busy?" It didn't make her laugh so i tried again, following up with, "Do these shorts make my ass look fat?" Based on her stoic expression I realized i failed her. Instead she opted for plan B - attack the field. It worked. It got laughs...from me though. What a way to stay awake. 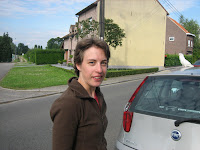 With three laps to go, she was caught so I went to the front to try and get myself in a small group so I could avoid the dreaded group sprint. After a couple failed efforts, we all rode in together for yet another sprint.

After the event, all the racers gathered around the registration office to return race numbers and collect prize money. Easier said than done. I overheard a teary-eyed gal telling someone that the finishline camera malfunctioned so her stellar result was not recorded. With that in mind, i collected my 5 euro deposit for the race numbers and skipped the possible 5-10 euro prize money for 30ish place to avoid any kind of she-said-she-said interaction.

The highlight of this race was easily the interaction i had with the other gals. The first few races of the season here in Belgium were a bit trying. It is as if the gals here put each newbie through a hazing ritual of sorts. They will yell at you, push you out of the way, and try to get you to do work for them. It subsides only when they either get to know you or you've proven yourself somehow. Sunday's race was a turning point for me. Girls will now move out of the way for me if they see that i'm trying to move over, they'll include me in small talk, invite me in breaks, and even stick up for me if someone else is snapping at me. As fifth-grade as it sounds, it feels good to be accepted. Speaking of fifth grade, after the race when Julie asked me why i didn't join her for her one-woman-show off the front, i told her that my ass got stuck between two girls so i couldn't move forward. Still no laughs.

Thanks for reading.
Posted by PEANUT at 12:35 AM

Lol, Geel is "Yellow" in English.. I think, not the other way around?!?
Try to watch the tour 2008 program on VRT 1 tomorrow , there are two cycling girls invited. Would be interesting to have a link to the results of all those races. Must check Adeline's site for that.

& definitely glad ya had fun...

Sounds like the form as well as the acceptance is coming. Brilliant! I'll bet showing up with a 'team' helped!

Awesome that Liz was able to help, then for you to atack the field too... a few races back would you have entertained that? It must be the 'Mum' factor? Or that you are just a fantastic gutsy bike racer? Or both?

Love Jonas' sense of humour, maybe he should try to make Julie laugh!

Love the pics, especially the one of you on the front getting your wheel sucked by Norway, and Liz on the front in the top picture!

PS Edited for overexuberent use of the exclamation mark.

chr: My usual style of road racing has always been to be active and attack or be off the front as much as possible.
it is super cool that i can now have the guts to start doing that again compared to even a couple of weeks ago. I am so thankful for that.
Last saturday a girl said to me at the start line; "Somebody told me who you are. You used to race for lotto-belisol and you were really strong." It was nice to get confirmation that i truly was much stronger than now so i know my designs of being stronger are based on some real evidence - as opposed to my imagination. But to hear it in the past tense hurt a little. But it is what it is. Oh, and !!!!!!! damnit.

Glad that Jonas is taking care of you. When I used to race mountain bikes, I super hydrated the night before. That may not be a great technique, but I remembered it being helpful on my first century across Kansas. The heat was so intense doing the mountain bike thing, that I had a special rice pudding dish I made for myself which I found I could keep down before everything went Anarobic. Take care Christine and listen to Jonas!
Rickie

Ok, I've got it. Ask Sven Nys what he eats before a race and how he hydrates. Does he use suppliments or any special drinks such as electrolite drinks? You might want to add some questions that you may have that you think might help your racing program, which in turn will help our racing program. Did a great 37 miles today in the heat after work. I am getting much stronger. I talked to Mike Magansun the author of "Heft on Wheels" yesterday by email and he related about his 50 something old friend that rides and how it takes his body a while to warm up, but once it has warmed up, man watch out. I have noticed this about my conditioning also and where I am feeling stonger as my ride progresses. I do need to work on my diet.

Congrats on having a good time. I like the smiling picture. Always good to race with friends. And I am glad that you got the chance to sit at the cool kids' lunch table. Time to rude and obnoxious to some other "newbie".

Off to Ironman Lake Placid for Sunday. Wish me luck.

OMG you scored an interview with Sven Nys!!! WTG!

I'll have to respond with some questions...

Do you have pictures of Liz Hatch racing in Belgium?!?!