the wholeshot, that is.
After Saturday's race in Kontich, 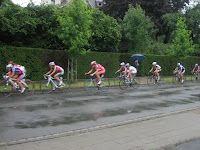 Belgium ended in frustration due to a crash that split the field in two (you guess it - i was in the second group) I never got a chance to give it a go off the front. As Coach Elmo says, "You can't win a race from behind." He was right. Surprisingly that was the only crash during the race considering the treacherous roads; rain does not mix well with cobbles or shiny pavement - neither the white nor black variety.


Even so, I attacked and went with breaks in a futile attempt to bridge the gap. Our efforts were always foiled by some gal who would either chase us down with the whole peloton in tow or reach us solo not contribute a drop to the workload. When we'd motion for her to come around, we would be greeted by puzzled look. If looks could talk, it would usually say, "Whhhhhaaaaaat... Why are you looking at me? What do you expect me to do. Do you think I'm in a bike race or something?!?" I understand these moves if they are part of a team strategy or even a personal strategy but unfortunately they are almost always not part of any plan larger than the one move it took to bridge to us. Strange.


Anyway, after a frustrating Saturday I was keyed up for Sunday's event in Zwevegem. I got myself a front row position and vigilantly held it. Girls pushed and shoved but i didn't waver. The course was a 3.8km simple gradual-up-and-down style loop - up one side and down the other - with the start line placed 2/3 of the way up the climb.


As i stood on the line, i kept a close eye on the race director. When he raised the whistle to his

mouth, I firmly grabbed the brakes and put full pressure on the pedal strategically aligned in the two o'clock position anticipating the absolute chaos that typically ensues within a millisecond of the whistle sound. I watched him take a deep breath and my heartrate must have shot up twenty beats per minute. When the screetch hit my ears, I exploded off the line - WHOLESHOT BABY!


I shot up the hill, made the tight left turn onto the church cobbles, rode through the kermis

(town carnival), passed skateboarders working on their tricks on the church steps, smiled at Guy Kostermans of Belisol who was in front of a cafe as he screamed my name, then it was onto a bit of twisty pavement before I was joined by a Norwegian gal. We worked together for a few minutes before engulfed by the hard-charging peloton. Game over...for now.

By lap two of 22, I was back at it again. And lap three, and four as well. Unfortunately for me my recovery after attacking is not lightning fast yet which forces me to wait a couple of minutes before going back out again. And in one of those moments of recovery the winning break was born. I watched them go but there was nothing i could do. The break waits for nobody. Actually that's not true but it sounds good in this context.

I joined in a few more mini groups trying to bridge to the front but none lasted. My last real effort of the race seemed the most promising. With four laps to go, I got off the front of the peloton with my former Lotto-Belisol teammate Kim Schoenbaert. I assumed it would stick since she had teammates in the group. Shortly thereafter I was reminded of what assume stood for. I finished the race firmly in the middle of the peloton. Considering I am still working my way back to fitness, I am pleased, but not satisfied, 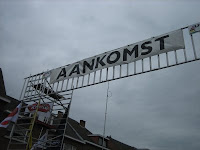 with the weekends outcome.


My upcoming races are Friday, Saturday and Sunday - three more 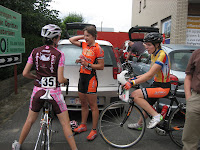 opportunities to shoot for satisfied.

(photo to right is of me, julie and adeline post-race and the one next to it is of the finish line banner)

Thanks everyone for reading!!
Posted by PEANUT at 7:21 PM

Vanderkitten still has the coolest kits in the peloton!

Congratulation for your race!
Your are in an Olympic form haha
Friday we will go out from the bunch together OK ?

Thanks steven - Dave of VK designs them. OK Adeline, it's a deal.
Thanks anon. Pretty goofy mistake i made. Keep reading and i'm sure you'll find more.

Hey Peanut,
Loved the pictures! Your such an inspiration. I had a great long ride Saturday. I rode out to see my parents in the country, and they live on a very long dirt drive on their farm. I thought of you and the cyclo cross thing. The criterium circuit must be very anarobic and instensly aggressive which is probably good for your cooler weather cross season. Oh, I also noticed the Vanderkitten tattoo on your leg. Now that is dedication.
Keep up the good work.
Rickie

It was a sneaky plug for the sponsor -- her Ahrens cyclo-cross bike is called the "Whole Shot."
-- E.C. Chamberlain

Sounds frustrating that people bridge the gap only to find they have no energy to stay with the break! But I guess they are just 'trying'.

Sunday's race was awesome eh? Your fitness sounds like it is coming back? Good job in getting to that first turn!

There must be a knack to that recovering on the fly, but you were mixing it up and getting in that break 4 from the end... never assume! :)

"I am pleased, but not satisfied" -Great quote - love it, it sums up so much.

Oh yeah and love the Tat - My wife wears the VK ones from Dave all the time!

I think E.C. nailed it. I was probably thinking Whole Shot from Ahrens. I stare at that bike every single day. I have one of them in the living room on the trainer. Even though i see it every day i still find myself staring at it in amazement that the guy (Mike Ahrens) made a bike that fit me incredibly well from the first ride on it. And the paint job surely doesn't suck.
Anyway...I love the VK tattoos. They are really fun. Jonas put one on his leg as well and a photographer came over to take 20 photos of it.
thanks chr15 for your kind words. I'm glad you loved my "pleased but not satisfied" sentiment. That is exactly how i felt.

I think i will change it back to wholeshot. If it hurts too many eyes, i may consider changing it back but probably not. hehe.

Love the second picture Christine, you look like you are really on the rivet!

You should put "Powered by Soy" across your rear. That would be pretty funny.

Funny! The truth is that i actually rarely eat soy because of the high protein content. But i do have a soft spot for veggie burgers so i can flood them with ketchup, one of my biggest vices.

You should put a sign on your wonderful behind, "Yes, it is me, a girl, kicking your Ass!
rickie

I think I would go to the MTB race.
But you can ask to my team mate Julie is she is going to Olen.
She would be happy to pick you up

Hi Christine, I have a question about your bike. As a Vanderkitten aren't you supposed to race an Ahrens bike?? I found it strange that you ride your road races on a Scott.