OK, well not yet but we're getting there. The last weeks we have had the worst heatwave here, with temps hitting the nineties (F, and in °C about 35) which is more than this country can usually handle. Heck, the houses arent even equipped with air conditioning.  Due to the piercing sun combined with the abnormally dry spell, the roads are falling apart, the whole country is sleep deprived and the farmers' crops are wasting away.  The crops are either dying or turning ripe way before their time.  The latest crop to get hit is wheat. It's now being harvested - way too early and way to small. 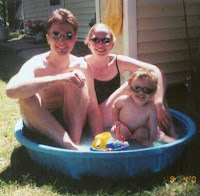 Every time the weather gets too high, the rainstorms come.  Our last was a couple of days ago. It rained so hard and so fast that the streets were completely flooded.  After weeks of being hot no matter what you did, we were tempted to play in the flood - until we noticed a manhole in the middle of the street with water spewing out, sewer water to be exact.  While we didnt take our planned dip, it did get us determined to buy a pool.

After two days of combing through all the stores and online, we realized every single pool in belgium is sold out! It is just never warm or sunny enough here to have a pool so the stores dont stock many of them. Just when we gave up all hope, we were handed a pool by Jonas' mom - a kiddy pool but beggers can't be choosers.

So this morning our priority has been to get the pool ready to go.  I wish i had a camera to show you how absurd it looks in the backyard. We have one of those traditional belgian backyards - thin and long. So we put the mini pool center square in the lawn. If you squint  - a lot - and use a little imagination it looks like a miniature backyard of one of those mansions where the pool is the highlight of the yard and the landscape is built around it.  (no, it's not the teeny tiny pool pictured at top. I just thought it was funny and had to unclude it in this post.) Now all we need are miniature friends to have a pool party.

Speaking of friends, one of my closest friends in the world has finally made it to belgium for a visit. We are like little kids when we hang out so now my jaw and abs are super sore from laughing so hard!

Gotta go ride now! Thanks for reading!!
Posted by PEANUT at 1:29 PM 3 comments:

life couldnt be better! Well actually it could be, and it is! The weather has been fabulous, I've gotten to do some amazing rides and even took a little time out for playtime - fitting it in between the Tour and soccer of course.

The last week definitely had more than its share of playtime!  Last friday, the weekend started off with a trip on the scooter to Leuven for a night of jazz concerts.  It was already past 9pm but the weather held at 30°C so i was sporting my tiniest spaghetti strap sundress and 3" sandals - still plenty warm on the ride into town.  (I wish i had a camera so i could have taken a photo of myself. You would never have recognized me!)  Every Friday in July, there are mini concerts given in each of the six squares in the center of Leuven. We concert-hopped until coming across Pim Toscani & The Dixieland All Stars. They were playing more of the classical jazz style where half of the songs were winged.

While Jonas and I sat at a table in front of the concert, with my glass of chardonnay in hand, I was instantly reminded of the magical evenings I've spent at Grant's Tomb in NYC watching the jazz concerts in the summer where the old-timers like Dizzy Gillespie would frequent. Chills ran down my spine as i replayed in my head all the wonderful memories I've had there.

The next night it was off for the concerts in Tervuren.  The town was having a weekend celebration in honor of the Tour de France which ran through their town that Monday.  But first I had to do my training ride of 3.5 hours on the MTB. Unluckily we were caught in the only rainstorm in a couple of weeks. It hit us ten minutes into our ride.  While the cold rain felt good on a day where temps were over 35°C, it totally sucked for the horseflies. For the next few hours, i was chased by various collections of horseflies who took bites at will.  By the time i was home i looked like the red polka dot jersey. That meant no sleep for a few days since I am fairly allergic to insect stings and bites.

But i didnt let that stop my evening out. Once showered, we were out the door again.  On the docket was Das Pop and Zornik, both Belgian bands.  We had a prime standing spot only fifteen feet from the stage, which I expected would be wasted on me since they were bands I'd never heard of.  Then in walked the Das Pop lead singer and i was mesmerized.  That guy spewed energy all over the audience. Watching the rest of the band was an entertaining experience as well. While i expected to stand at that spot for only two songs, we ended up planted firmy in place straight through to their second encore.   Another surprise was that I knew most of the Das Pop songs and even a few of Zornik's.  They play them a lot on Studio Brussels - the major pop radio station here which we have blaring in the backyard while we work on our bikes. 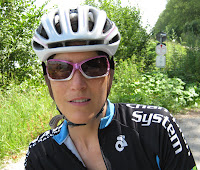 With no sleep that night - no, not due to a late night out but rather thanks to the itching bug bites - our day on the bike was subdued. We rode first to visit our friends Ronny and Livy to wish Ronny a happy birthday.  Then we continued to Grimbergen to watch the Tour de France. What a spectacle - not the race but rather the caravane that passes about an hour before the riders arrive.  There were guys driving oddly shaped vehicles like oversized furry lions while people hung off the sides and out the windows throwing free stuff to the crowds. We scored a couple of buffs (cloth tubes that can be shaped into hats, neck warmers, etc), cookies, candy, water and some other stuff i can't remember.  But we didnt score nearly as much as the handful of cute little kids five meters in front of us who jumped up and down for the freebees - it worked. By the time the gift-givers re-loaded, they were already past us.
(photo taken by Livy on our way to Stage 1 TdF)
Of all the giveaways, the one that painfully eluded us was that polka-dot cycling cap that you see dotting the sidelines during every stage of the tour. We went back the next day to try again, but this time on the scooter so we could find a spot void of all cute little kids.  We also brought backup in the form of our friend Jo.  He was on motorcycle so he could intimidate any little ones that might think to stand near us.  Mission accomplished.  We left with two coveted polka dot caps and even a few other treats that we didnt expect like a white Skoda bucket cap and some glow ankle bands among other goodies. Oh, and we also scored an official Tour de France course arrow which hangs proudly on our wall pointing below to the TV.
As for the racers, they go by so quickly that by the time you figure out who someone is, it's way to late to cheer. All you see - and hear - is woosh...  After that, we headed back to Tervuren for some more concerts. First we watched a kid band. The singer was so awful in both her singing and dancing that my eyes stayed glued on her as if watching a train wreck in slow motion. Pity because i think the other band members were possibly quite good.   Next was a band made up of previously famous Belgian musicians.  While the music may not have been my taste, I could appreciate their talent. They seemed to have had the most fun on stage of any band i'd seen in the last days. Their enthusiasm was easily contagious as it was the first time i saw Jonas dance outside of our house.
By the end of the day, I was "social-life'd" out!  I expect it will be a while until i go out again.  But then again this is Belgium where there is an unusually large emphasis on quality of life.  Oops, come to think of it I have a wedding to attend Saturday.  It's Ronny and Livy, so I can be sure there will be some partying going on.  Better get some rest....but first I have a few trainings to do. Tomorrow is Begijnendijk.  Maybe i will see some other crossers on the ride like Sven Nys, Niels Albert, Helen Wyman, Vincent Bastaens. Always fun.
Thanks for reading!
Posted by PEANUT at 11:07 PM 2 comments: