I earned that honor of subjecting myself to a set of x-rays when i behaved inappropriately at the doctor's office this morning.  My doctor had me lift both arms so he could put his hands on either side of my torso. But when he lightly squeezed, instead of telling him whether or not i felt anything untoward, i sprung across the room to hide behind Jonas.  Well, it was either that or a punch in the face due to my natural "fight or flight response".

He tried to coerse me into coming back over towards him but i was in such pain I couldnt quite make out his words, although i expect it was something like, "come on over little girly, wanna piece of candy? I dont bite."  It didnt work.

In hindsight i realize that my response was a bit bizarre but at the time it felt like the smartest thing to do.  At least Jonas didnt get up out of his chair and pound his fists against his chest in my defense as i firmly hid behind him. haha!
Posted by PEANUT at 2:37 PM 5 comments: 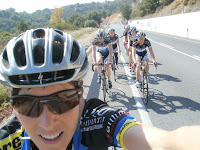 to be at a training camp as the only girl in a boy's cyclocross team?

CLICK HERE to read all about the ins, outs, ups, down, highs, lows...

Shot for the stars but landed on my head


The first of my scheduled four races went quite well. At the Begijnendijk road race in BE i sat comfortably in the peloton, finishing 29th in the bunch sprint out of 70 starters.

As my next two races located in Holland were UCI international events, where you need to be part of a team to participate, I guest rode for the  Green Coaching UK team.


﻿ The first was Valkenburg Hills road race.  It was unfortunately not as easy as my last road race which i expected considering it was a higher level of competition.  With little peloton experience this season i found myself too far back when the neutral section ended and we were dumped at the base of narrow climbs at the start of the race.  My "excuse me, pardon me, can i get by" only got me so far - ok, well actually not one gal moved out of the way at my request. So by the time i got to the top of the narrowest climb, the gaps were already formed. Considering it is not possible for me to ride faster than or even as fast as the fastest gals in the race, i was pretty much relegated to my position.  I was, however, able to move a few spots up over the next kilometers to somewhere around 80th (out of around 150 riders) but since they only counted up to 72nd position in the official results, you wont find me and the rest of the gals who came in after the cut.
The second race of 7-Dorpenomloop Aalburg was significantly worse than the first considering it left me in agonizing pain and covered in itchy welts.  This time around i got to the start line early so i didnt have to fight to get near the front during the neutral section before the race started. Somewhere after 10km into the race, i thought to myself, well this is going well. I feel nice and comfy. BUT shortly thereafter I was smacked into by an out-of-control cyclist. She hit me so hard that two of my spokes were crumpled. I had a split second to choose if i land in Nettle bushes or on the pavement and i chose the former. Still not sure if i made the right decision as i sit here, not even able to breathe without pain - and the itchies from head to ankle surely dont make things easier. In addition to the Nettle poisoning, i severely tore the muscles in my back in the rib area. If i find a comfy position and dont move, then i only have pain from breathing. Otherwise, if i make a wrong move - or almost any move - i have a stabbing pain in my back so strong that at times i come really close to the lights going out. Ugh.

I know this too shall pass and i should consider myself lucky considering it could have been worse (ie. Marianne Vos broke her collarbone in Valkenburg Hills) but it doesnt seem to make the pain go away.

With all this said, I am sorry to say i will be sitting this weekend out from racing - no Belgacom Antwerpen MTB for me.  My goal is to try and get on the trainer by the end of the week - fingers crossed.  I miss my bike already.

As i have not received a team mountain bike this season (and my current bike is 10 years old and half falling apart), i have changed my whole race schedule around for the summer - now focusing more on road races.   But as i am changing it all around so late in the season, my racing will be limited.  I will try to throw in a few mtb races here and there because it's so much fun, although my current mtb may not be so happy about this!

My next 4 races are: 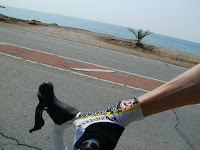 Sorry...again...for being so lax on my blog updates. Just to catch you up quickly, here are links to two stories i wrote on my Tour of Cyprus race experience almost a couple months back.

They are completely different stories from different angles, by the way. One is more of my goofy view of the trip and the other is more of what it is was like to be in Cyprus.