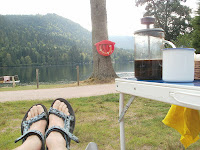 Just back from 11 days in the Vogezen - a very hilly, beautiful region in France - for a pre-cross-season training camp!  It was such a wonderful experience! Not only did it get to climb forever every day but the pre/post playtime was just as rewarding.  Before every ride, Jonas and i got to sit outside of our camping right on the lake (xonrupt-longemer) enjoying our breakfast of fresh coffee, fruit, and bread (baguette of course) with a bit of muesli.  And after our ride, we'd head into the water to play. 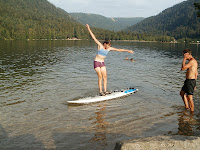 On one such afternoon, our neighboring camper named Bernd treated us to an impromptu windsurfing lesson. That was simply TOPS!

I still have to accurately calculate my ride details but for my 8 training days in the mountains it is something around 31 hours to cover 650km with 16,000 altitude meters.

More stories to come to cover the rest of my trip to NYC and NJ as well as my trip to France. But first i have to go out for pizza at our favorite restaurant where they make the ideal vegan pizza with fresh arrugula on top. 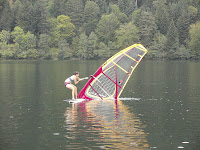 Before i start gushing about my trip to NY i first want to let you know that another interview of me was just posted on the Earth Balance website.  They make some of my favorite vegan products!
Click HERE for the link to the article.
Thanks for reading!

Posted by PEANUT at 5:04 PM No comments:

From post-Tour crits to NYC

Well, I (mainly) successfully completed 5 races out of 6 days. the first was 10th, the second i did a few too many time-wasting efforts in the first round and suffered for the rest so I 'm going to forget about that day, the third was 17th place and feeling better, the fourth was also solid and finished again in the peloton sprint, and finally by the fifth race i was feeling completely comfortable with the pace of the race and finished 22nd i think in the bunch sprint.

The evening of my last race, Jonas and I had a great time hanging out with a great bunch of folks to celebrate the end of my mini-overload of racing.  I lived large with a ProBar in one hand and a Zen Republic Energy Drink in the other!

The next morning I was on the plane to NY. Going through London was not as crazy as i thought it would be. I think the folks at the London airport were also expecting a mad rush considering the dozens of "information" workers patrolling the terminal in an effort to herd the masses.  They were so bored that i was accosted by a few of them begging to help me find my way - which was unfortunately not necessary.  One such woman ran up to me as i was entering the security baggage check area.  She said, "Hello, are you in a rush?" I replied, "No. Did you want to talk?" She looked confused. It was then that i realized she was just trying to offer me the fast-track lane through the security check.

On the long flight from London to NY i sat next to a guy flying back from India. He pretty much slept the whole way.  When we did talk for a few minutes in the beginning, I found out that he was 50 years old; I was shocked. he looked about 35.  but when his "special meal" arrived i figured out his secret - a vegetarian! Not only was he an easy flight companion but he proved to be a very kind one as well. We walked to customs together then onto the baggage area. When i attempted to pay for a cart to carry my bike and bag, my Belgian Master Card didnt work - all five times i tried it. I still havent figured out why that happened. But anyway, the stranger treated me to a cart -a whopping $5. How kind.

﻿﻿
﻿ The next morning Ronnie and I took off from NJ and rode our bikes over the George Washington Bridge and all around Manhattan. We also stopped off to visit Ruth and Bill who have been like parents to me for a few years in my early 20's. They are my heroes! At 89 and 94 years old, the two of them have such storied histories. What impresses me most about them is that they are more active and living life more than many folks i know.  They still work fulltime doing what they love and every weekend they still drive to their country house to enjoy their downtime.  We are meeting up again with them on Monday for dinner when they return.
The next day Ronnie and I went offroad riding. He took me to Bear Mountain area on some really rocky steep technical trails.  I loved it...until the black flies found me and stayed by my side the whole time.  And just when I am climbing the steepest of all climbs on a bed of rocks, one handed so i can use the other hand to swat the flies, Ronnie yells to me, "Keep your eyes out for black bears with their kids." Shit. I suppose if i would have remembered to lower the tire pressure before i went offroad it would have helped my situation that fraction of a bit.

That evening we headed back into Manhattan for Afgan food on St. Mark's place.  It was strange to be back in my old stomping ground.  I used to live on St. Mark's Place between 2nd and 3rd avenues where all the grunge wierdos paced back and forth.  Now the block is more like yuppieville with a bunch of chique restaurants and tattoo parlors.  As we passed one of the tattoo parlors, the guy said, "Step inside. We have fresh muffins...or not." If he would have said the word "vegan" i may have given it a gamble.

But instead we headed down the block for dessert to a vegan bakery called Whole Earth Bakery. I opted for the Chocolate Chip Chewy, which looked like a brownie.  How disappointed was I. There was nothing chewy or even tasty about the dessert. it was rather like eating cardboard.  I only had time to visit one bakery so i didnt have a second chance.  Luckily we passed a pizza place on the way home where i could get a garlic knot (with a spot of tomato sauce) and an italian ice for dessert. wow, that tasted unreal. I got the pina colada flavor.

Today we are going for a nice long ride somewhere - not sure yet. The temperature is still hovering around 96°F (36°C) so you can bet my pockets will be filled with water bottles. I cant even remember the last time i was this warm.  Actually i just did.  It was a while back when i raced for Lotto-Belisol Ladiesteam.  We drove to France for the Tour de Limousin stage race in a heatwave.  When it came time to suit up for the time trial, we were all almost crying when we had to put our socks on - it was that warm!

Thanks for reading! I'll try to keep this blog updated so you can follow along on my silly adventures.
Posted by PEANUT at 4:39 PM 2 comments: