I finally finished my last hard effort on the cyclocross bike for the season.  It was at an "exhibition" indoor race in an arena in Hasselt, Belgium.  I never knew exhibitions could hurt so much! It was two days ago and i can still barely walk around normally from the pain in my legs. Part of it is from doing a somersault in the sand pit when i t-boned a gal who crashed right in front of me and the other part was maybe from all the running, jumping, etc...or from the extended post-race time of standing on my feet in celebration of the season's end.
You can read all about it HERE on the CYCLOCROSS Magazine website.  It is complete with photos.  You can also find additional photos on my facebook page for your amusement!

Tomorrow is the last time the Zannata cross bike goes out for a stroll.  I am taking it to the retirement race for 3x World Champion Erwin Vervecken.  A few of us racer chicks are on a heated discussion on facebook as to whether or not we will race it with skinsuits or do the cyclotourist thing.  I told jonas i will do what he does that way i dont have to decide. But maybe if all the gals go with one-pieces i may join in. Wanna come too?
Posted by PEANUT at 4:24 PM 3 comments:

Last Sunday was my last big "official" race of the season. It was GVA Trofee's Oostmalle event.  The course was lots of fun - very mountain bike-style, the crowds were incredible and the aprés-race parties a blast!!!
I wrote all about it on the CYCLOCROSS Magazine website that was just posted today. Click HERE to read it. There are also a million photos to see as well.
Tomorrow is my last big "unofficial" race. It is called Cyclo Cross Masters - an indoor cyclocross race. Even though it is not internationally ranked, i am fairly certain it will be the hardest! Only twelve gals were invited - and most of them ranked in the top ten internationally. But as for the course, I just saw a video of it and it's like no other!! Click HERE to see all the crazy jumping ramps, sand pits and stuff.

Photo of Jonas, my new official photographer, was taken by Marc Van Est, the one of me holding the incriminating evidence as well as the top photo the was taken by Francois Buyssens.  The last was by Dirk Verhelst.
Posted by PEANUT at 11:07 PM 3 comments: 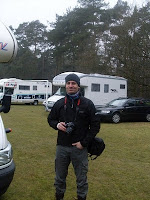 Thanks for reading!
Posted by PEANUT at 8:23 PM 2 comments:

This Sunday is my next speaking engagment.  Its at the ECOPOP fair - basically a celebration of everything GREEN.  On their facebook page, they describe this event as "ECOPOP / bio lifestyle fair / is the first mainstream fair about everything that comes close to bio - eco - sustainability or organic stuff..."  What an honor to speak there!  I am going as a spokesperson for Organic Athlete and In Defense of Animals.

I am actually very excited about it even though i havent really settled on what i am to talk about.  It is at 3pm in Kortrijk, Belgium for anyone who wants to send me good vibes or, better yet, show up and pretend to be entertained!!

On another topic, I just received my international press/media ID card in the mail this week.  It is nice to now have all access to events. Then again, i have always had all access to events without the card so I guess not much will change now that i have it. Even so, it's fun to have.

There are only three races left to the season then it's off the cross bike for a bit of time.  It will be strange to ride a road bike again after all these months. I wonder if i remember how to clip into the bike with my road shoes.  What will be stranger than getting on the road bike after a few months will be getting on a mountain bike after MANY years!! That's right. I am once again making use of my pro mountain bike license.  My first mtb race is March 21st, and April 4th is my first UCI mtb race. Depending on how they go, I may or may not race the Houfalize World Cup in Belgium. We'll see....  Either way if feels invigorating to be doing something other than the usual road racing over the summer.

With the mtb races so soon after cyclocross season, I'll be skipping the usual post-season break off the bike.  There is also another event that i want to have some fitness for - Tour of Cyprus which is from 25-28 March.  They have two separate events - one for cyclotourists where you ride your own speed, and the other is for racers - men and women, everyone together.  Jonas and I are doing the latter, which means that we will be standing at the start line every day with pro riders and pro teams like Turkish national team, Greek teams, etc. I still havent seen the start list so I am a little nervous, especially since most of the stages are climbing-heavy.

But even if we finish behind the race, we will at least finish before the cyclotourists which gives us more time to sit around and do nothing, maybe drink a couple extra glasses of wine while we wait for everyone to arrive.  To greet the cyclotourist riders upon their return is Jonas with his camera. He is one of the official cameramen for the event.  He is even upgrading his camera for the event.

My next race is this Saturday in Lille, Belgium. It is the penultimate round of the GVA Trofee.  It is the most sand-heavy event of the season. It will be a total Challenge Grifo XS tubular kind of day! CLICK HERE to see a video of the race. After my race i will be interviewing the new U-23 World Champion Pawel Szcepaniak of Baboco-Revor. Coincidentally he rides on the same bike as I - the Zannata Z45 Cross bike designed by 5x World Champion Roland Liboton.

Thanks for reading! And by the way, we almost hit 10°C here in belgium - a first in many months!!! I think i even saw what resembled a sun.
Posted by PEANUT at 8:59 PM 4 comments: