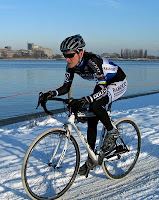 My next race is Zolder World Cup this Sunday. I wish you could be there because i am having a cookie party after the race for all my supporters/friends, and fellow racers!  on the menu is toffee bars, tahini cookies, sugar cookies - all different shapes and colors, fudge with walnuts and my favorite - mexican chocolate cookies-hot, hot, hot!!!

Have a wonderful holiday season and have a glass of champagne for me please (since i am in the middle of racing season) !!

Racing with the Guys

Last weekend was US National Championships, but as i am Belgian-based, i opted to skip the arduous trip around the world to Portland.  Besides with Katie Compton on the start line, we'd all pretty much be racing for 2nd - or rather 3rd since Georgia Gould was also present.

Instead i spent my weekend competing at a local race against the guys here in Belgium.  It was so incredibly worth it.  Not only did i get an excellent workout in, but i had a very entertaining day of it.

The race was Vlaamse Wieler Federatie's (Flemish Cycling Federation) "World Championships" held by De Morelgem Vrienden as a memorial/fundraiser race for Danny Vettenburg who died from cancer.  When i showed up at the start line, i could tell a few of the guys were confused. I am guessing the rest of them just thought i was a junior boy - as usual.

My start was fairly solid until we hit the dirt where our wheels sunk into the soggy ground.  The whole course in fact consisted of soggy ground so i was in for a real power workout.  Against guys, who naturally have more power, the only thing i could really do is race my own pace and hope it is good enough not to be too embarrassed. by the end of the race, i had passed enough to finish in a surprising 5th place.  Naturally i was elated considering my goal was to not come in last.

A few moments after i finished, i got called to the podium for the awards presentation - an impromtu one for their only woman rider.  I got a "Christmas Plant", a shirt, and 10€ prize money which i spent party on the post-race tombola (raffle where everyone wins.) As i stood up on the podium, i heard a loud roar from the beer tent - my cheering section that screamed for me, bringing a huge smile on my face every lap.

Once my post-race routine of trainer-riding, recovery shake and cleanup was complete, Jonas and i headed back to the race site for a relaxing drink while watching the womens category breeze by - some wearing belgian national jerseys and others with the european championship jersey.  There must be some sort of agreement between the Vlaamse Wieler Federatie and some other organizations where they win these jerseys. I havent figured that one out yet.

while it could have been fun to be back in USA racing against friends, I made a few that day at my local race.  And the organizers were exceptional - friendly and extremely helpful.  Hopefully i can attend this race again next year.  Anyone want to join me??  If so, here is the link: http://www.vlaamsewielerfederatie.be/totaal.htm

This foto came from the VWF's facebook page.  If i can find more photos from the race, i will surely post them.

My next races against the gals are this weekend - Scheldecross this Saturday and Kalmthout World Cup sunday.
Today was a hard motorpacing workout in preparation for the weekend.  The weather here is still unsavory so i equipped my bike with Challenge Grifo tires to combat the snow and ice and it really helped a lot. I felt very safe, even around the questionable turns.
Another bit of help i got to make my motorpacing a solid effort was from my Blueberry Fruition Bar  - the sports energy bar from PROBAR.  I ate one just before my workout, and a few bites during the effort and i really felt the difference!

Thanks again for reading!
Posted by PEANUT at 7:37 PM 2 comments:

Two Jobs Rolled into One Weekend