The Race to Train

Now that the summer is almost over i am finally getting in some racing to prepare for cross season. I would have started earlier but injuries got in the way. I was nailed with a nasty 3rd degree groin pull, while the other groin was only 2nd degree. Walking up the stairs to the bathroom became a workout in itself! I was so slow up the stairs that i had plan my pee trips well in advance! Getting back downstairs was a breeze - i was so fast i flew down...headfirst a few times when my legs just gave out.  I used to joke about that chair lift that you can attach to the staircase railing, saying it was the perfect gift for an athlete but for that period of time i was really wishing one would magically appear. No such luck. 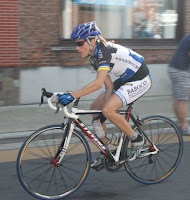 Once i was finally able to walk up and down stairs without falling on my face, i was ready for training again! My kickstart back to highered fitness was a training camp end of July in the Vogezen region of France. Jonas and I stayed there for eight days. It was cold and rainy some of the days but i didnt care - i got to ride basically painfree! But how slow was I!! It was humbling to suck so badly but i kicked my own ass knowing that it was for my own good.

Once back, we joined in for a couple of weeks on a collection of group rides for some low-mod tempo rides - the Old Mans ride (although their nickname is beginning to be ironic since they now attack the ride as if it were a race), the Kiek out of my hometown (an evening group ride that does a nice steady low-mod tempo that provides for an almost mindless training), and the Sterrebeeks (yet another steady ride where the hills are the only places they race each other.)

I knew i wasnt quite ready for training races but with cross season around the corner, i started up. Last weekend was my first race. The speed was super high but with not so many turns where interval training is required, i was able to easily ride it out with the peloton. Considering the last two years i was not able to finish this race, I was pleased.

My second road race, which was today, did not go nearly as well as the first race. On paper, my 34th out of 80-100 starters doesnt look so bad, but I suffered badly this time around.  There were just too many tight turns on narrow roads, which meant repeated intervals.  Heavy rains that started up part way into the race did not help. It meant that on every turn, you had to go from now a mere 5kph to 50 in two seconds. That hurt - especially since i was sitting way too far back in the peloton when the rain started.  After many many turns like this, combined with bridging too many gaps left by riders who couldnt hold the wheel, i was completely blown.  It was a good workout but still i wanted to rock it for the folks who were kind enough to come out to support me today!  I had yet again a very large cheering section - super cool!!

Next week is yet another chance to dig deep in honor of the upcoming cross season so bring it on - that's what i always say (or at least when the optimism is still there.) :-)

I will have my cross season schedule posted shortly. I am almost done working on it. Hope to see you out there one of these races!!

Thanks for reading.
Posted by PEANUT at 10:57 PM 2 comments: 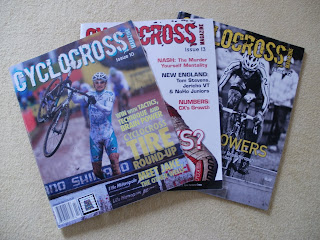 CYCLOCROSS MAGAZINE NOW HAS A DIGITAL VERSION AVAILABLE– especially for those who live outside USA or on their computers! Order NOW to get a 12 month subscription PLUS back issues 8-12, for the PROMOTIONAL PRICE of $20 USD (in Euros this comes out to €13.85). Start reading EVERYTHING ABOUT CROSS and checking out the gorgeous color photos TODAY! Thanks! (I am one of the writers by the way)

Show your support by subscribing to CYCLOCROSS MAGAZINE !!!