Yeah, you read it correctly! I wouldn't have believed it if i weren't there to see it myself. 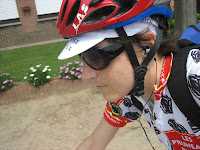 Yesterday i joined the old guys group ride for a little rest and relaxation. This ride could always be counted on for 80-110 km of slow, flat spinning. But this time was different. After thirty minutes of predictable speed and terrain, all hell broke loose. The pace shot up AND we crossed the tracks to enter the "hilly" area!

At first, I figured they'd simply found a way to navigate through the various pitches in elevation. As we approached the first road heading in an upward direction, i scanned the area for our turnoff. None existed and up we went! I was in shock - and so was my heart rate. At on 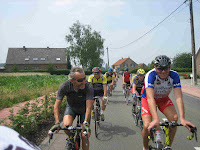 To make things worse, as my body was trying to adjust to the change in dynamic (translation: as i was suffering, trying to make sense of it all) the guy with the HUGEST bier belly came flying by me up the hill. As he passed, he turned to me with a smug grin on his face. In that moment, I wanted to take my bike and throw it off the next overpass. That was...until i saw the most fit guy on the ride just behind beer belly guy sporting the same smug grin while riding one handed - his other hand was pushing beer belly guy! Yeah, they got me good! Very funny!

Still puzzled by the new face of the old guys ride, I turned to my riding partner (no, not Eye Candy - he was a no-show so I magically partnered with a baker...yum!) to inquire. Apparently, the previous ride leaders realized that they were no longer able to slow the ride 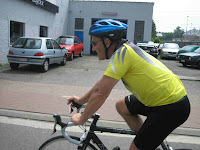 down to cater to their aging bodies, so they let go of the reins and left the group.

About two hours into the ride, we stopped at an intersection to allow about forty cyclists to pass. As we watched the other group go by, I couldn't help but to compare the two groups. They were both roughly the same age range but completely opposite in their athletic ambitions. My group sported fancy team jerseys and matching race bikes (in fact there are even some former professional cyclists amongst us) while the other wore street clothes and rode town bikes. While my thoughts wandered even farther into the difference between the groups (ie. is it a 'singles' ride since half their group is women? are they riding to a cafe? are some of them looking at us 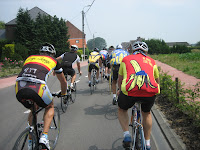 in envy because their husbands dragged them to the 'slow' ride instead?), Mr. Baker turned to me and said, " I bet that's where our former ride leaders ended up." The way he said it nearly caused me to make a puddle in the middle of the street! Thank GOD for ample padding in the bib shorts!

By the way, there is a story behind the banana jersey. Apparently this guy used to carry a banana in his jersey pocket on every ride only to have it swiped by the other guys as a joke. Now he wears a banana ON his jersey so it can no longer be swiped!

otoh , I see at least 2 guys without a helmet in that group.. so that would be a no-ride for me.

When I guide a tour, someone showing up without a helmet doesn't ride. This is the law.
I won't be held responsible for other peoples' stupidity, having to deal with head injuries and nearly-cracked skulls. Have you ever seen the result of someone falling on a rock or on the tarmac without a helmet? I have. It's not pretty.. I had a spare helmet in my car for quite a while because people tended to *forget* their helmet when showing up for a tour . Now I don't even bother, it's their loss.

What are you, some sort of helmet nazi? Surely it's the individual's choice whether they wear a helmet or not.

If I am leading a ride it's "no helmet, no ride" They can ride all they want without a helmet as long as they don't involve me. We can lose our insurance if we allow helmetless riders.

I have stopped my Tuesday rides and waited until the sans casque rider has left.

captain b : Sure, any individual is free to ride without helmet, , but NOT on a ride I'm leading. I don't stand alone in this, the club I'm with has the same policy. If anyone turns up for a ride without a helmet, they can ride on their own.
I respect your opinion, pray respect mine. Thank you.

I have to agree with the helmet fascists. Time’s up. Like everyone who writes one of these rejoinders, I trained and raced my entire career without a helmet, except in Holland where we were required to wear the leather S-&-M contraption. When, seven years ago, the parents of a junior protégé who had been badly injured in a training crash threatened me with a lawsuit -- because they quite legitimately felt that their son was imitating my bare-headed example -- I had to take a step back and really look at my self-centered and self-anointed position on this question. It still pains me that the helmet has become a shibboleth for safety-mongers in a way that completely takes one’s eye off what is arguably a far more important concern: riding the bike with skill, keen judgment, prescience. We need to be able to say, in equal and convincing measure, that “Casartelli was going too fast,” that “Kivilev was not paying attention to his front wheel,” and so on. And we need to be able to broach the topic of false sense of confidence (whether talking about helmets or anti-lock brakes or fire alarms) without encountering immediate, fulminating derision. The helmet is not an excuse or license to push the edges of the risk envelope. But enough is enough. The things really work, don’t look that bad or weigh that much any more, and so many pros wear them for training now that even fantasy codgers can buckle up at no sacrifice of vanity.
-- E.C. Chamberlain

If it's a club ride and your club is at risk of getting a bad reputation or even a lawsuit, then fair enough.

I always wear a helmet for fear that some kid will see me without one, think it's OK and get killed the next day when he falls on his head.