I barely missed California until...

I rode in the Ardennes last Saturday! Starting with the 47th pedalstroke, I had a perma-smile 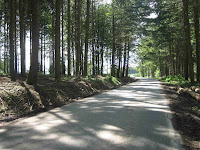 for almost five hours straight! (the ride probably would have taken only four hours at a normal pace but I am still building fitness so the speed was piano at best.)
I expected that it would feel good to climb for more than three minutes at a time but i was not prepared for the level of excitement I experienced. Not only was the actual climbing a blast but the scenery blew me away - it reminded me so much of California's 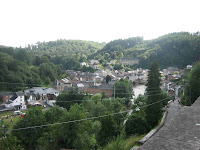 North Bay terrain that it was almost eery. If I were dropped from a helicopter anywhere in the middle of the ride, I would have been hard pressed to believe I were somewhere else other than Mt. Tam or West Marin area. Even the weather and scents were a perfect match! We rode 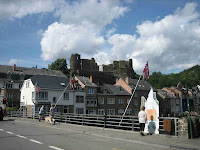 through a few microclimates to include a 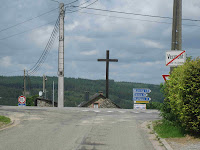 mixture of clouds, warm sun and chilled fog while breathing in varying smells of flowers and manure.
Aside from my stopping periodically to pee or take a photo, the whole ride was spent either climbing or descending. I was in Heaven! After holding in my excitement for almost four hours, i finally screamed out loud and nearly blew Jonas off 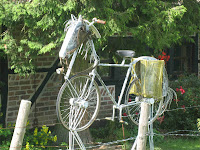 his bike! It was an adventure I will never forget! The good news is that I may have the opportunity to ride there again for my birthday next week (19 July) - depending on the weather! I will steadily pray to the sun gods from now until then in hopes they grant me my birthday wish. 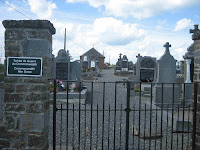 The horse are is a play on words of the old term for a bike here in the Flemish region of Belgium. The bike used to be called an ijzeren paard, which translates to iron horse. 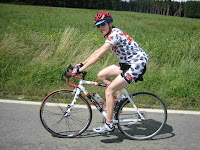 hah, La Roche.. lots of steep climbing to be had there, whichever direction you take , it's always going UP.. did you ride all the way to Houffalize? I usually do a La Roche - Baraque Fraiture - Houffalize triangle.

yes, we rode near houffalize.

bloody hell that's a lot of spacers on your steerer tube!

It does look like northern CA. I get goosebumps every time I ride Alpine dam or four corners knowing that I'm only a few mins from big city.

Hopefully you get your birthday wish...(its nice here in CA, not even too hot like normal July)