Yep, this Vanderkitten headed out to play again last Saturday in Lille, Belgium at the UCI race 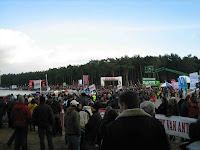 Krawatencross. Good news is that my head was fine. Seems the concussions got bored from all the recent physical inactivity in my body and disappeared. Bad news is that with only one week to really train, it's nearly impossible to put in a good effort at top level international races that's heavily attended by many former World Champions, World Cup winners, etc. But even so, I had a BLAST! I was beaming ear to ear even before the race started.

I pre-rode the course with a few other Belgian gals, Sharon and Veronique, and had so much fun. The course had everything a cross racer would want - metal bridge overpasses, beachfront trails where you get to play in both sand and water simultaneously, berms, multiple loop-de-loops 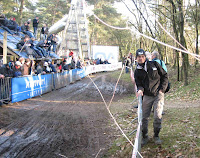 The race start was super fast straight up to the tight U-turn onto the dirt. I was near the back of the field due to my rusty start, but i didn't fret. I figured i'd just calmly pass the riders one by one until the race is over. What i didn't take into consideration was the sand section that almost immediately follows the dirt U-turn. The extended sand pit had only one sliver of rideable trail, so by the time the gals excited this section the gaps between us were exponential. My hard effort for the remainder of the race got me past a few women but still left me in 19th overall. But it was a thrill even so! Every time i passed a gal, it was a battle to hold it. There's nothing like the thrill of play on a battlefield of bikes!

With only two big UCI races left of the season, I don't have enough time to make a comeback to my normal form but it does give me two more opportunities to enjoy what i love doing most - racing my bike! And it's also good for the sponsors. I may not have won the race last weekend, but i bet I easily had one of the largest cheering sections again. The "Kom op Poezeke", "Allez Christineke", "Vanderkatje" cheers are always a very welcome sound. There were two sections of the course, in particular, where my cheering section was SO LOUD, I couldn't help but smile. And once they saw my delight, they yelled even more loudly!

Watching the mens race was almost as exciting as doing it myself. By the time we got to the course, the men were already on their third lap of maybe ten laps. Niels albert was ahead with Sven Nys on his wheel. As usual, Bart Wellens was quite a few spots behind. Shortly after that, Albert took off and left Nys all alone to be engulfed by the chasers. Eventually Wellens caught up to Nys and the two of them came to the finish line with Wellens taking the sprint from a dejected Nys who didn't bother to give it a go. 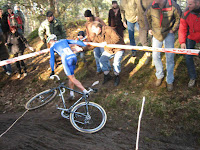 To the right are photos of Nys just before and after he crashed - a rare occurrence for him.

I assume Jonathan Page opted not to start after the debacle that occured at this race last year where his manager, Franky, was brutally beaten to the ground by the race security who thought he was trying to gain free entry to the race site. And guess what? This year, entry is free for the racers AND three supporters!

Lars Boom, our new Cyclo-Cross World Champion, was even farther behind - the last of the fast 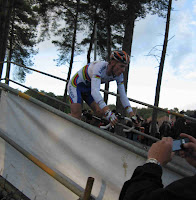 guys! With about twenty minutes left of the race, Boom pulled to the side of the course and slipped under course rope. Game over. According to the other racers and spectators, he was still partying from winning Worlds. The funniest comment of the day easily came from Jonas. He said, " Boom is just a little bush today." Boom in Dutch means tree, which instantly gives Jonas' comment a double meaning. When he first said it, I thought he meant that Boom was a little tired (bushed) but then the second meaning hit me. Belgians are known for their creative play on words, so i should have caught the second meaning right away!

Before the Superprestige race the following day, the other racers were asked for their impression of Lars Boom's decision not to start the event that day. Wellens was quoted as saying that it's fine for him - one less guy to fight with for the win. The others, Nys, Albert, etc, all agreed that you have to be almost dead before opting not to start at these highly attended post-Worlds events, especially when wearing the World Champion jersey. The spectators all come to catch a glimpse of the coveted jersey. The other racers went on to say that showing up at the 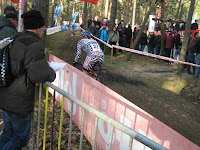 races is their job - he needs to do his job for his employer.

Thanks again for reading!
Posted by PEANUT at 11:58 AM

Congrats!! Great to read about you being back in the mix of things over there.

And perhaps the concussion decided that it needed someplace with some more living space. Another possible theory.

Thanks GCD! Yeah, it felt like i was actually racing my bike for the first time in a long time! I agree. My concussions may have evacuated for a bigger dikke kop (big head). hahaha!

Poezeke.. just as nice a nick as Peanut I say :)