Since the race finished in a sprint there isn't nearly as much to say about it. Just after winner Oscar Friere crossed the line, they interviewed him in Spanish, then translated what he said into dutch. Based on my fluency (or lack thereof) of both languages, his interview was pretty boring. He basically said his legs were good and the team was strong. Oh, and he said something about being the first spanish rider to win the race. He then listed his next goals as Amstel Gold (saying that"The hard part is to finish in a group; sometimes i did a good sprint but not for the first position"), Tour de France, Olympics and World Championships.

They also interviewed Robbie McEwen about the sprint and he said that the peloton shot to the right, then to the left and boxed him in so he had nowhere to go.

One problem that's been growing in these pro races is the interference of the motorcycles (photos/video/police.) They get too close to the breakaway riders who obviously use them to draft off of to get a gap.

Mark Cavendish had a few angry words to say about the race afterwards. He said it was too dangerous to sprint. People who can't sprint were giving it a go today because it was a headwind into the finish. He thinks they have every right to finish - especially since it's a one-day race - but it made it too dangerous for those who are actual sprinters. He was almost crashed out five times during the finishing section and didn't even get to sprint. He seemed pretty peeved!

One rider absent from the front of the race for most the day was Tommeke Boonen. According to what he has been saying in interviews, he's saving himself for Paris Roubaix this sunday. From the looks of his effort level the two times i saw his face up front, he looks to be enjoying some nice form!

Sorry i don't have any more stories to tell! I expect Paris Roubaix will be a lot more exciting!

On another note, it turns out that Angel Gomez - the Saunier Duval - Scott guy who crashed in RVV got off easy from his nasty crash. He only has a cut in his knee and a broken elbow. He 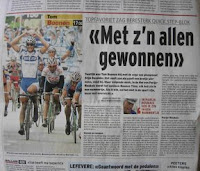 expects to be back racing in a few weeks. In an interview, he said that he had his head down to look at his bike because he was having mechanical problems and never saw the raised platform. The only part of his bike that was able to be salvaged was his water bottle cages!

Here are a couple of articles that were in Monday's paper following Tour of Flanders. Boonen is basically quoted as saying that he was naturally happy about the win of his teammate Stijn Devolder. He felt as if he won a little. He also talked about once Devolder got a gap, he encouraged Devolder to go for it. But as they say in the article, But next week, in the hell of Parijs-Roubaix becomes Boonen Time again.

On the same sports page, Cancellara is quoted as saying, "being the favorite

The headline of the Devolder article is one of my all time favorites now, "Mijn Kinderdroom." This means "My childhood dream." Below his photo there is a short article about Tour of Flanders Wins in the National Champion Jersey.

Second runner up for best headline is the one below the Boonen article. "Geantwoord met the pedalen" (answering with the pedals.) Love that!
Posted by PEANUT at 4:41 PM

Thanks for the G-W post. Work don’t take too kindly to me having cycling weekly up on the screen whilst I am [supposed to be] working, so I didn’t catch any of the race. Sounds like it wasn't the exciting race that The Ronde was, but was it ever gonna be with Roubaix this coming weekend?

Boonen was probably right to stay off the front today as for Cavendish, I had him down for a big finish maybe even a win, he always seems to have a little whine though when things don’t go his way... Hot headed youth???
As for Cancellara, not that I expected to see pulling too much, but “being the favourite” may become his standard excuse. We’ll see on Sunday eh? I have a vested interest in that one, as the sportif version is my main target for the first half of the year.

“Mijn Kinderdroom” Love it! Well, l as I think we said before, he definately earned it! As for Gomez... a lucky escape, if a broken elbow could be thought ‘lucky’... I saw it on you tube, briefly before it was pulled... OUCH!

Yes, cavendish was a bit explosive in his words - to make up for the potential exposion he was planning to unleash at the finish, i suppose. Yes, racing can be frustrating.
When is the sportif version of parijs roubaix? On the same course? Good luck!! Those cobbles are hell. I think my coach raced on those cobbles. He said that they kicked the shit out of the nicely manicured ones found on RVV.

Explosive, I remember him at the tour last year blasting the spectators at the foot of the last climb on stage 1, when it appeared that someone watching at the side of the road brought him down. Ironic that our (Britain's) only chance of a win that day should be bought down by his own fan on home soil!

The sportif is June 8th, over the same route (all pave sectors) as the professionals. Your comment about the cobbles is the second time today that someone has suggested that they are 'worse' than the Flanders streets... :( And I thought after training and racing around Antwerp last summer I had them licked...

I'll see if I can find a link to the sportif site.

thanks for the link. I'll check it out. Yes, cobbles much worse there than here. Theirs are bigger with more gaps between the cobbles. When you hit a hole caused by a missing cobble, you and your bike fall all the way in and you have to crawl your way back out. And don't even try following wheels. My coach told me funny stories about trying to follow wheels on the cobbles during that race - easy way to invite disaster on your ride.
Let me know how it goes!

Regarding cavendish seems to have a naturally outspoken personality. And when you combine it with high stress/pressure situations, I suppose he will be more apt to say things out loud that others will only think.

Just got my Cyclocross mag in the mail, and who do I see but YOU! Too bad they didn't shoot a centerfold.

Nice interview with Bart, but I cannot believe you didn't ask him "boxers or briefs?"

hey gcdavid:
I didn't have to ask bart the question. When i interviewed him, his suit said it all! haha.
And thanks for you kind words regarding a centerfold. There would be no chance in hell i could sit still for more than one millisecond without convulsing with laughter!
Although the next issue of CX magazine will include a photo of me out of my cycling kit...