not exactly cyclo-cross racing but 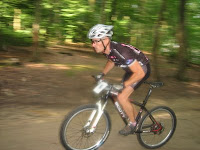 racing nonetheless. Last sunday I was part of a three-person team competing in a mountain bike relay race called 6 hours of Kortenberg. My teammies were Jonas and his brother in-law Chris. We wore the black version of the Vanderkitten kit and called ourselves the Phat Cats.

This was Jonas' first race ever, Chris just started riding a mountain bike in April, and I was under Coach Elmo's specific instructions 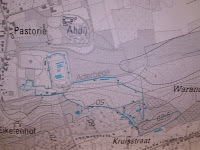 not to go over low-tempo so we were there primarily for fun with no designs on taking the gold. And fun is what we got - lots of it in fact.

We turned the "competitive" event into an all-day play date complete with friends and family joining in the festivities. It was easily over 80 degrees F so we brought the oversized umbrella from the 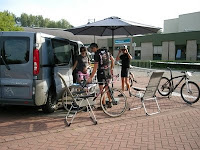 backyard and set up our picnic underneath with lawn chairs and a table filled with food such as cookies, beer, pasta and energy drinks.

The course was about 3.5km in length and included everything from fire roads, power climbs, technical descents and even a water fall (actually it was just a spray hose hung above the course that was very welcome by most of the racers to drop their body temps below boiling from Belgian's version of a heatwave.) 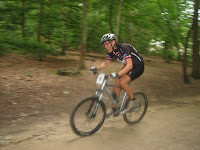 riders for the whole shot. Next it was Jonas with me last. I figured i should go last so that way when i jump on the course at low-tempo nobody will notice how slow I'm going. It turned out, though, that low-tempo on a cross bike (i used the Ahrens Whole Shot) isn't too embarassing when racing on a course that is not terribly technical. I really lucked out. 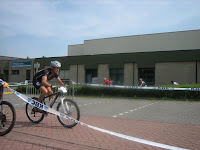 minute turns, then 1 x 30 minute turns to total 6 hours. But what we found is that it doesn't work that cleanly in a relay race. Instead we should have done it by number of laps instead of by time so the rider up next has a better idea of when to stand in the blazing sun waiting for the racing baton. We also noticed later on in the race that the other teams were taking shorter turns. Something to consider for our next attempt. 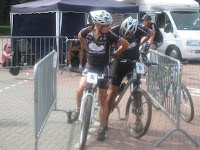 My favorite part of the race was duking it out with the Butterfly Powder Team (the other girly jersey team) that were next to us in the transition pit. We are friends with the riders so we had a race within a race with them. In lap 20 we were passed by them but we didnt fret. Our patience paid off on lap 43 - the pentultimate lap - when Jonas passed them early in the lap and put a sizeable gap on them as he pulled into the transition zone and handed me the baton. Shoot. It's one thing to race your heart out but it is completely something different when you have to do it at a low-tempo pace. It really makes you race smart. I took a little more speed into areas where it would shave a few seconds off, and chose my lines and gearing wisely.

As I was coming down the last descent, I looked over to my left at the climb and spotted the butterfly jersey charging up the hill - about 15 seconds behind me. Although nobody outside of our two teams cared that I crossed the finish line ahead of him, it still felt like a little 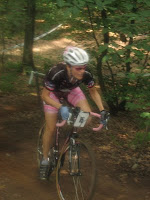 triumph for the Phat Cats. On a side note, due to a glitch in the Organization's lap counting method the Butterfly Team officially beat us but that didnt stop us from celebrating together with them after the race. We just forced them to buy the beers. haha.

It was no surprise that Jonas had the fastest average speed from our team but what surprised me was that Chris and I didnt pull him down too much at the end of the day since we finished somewhere mid-pack of all the teams - and 2nd place overall of teams with only 3 racers.

After we showered, we all went to the official post-race pasta party with life music. We even got party gifts - laundry detergent. Strange but thoughtful.

Overall it was a very pleasant experience. It was especially exciting for me to compete in a race where I can solely focus on having fun with absolutely no pressure to perform well. My coach is always joking with me about all of my lessons learned but I surely learned one from that day that i can take with me forward into cross season. If I can minimize the self-induced stress going into the upcoming cross races, I may actually have more fun - and perform better. Hey, you never know.
Posted by PEANUT at 3:26 PM

Way cool. Now I miss my mountain bike. I should go to Devil's Den and borrow Ranger Tim Scott's mountain bike and have some fun. That must have been a total blast. I have started to light the fires under my "big" bosses at work, and the head of the Lab was talking about sponsoring last years Tour de Cure for a local rider with Walmart, and he said, I don't see why we don't just give all of our support to you. So hopefully, I can get the fund raising started. You look really good on "Chocolate? or was that Coe Coe?" Anyway, your looking lethal for the upcoming season.

It's gotta be harder being a pro, being able to prioritise races as potentially each one 'pays the bills'. I always have A B and C racse, those which I am just doing as training (C's), those which I do for experience and if i'm having a good day I'll go for it (B's) and A's, which are the reason for the training in the first place. I have done 9 tri's this season and 3 long sportives. Of which 2 sportives and 1 tri are A's.

I enjoy those C's and B's so much more as there is no pressure or expectation to perform, or disappointment if you don't set a new PB or get a placing.

It's great to see the guys in the VK kit! It always looks so cool.

So laundry powder isn't the usual race packet 'trophy' but hey anything as long as it's useful! :)

hey rickie
I was on coe coe. She was more up for playing that day. Chocolate has his race face on so i had to leave him behind.
CONGRATS on the possible support from your job. Keep us updated.
Chr15: yep, you know exactly what i mean with the "fun race". too bad they dont officially judge the girly jersey category - we could have scored an extra detergent.

yeah - it starts with a harmless 6 hour race..

then you wind up doing 12 hour events...

pretty soon you will be going head to head with Wendy and Norm at the BC bike race, then Trans Rockies... not to mention Katie and Mark... and... and...

oh and who woulda thought that mysterious man in black would have ended up like this ;) congrats!

once i am done bike racing (cross and road) i think i'd rather do more fun stuff like mtb marathon races BUT as a relay, NOT solo.
You say there are 12 hr mtb relay races too? hmmmm...
And thanks on the congrats. I am lucky.

yeah but the cool thing about the BC Bike race and the Trans Rockies is the whole team aspect.

You and your team mate have to ride together and finish together (get lost together, beat the other teams together, fix mechanicals on the trail together)...

And unlike the 12 and 24 hour relay races, you get to sleep at night eat lots of kick ass food, relax with friends racing and stuff...

Peanut on a mountainbike.. now that would have been a sight to my sore eyes. Didn't you use to race mountainbikes in a distant past?

Oh, and there are 24h SOLO races too in mountainbiking. And isn't it ALL supposed to be fun?