Three glasses of wine may not take a whole evening to drink but the effects surely last that long on a post-race stomach filled only with pretzel sprigs, cookies, and a handful of pistachios. Read my after-season party report below (just posted on Cyclocross Magazine) to see how it looked through my wine-blurred vision...

A Last Race, Party and Many Goodbyes - An Oostmalle Report by Christine Vardaros
February 24th, 2009 Filed Under cyclocross news, racers, rider diary
by Christine Vardaros
“Is this your first after-season party? Do you want a drink?” While I watched his lips move, I was thinking, “Who is this guy? Am I supposed to know him? He does look familiar and he is standing next to Stybar whom thankfully I do recognize, so maybe he is a bike racer. But without jersey and helmet, they all look alike.” As he walks away to get drinks, I ask his female companion (road racer Angela Van der Velde) his name. It turns out to be Rob Peeters of

Landbouwkrediet-Colnago. Funny how everyone looks so different without their (cycling) clothes on. Either way, I was still embarrassed that I didn’t recognize one of the top cyclists in the world after screaming at him dozens of times from the sidelines. If that unassuming guy was Rob Peeters, then maybe I also knew the shirtless guy sporting ripped abs leaned against the wall with arms outstretched above him to grab hold of the speaker as the music vibrated through his body. It was after 10pm by the time we arrived - our fourth party of the evening.
(Photo of Dries Dewit and Rob Peeters)
The first was a casual gathering around female cyclocross racer Maaike Lanssens’ mobilehome 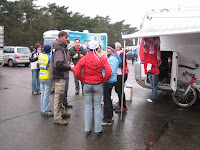 where she, her family, Danish champ Joachim Parbo, Jonas, a few others, and I drank champagne, wine, beer and ate pretzels, speculaas (spiced cookies), pistachios, chocolate and my homebaked chocolate chip cookies. Throughout our celebration, rotating folks joined us. The most famous was Marianne Vos. Every time I spend time with her I am reminded of her incredible humility - not especially common for a multiple world - and Olympic - champion. (She's the one wearing the red jacket and white hat)
The next party Jonas and I attended was held by Kevin Pauwels (Fidea) in front of his 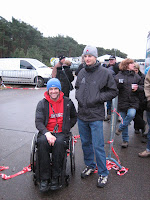 mobilehome. We met a bunch of his fans, friends, support crew, and his legendary new trainer, Marc Herremans - a former top pro triathlete (pictured in photo with Kevin). After a drink and a (very) quick interview, we swung back to Maaike’s camper but only for a moment as the champagne was running thin. Instead, we relocated our group to the party tent set up at the finish line where we could keep the liquids coming. Inside the tent were easily over a thousand party-goers consisting of both racers and spectators letting loose after a long season. There was a bar on one side and a DJ on the other, while most of the tent was filled with little round tables for setting drinks. Standing room only. The music was a mix of pop rock that spanned the decades and Belgian music, both contemporary and folk-style where most of the crowd sang along at the top of their lungs. We 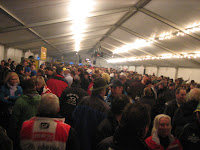 drank, danced, talked (or rather yelled as it was very loud inside the tent), and laughed so hard my abs hurt. 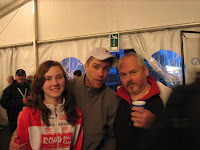 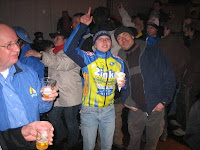 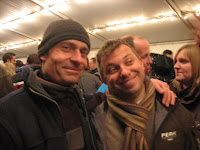 (Maaike is in Yellow/blue jersey with Jonas; Femke - Maaike's sister wearing red/white jersey - and their dad is pictured with Joachim; Ben Berden - Elite w/o contract Belgian Champ wearing red/brown flannel shirt and cap; jonas hugging David Van Ermen And when it was time to depart, we cried. For five months, we were one big extended family, spending time with each other a few times per week. When time was up, it was emotional to say goodbye to folks whom you will most likely not see for 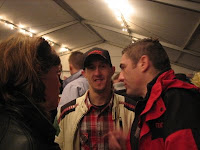 another seven months. I felt it a little in America but here it is so much more intense. Belgium’s season is two months longer, giving us more time to get into a routine of being in each other’s constant company. And the “family” is much larger since all racers AND supporters located in this densely cx-populated (mostly within a two-hour drive) area go to the same events. We’re not split up as in America where, 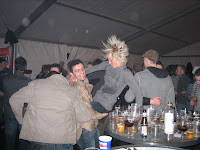 aside from a few select events, the cx communities don’t cross paths. I was in the NorCal group. 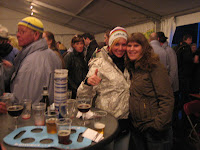 After shedding a few tears, Joachim, Jonas and I drove over to the neighboring town of Westmalle for the final event. As soon as we walked in, Jonas and I walked right back out. It must have been 85°F in there, sweating bodies packed in there like sardines all sticking to each other. After stripping our thermals off in the van, we gave it another go - still overdressed but not committed to ripping our shirts off like that one guy who was impressing the speaker with his slinky moves. We set up at a table with Nikki Harris and mutual friend Jos Ryan, got Westmalle Trappiste beer (when in Westmalle…) then roamed the joint.
I’m sure I was surrounded by “this name” and “that name” but without their usual outfits, I was lost. I could only make out a few. Of all the happenings at the bar, the most interesting was watching the dancers’ reactions to the music. Every twenty seconds, the DJ would change the song to one with a different beat, resulting in a rampant spread of “two left feet” syndrome. If you think watching just one bad dancer is funny, you’d have really enjoyed the show.
When it came time to go, Jonas and I took the party atmosphere with us for the drive home. We thoroughly finished off our already strained voices by loudly singing (or in our case screaming) along to random songs on the radio such as “Viva La Vida” by Coldplay and “Mr Brightside” by The Killers. 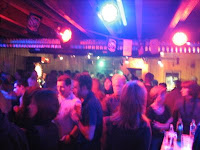 As for the actual racing, I really enjoyed the course. It was basically a technical road race, where much of the loop was hard-packed dirt trails that weaved through the woods, while the sections in the open areas were layered with mostly rideable sand. What made the race most special for me was hearing a steady stream of cheers - for me personally! I was quite moved by the show of affection. My result that day may not have made me feel special but the fans more than made up for it. I finished the race with a wide smile and a tear of gratitude in my eye. Sure I wish I would have ended the season with a superb result but frankly my thoughts were already on next season. It’s only seven months away. And you know how time flies when you’re having fun…with the spring classics right around the corner and the grand tours on their heels, cyclocross is only a click of the helmet strap away.
Thanks for reading and following me this season!
Posted by PEANUT at 12:02 AM

Funny (or not?) that a "confessed doper" like Ben Berden is still welcome at the party. On a sadder note, I read that French top mountainbiker Christophe Dupouey - also convicted for doping - took his own life , leaving behind his kid (wife already left him I believe)

Partying is like training and racing, it's all about hydration and NUTRITION...

I hear ya on eth people without there cycling clothes. I met (and rode with) a guy last month on a sportive at the end he went off to get us both some food and drink, a guy came over a few minutes later with coffee and sandwiches etc, I hadn't a clue who he was despite riding with him for the past 5 hours! Put you helmet back on and glasses, oh yeah I know you!

The parties sound awesome, so many names! A great way to say say good bye til next season for everyone and see a different side to people after competing against them all winter.

Marc Herremans is a Triathlon legend, up there with the Hoyts! I have met him breifly a couple of times when I have been in Belgium for Half Ironman Antwerp, which bears his name!

hey bbw
That is too bad about Christophe. But regarding confessed dopers, I dont really have much of an opinion since i have no idea what their individual lives are like and what led them to use drugs. I do feel for them as well as other athletes who have not yet been caught though because they must be torn with themselves every day of their lives - the current ones, since in the past almost all took something from what i hear.
And chris:
Thanks too for the comments. Marc was a very friendly guy. he would possibly make an excellent interview for cxmag. what do you thnk?

You know I think Marc Herreman's would make a great interview for CXmag. Some might not see that connection straight away but I certainly would love to see that. As a an athlete, as an AWAD, as a Belgian and as a Coach. I'm sure he would have a great insight!

Oh yeah and I forgot to say thank you to you for sharing with us this season :)

THanks for thanking me Chris! And i will run him by cx mag to see if they approve. I assume awad is some sort of "athlete with disability"? I think i would rather focus mainly on his amazing coaching skills and if he feels it is relevant, he can bring it up.

Good point! From [i'm sure not only] ] Triathlon point of view, the inspiration side of Marc's story is what gripped me... The ironman thing is to overcome your own adversity, whatever it is. Mine pales into mandane insignificance and yet I still can't overcome it. He inspires alot of us. And inspiration is a great coaching tool.

I would love to hear about his coaching and also about 'cross from a triathlete's point of view. And maybe about his foundation?