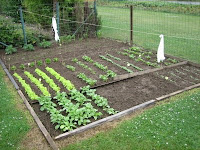 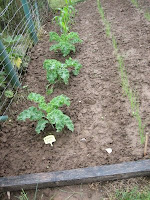 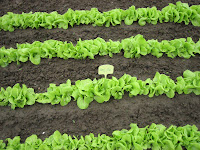 Less than a month ago, we planted a garden in the backyard. But 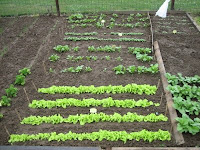 shortly after looking at other gardens in the area, i quickly realized that starting most of it from seeds may not work considering everyone else's veggies were as high as an elephant's eye.
Even if we were off the back in planting the garden, it finally GREW. The first two weeks almost nothing happened, but once the rain came it just took off! So far only the radishes are ready but fingers crossed that the rest will be edible before the weather turns for the worse. Here in Belgium you never know when that could happen.
As for my ride today, we went out for an organized bike tour of 125km. I expected the ride to be relatively easy but after the first two kilometers, my hub had other plans. It decided that if i stop pedaling to coast, it will blow up. So the next 123km was constant pedaling. High speed turns were the trickiest. After the ride, my legs were so sore I had to ascend the stairs to the bathroom on hands and knees. Humbling.
Next race is this Wednesday in Arendonk - many towns away. I have a feeling the next days will be easy on the bike so they are well rested to be tortured again.
Thanks for reading!
Posted by PEANUT at 6:26 PM

what does thinning mean?

The garden looks GREAT!!! When can I come over for a salad? Good luck in Arendonk on Wednesday - I'll check back to see how you did!

We start picking the lettuces before they are traditionally ready, and hence thin the rows to allow the remainder to mature and grow better... they still taste delicious, infact you can add the seedlings to salads or use as a garnish.

But the veggie garden looks awesome! The Kale especially looks good. You can also start taking the leaves from that, it will keep growing (just don't strip the plant bare), it will actually keep going right through winter.

Have a great race today :)

What a great garden! Wish I had more land. Small yards here in Chicago! I have been eating a raw vegan diet and have dropped a lot of excess weight and will soon be entering races as well.

Your garden is making me hungry. Looks really good. As always, your an inspiration. Say a big hello to jonas.
rickie

you have a garden but don't know about thinning?

here - stolen from somewhere on the internet...
""Thinning" is not moving them apart, it is choosing the strongest plant.
Have you ever bought a 6-pack of vegetable seedlings, and noticed that one or two grow huge and threaten to take over the garden, one limps along and never amounts to much, and the rest behave somewhere in-between? Seeds produce plants that are genetically different (in small ways), so each one responds differently to its microclimate in your garden.

When you (over)plant seeds, you are making sure that some of them survive and thrive, and playing a statistical game that assumes one out of every 4 or 5 in a given spot will be that extra-strong plant. You remove the competition when the plants are young to give the chosen plant a better chance.

The best way to thin is to cut (with a fine-tipped set of shears) the weakest plants in the bunch. That ensures that you do not disturb the roots of the plants you want to keep. It's meant to be a time-saver, so that you need plant a given space only once and do not end up with empty spaces where seeds did not germinate or were weak.

Of course, if you are growing a plant that you know tolerates root disturbance, you can try to separate and plant out each tiny seedling (I've done it successfully with basil and some native plants), but it is rather tedious and worth doing only if your eventual planting space is not available when you want to plant the seeds. For instance, you can plant a handful of seeds in a pot, and then in a few weeks when they are big enough to transplant, transfer them to the garden.

And by the way, test it for yourself by doing some test plots with some carrot or lettuce seeds: plant some at the final spacing, and plant some at the recommended (to be thinnned later) spacing. In the recommended spacing area, leave some plants to fight it out on their own, and thin the others as recommended. Pull some out by the roots, and cut some at soil level. See if there is a significant difference (in yields, vigor, or health of the plants). See if you prefer one way or another."

Thanks for all the comments! Congrats jim on losing a lot of excess weight on a raw vegan diet. Best of luck in the races! Thanks gewilli for your detailed description on thinning. i just thinned it out and ate all the "thinnings" in a grilled ciabatta with avocado, various lettuces, thin slices of cucumber, onion and tomatoes from the neighbor's yard, and veganaise. Thinning rocks! haha

I just wanted to make sure you received my birthday greeting yesterday. Not having heard back, I'm assuming you made a nice holiday of it, or remained beneath the comforter all day, as I would do!
-- E.C. Chamberlaine