"Fireworks canceled" The cartoon was in response to the fireworks 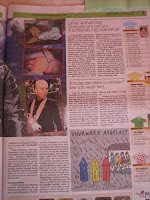 expected in the high mountains, only for the top GC's to conservatively hold their places in the GC line.
Top story: Lance Armstrong is quoted as saying that doping control at 6am is not humane. He claims it was the French Anti-doping agency's political game.
The king Alberto cartoon is pretty self 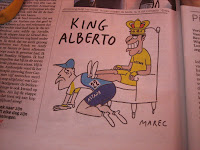 explanatory. I started to like Contador until his final podium appearance when he completely DID NOT thank his team and support crew for getting him onto the podium. 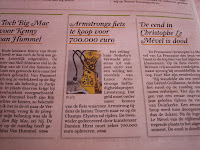 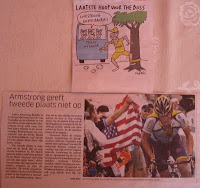 "Last hope for the boss." The livestrong anklebands was a nice touch. My favorite of all the Tour titles in the newspaper was "'The BOSS is BOOS'" which means "The boss is angry". I love how creative the Belgians are with their wordplay. Belgians seem to play with words much more than americans.
"Armstrong doesn't give up 2nd place" - he surely did fight, or rather struggle, for it too. He is definitely not the Armstrong of years past. hmmm...... 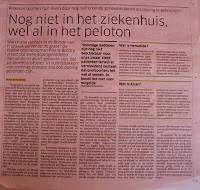 Speaking of...there are two new drugs on the market. I am particularly impressed with the second one called Aicar. They tested it on runners and apparently if you take it for four weeks - WITHOUT exercising - you can run Apparently, if you take the pills for one month WITHOUT exercise, at the end of the month you can run 23% longer than four weeks ago and have 44% more endurance - according to studies done on lab mice in La Jolla, California. The article went on to say that to have better condition without exercising is everyone's sexual fantasy, surely that of the topsporters. The drug is not yet on the market so dont bother looking for it in your nearest pharmacy. Personally, i just dont see 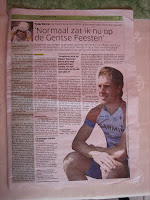 how something so effective in cheating a daily regimen of a healthful diet and exercise can be good for you.
In many of the stages, if you look just behind sprinter Mark Cavendish who won every "sprinter" stage and even some non-sprinter stages, you'd see America's Tyler Farrar, or should i say America's AND Belgium's. The Belgians have readily accepted Gent-based Farrar as one of their own. His fluency in Flemish really won them over! The title of this profile article says, " Normally i'd be at the Gent festival now." He does say later on in the article that "The Tour is also not bad."
What i admire most about his Flemish is his confidence to talk without stressing over words he doesnt know or over making mistakes. When he doesnt know a word, he just plugs in the english equivalent and keeps on going! Excellent!!!

Every day while the Tour was going on, the Belgian newspaper Het Nieuwsblad was running the daily stories 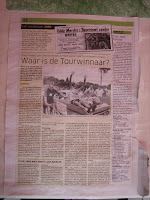 from the 1969 Tour de France. This story is titled, "Where is the tour winner?" Apparently Eddy Merckx was left behind at the post-Tour party in Paris. His team forgot him. They finally found him after an hour of searching.
Next are photos of post-tour crits (my races as well as the boys) and even one of Sven Nys. Stay tuned...
Posted by PEANUT at 5:36 PM

Another enjoyable read. I too was a little annoyed at the after Tour un sportsman like conduct. It will really be interesting when all the lab work comes back from the Tour. Speaking of lab work, got some lab work done today and I have a complete exam Friday. Hopefully nothing serious, but was feeling poor enough at times it frightened me. Nemo is getting all Glamoured up for the Tour De Cure. This year will be very hilly. But she is ready!

We get a few column inches dedicated to cycling in the British press, despite the successes of Cav and Wiggins this time around!

Some funny stuff there, i guess the Contador/Armstrong thing is amunition for sending up! i loved the photo's on the podium in Paris, for whetever reason Armstrong's face was a picture!

Have a great weekend!

Great article, Peanut. I think Lance did well, all things considered.
Admittedly I wasn't expecting him in the top 3 of the TdF to be honest when I read about his return half a year ago, but it must be said, he did do very well indeed.

speaking of contador and armstrong, contador just did a local criterium here in belgium a couple of days ago and won. he was paid 50,000€ to start. And at yesterdays criterium, there was a guy in the elite without contract criterium fully kitted in Livestrong clothes and bike but about 30kg heavier than armstrong. he got dropped by the peloton in the third of forty laps. Is that living strong?