Wanna know what I've been up to?

I am typing this in between sending out 'business' emails, doing 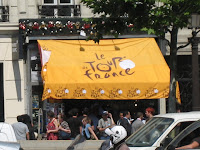 laundry, packing for this evening's race, and working on Sven Nys' interview so it will be a little short and probably scattered.

In the last few days since my last post, I 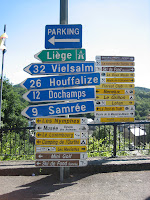 have raced twice, gone to Paris for the day, picnic'd in La Roche en Ardenne, took a train ride (a very short one) in Durbuy - the smallest town in the world, shopped for food, hosted a wedding reception, ripped my rear deraileur off, and celebrated my birthday. 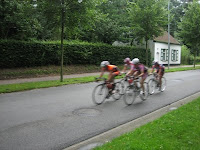 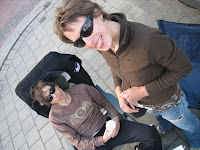 The photos on this post are from the race on my birthday July 19th. Julie drove with us because it was her birthday too! It was a very fun day on the bikes; we sung, we attacked, we were in 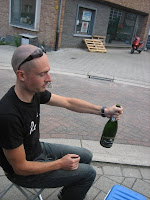 breaks that we instigated and we had champagne afterwards. Good day.

The second race I did which was three days ago didn't last long enough to take photos. Four minutes into the event my chain got caught between the frame and small chainring. Sara Carrigan of Lotto-Belisol was kind enough to push me forever in hopes that i could fix it on the fly but no such luck. I finally 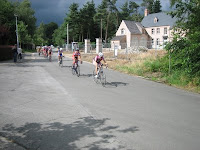 stopped and took some time to pull it out. As i tried to chase back onto the peloton I quickly found out that i had NOT ONE single gear that didn't skip. With no way to put full power on the pedals I had no hope of rejoining the peloton. And even if i 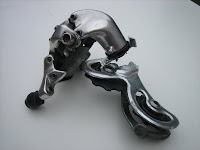 did, I'd be seriously putting myself in danger of injury from trying to ride a bike that is skipping. After riding about 10km dangling just behind the peloton while trying to baby the pedals, my deraileur decided it had enough and ripped off the bike.

OK gotta go - I will write more soon. Mom leaves on tuesday so i should be able to write more regularly after that.
Posted by PEANUT at 11:33 AM

Hey, you don't look overly happy on that pic with Julie..
Happy birthday anyways.. I had mine 5 days before you did :)

You girls look like sisters and even twin sisters at that. You may want to have that back derailer looked at as it may need some adjustment. Sounds like you have been keeping busy and out of trouble. My best friend Toni is moving to Florida and we got to ride together one last time. We both approached a light on a small hill and I knew she wasn't going to catch the light and I thought she needed to gear down. Well she did'nt make the light and was in too high of a gear and then couldn't get out of her pedal and did a slow motion fall over at the light. She was totally ok and after realizing she was fine, we both tried to go after the light. We both were laughing so hard we could hardly go. The people in the cars watching us didn't know what to think, but it was really funny. Toni is such an incredible athelete and like I said, my best friend. She will be missed. Be careful out there. I'm glad you weren't hurt.

Hey Christine,
If you have a larger version of the picture of you with one leg over your cross bike under the caption, dirty peanut, I should would love a copy. You have my email.
rickie
found a new route yesterday, and I will ride early in cool air tomorrow. Road 40 in the heat and it is so hot, it is dangerous. Got to hydrate.