I haven't written much lately because i am still in racing hell. As of this 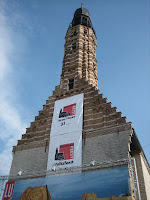 sunday i will have raced 9 races in 12 days. That alone is not a feat but when combined with my other multitasking activities it makes it impressive - or at least explains away a little of my flakiness for not updating my blog in a timely manner.

This week has been post-Tour (de France) criteriums. For many of them there is a womens elite race just before the mens spectacle, which is exactly what it is. While the women race it out no-frills style - no parade, no pre-arranged finish, no podium girls, the men's event starts off with a caravan of convertibles containing the crowd favorites like Cavendish, Boonen, Gilbert sitting in the back seat flanked by sexy long-legged bikini babes. Next the guys ride around the criterium track for a few laps at an almost trackstand pace, slapping hands with their fans and happily responding to the fans who yell random encouraging 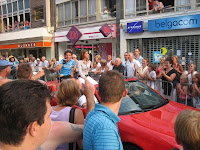 Finally it's race time. Last night's crit in Herentals, Belgium was the only mens crit I got to see this season. For the first many laps of 50, the guys take turns showing their faces off the front of the peloton. First it was cyclo-cross stud Bart Wellens taking a flyer for a few laps while the rest of the peloton pretended to grimace in pain. Next flyers came from the local favorites racing for Belgian clubs, then some of the other big pros went for a front seat "hello" to the crowd. Finally after about 40ish laps, Cavendish, Gilbert and Boonen were off the front - clearly the three chosen for the podium placings. With two laps to go, Boonen dropped them. But within a lap he was caught and Cavendish flew through for the win with Boonen and Gilbert behind - in that order. 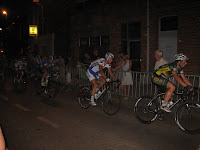 The first 40 laps looked fast but when they hit the 45-lap mark and the pace went up to something closer to reality, it was very impressive - almost surreal to see cyclists moving that fast.

Compared to the mens race, ours must have seemed quite ordinary to the crowd. But to me it was much more interesting. This is partly because i was riding on a borrowed bike that was one size too small and only ridden by me for a whopping 15 minutes before the start. 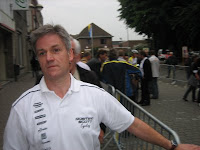 The night before the race, just after returning home from a race in Chaam, Holland (which was a fast race, by the way - we finished 60km in only 1hr 10min), Jonas found a crack in my frame. So that night we stripped the bike down in hopes of getting another frame by the morning so i can make the afternoon race.

Jan from Fietsen Goeman (photo right) in Everberg thankfully called Scott Headquarters in Belgium in the morning and they had a frame in stock. Unfortunately by the time we could get the frame 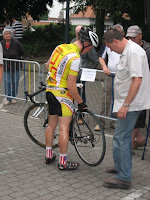 there would be no time to build it up so Eddy at Scott (his is the one talking to the Scott rider) graciously lent me a bike to race for the next three events. What a godsend!!! Not only was it in perfect race condition (although a bit too small to race on all season) but it was the top of the line Scott Carbon CR1 bike equipped with full carbon campagnolo record - even carbon cranks. What a luxury.

I was nervous about racing with it, firstly because it is a very expensive bike - my guess maybe worth 4000 euros?, and secondly because i was not sure if it would be comfortable enough 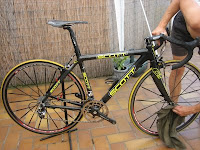 to ride at 40-50kph in a tight group through hundreds of high speed turns, some of which are on cobbles. But 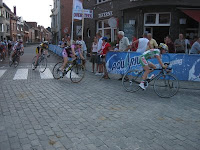 the bike proved excellent. Wow - it was the most comfortable ride i've ever felt from a road bike. I used to think that road bikes are all the same (while cross bikes are NOT) but now my mind is changed for sure.

Anyway, i didn't win the race but i surely showed my face a bunch at the front of the race. And most importantly i had a blast doing it.

Today has been spent writing, writing and 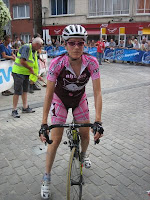 writing. Tomorrow it is back at the races. Just two more races then i am off for a mini 3-day holiday without the bike. I guess it's time to blow the 1-inch dust off the running shoes since i'll be using them shortly to get ready for cyclo-cross season. Just can't wait.
Posted by PEANUT at 11:43 PM

Wow, the CR1 was my first pick for a dream bike until I decided to go the more affordable route and build my Viner piece by piece. What an impressive machine. I still love my bike, Nemo, but the scott is pretty sweet. I'm wondering if you could actually put some thinner road tire slicks on one of your cross bikes and do the road races. They shouldn't be that radically different except for the gearing which could be altered. Your original scott was Aluminum wasn't it? The carbon fiber must have been sweet. Talk to you soon. I need to get to bed as I am doing a long ride tomorrow early before the heat. I found a cool new route.
Rickie

Christine, I just love your blog. The pictures are great. Love the socks! I am going to do the tour de cure here in Northwest Arkansas in October. I will be setting up a web site to raise money which is the purpose of the whole deal and to raise awareness about Diabetes. My former step daughter, Casie has diabetes, so it means a little more. I will be doing the 100 mile ride. I will send you the link when I get it together.
Rickie

hey rickie
How was the new bike route? yes the cr1 was excellent. I just raced a road race yesterday and another criterium on it today. Thankfully no crashes so the bike survived! How nervewracking is it to not only be on a borrowed bike but one that costs more money than i can afford to spend!
Now on to running.

It is like I was telling my Dad, hey dad, my new bike cost more than my car! I will do a blog on my newest route and send you the link to my blog when I get it done. I am in the middle of my factory work week, so it will be thursday before that happens, but it will give you a chance to see what I see. Enjoy that carbon while you can!
Rickie

Not surprised you are tired though 9 races in 12days... Your 'flakiness' is excused :). Not much time for resting but hey, all that intensity must be doing some good, right?

The Cavandish, Boonen, Gilbert race sounds fun if a little preordained for the crowds(really???). You'd have thought that given their standing they should be have to duke it out with the field! Its hard to imagine how fast those guys are going in a crit race, especially when you, as a pro yourself, comment!

your backup at Scott sound like a great team, to get you a bike to race ther and then to ensure you don't miss a race is awesome! and boy does that CR-1 look purdy! Not sure about carbon for me though, 4k's is a lot of hours at the desk for my (little) overweight a$$ to go and break! Maybe Jonas can be a little 'slow' in building up the new frame when it comes so you can continue on the loan bike for a while :)

Good work on RACING on it and getting to do some work at the front! your descriptions are certainly a great endorsement for the bike!

Now enjoy your break, as those running shoes are calling!

I have been running all year, now to add some intensity work! I hope to move up from 'back of packer' this year...

rickie
i have never owned a car but if i did I'm sure my bike would cost more than the car too. Funny thought, huh.
chr15
i surely did like racing on the bike. I am sorry to see it go but do look forward to my replacement bike arriving so i can re-sticker it with all fun stickers - and sponsor stickers of course.
Keep me updated on your cx season.