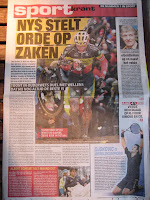 Immediately after Niels Albert crashed while warming up for Gavere Superprestige, a doctor at the race site did an initial exam and said that he will be ready to start the race.But then they called the team doctor and when he heard that Niels had a hard spot under his ribs, he said for him not to race and to bring him to hospital for a checkup.In the university hospital of Gent they saw that he tore his spleen.

He was to spend the next 24 hours in intensive care where they keep an eye on the bleeding to see if it stops. Albert was good this morning but then the pain became worse and by 4:30pm today he felt bad. There is still fluid and that gives pressure in his diaphragm and a lot of pain in his chest and his back. The spleen still has to recover which takes a few days. His stay in the Intensive Care Unit will be extended a little more. His state of mind is not too bad according to the manager. Of course this is a devastation to his season plans but he is already making new goals. Today he said he will aim for the championships.

After his stay in ICU, he will be five more days in hospital closer to his home for observation.Then he is off his bike for at least one week. After those two weeks, he will need another two weeks to get his fitness level back up.

Palmans Cras Team Manager Christoph Roodhooft said, "All this is a serious glitch in his racing plans. He can give up all the rankings GVA, Superprestige, and World Cup. I think Niels doesn t realize so far that everything is lost for this season but at this moment we focus on the next 24 hours and we hope that nothing untoward happens. We want to avoid, in every case, a surgery. Best case it will take four weeks before he can ride another race. we will have to change our plans and aim for the championships."
Posted by PEANUT at 10:47 PM

Sounds very serious. Good thing the team doctor made him go to the hospital. Sounds life and death to me personally and I would think the young man's well being would be the thing to be appreciated. Best of luck to him and his family. My brother sat up for an entire hour and 15 minutes today in ICU and was able to eat a couple of bites of pureed food. He even brushed his teeth and help the nurses wash his hair. He is still very foggy and a little slurred, and confused sometimes because of his sodium levels, but he is progressing well and no more bleeding. He is many miles away, but I get daily updates. When I am having a bad day, like today, I am uplifted by his courage.
Blessings to you all!
rickie

Glad to hear that Niels is making a recovery. I tried to find some more news (in English) but it was pretty scarce. I can't help but feel that I jinxed him.

Rickie, glad to hear that your bro is doing well. Best wishes for continued progress.

Tough luck for the upcoming youngster.. it will teach him not to say bad things about roadies :)
seriously, he was lucky to get away with it (the injury) and should be out for a month only. Offroad racing is dangerous isn't it

I heard Christian Prudhomme put a stick in his spokes.

JK. Poor guy, sounds awful. Slap bang in the middle of such a great season for him. I wish him a speedy recovery, if possible sans surgery.

Thanks for the update Christine

Thanks to you too Rickie for the update on your Brother. Onwards and upwards :) good news.