I am now in the middle of the season-to-offseason transition where my routine goes from race-day-centered to a more balanced form of living where i get to catch up on projects long ignored, make a little time for socializing and be a bit more flexible in my riding. Although i love incorporating more balance into my life, it is always a wierd two-week period where i re-train myself to leg go of my obsessive focus on race day. Rides are the funniest during this period since half the ride is spent wanting to ride hard and the other half I am wanting to stop and picnic on a sunny patch of grass alongside the trail. Motivation erratically swings to both extremes.

On the mornings when motivation is really lacking even though i know i will feel better on the ride, i trick myself to start the day by committing to baking tasty treats like pancakes, scones, cinna-buns. Since my last race i have made pancakes once and scones onces - so basically i have ridden twice.
On the first ride, with Jonas, Chris - his brother-in-law, and son Lukas (sporting his tom boonen world champ jersey), I was so unmotivated to ride that i was dropped two kilometers into the ride. Lukas is eight years old. But then after the first thirty minutes, i was ready to take the speed up.
The second ride this week was with the "old men". My body again flipped between the motivation extremes. Part of the ride, i held back the urge to go to the front and push the pace, while the other part was spent wishing the wind was less and the pace was slower. Oddly enough, it dawned on me during this second ride that the times my mind is set on "riding for fun" is when i ride the strongest. And when i was dropped by an eight-year old it was when my mind was focused on "training to race". Now if i can switch my mind onto the "riding for fun" setting permanently...it works for World Champ Marianne Vos.
Aside from the little rides, I've been going to therapy where they are rebuilding my quads and neck. At the visit yesterday, i showed marked improvement! yippee! Still a long way to go but finally in the right direction. 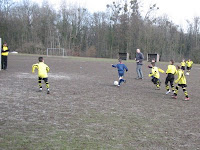 I've also had a little time to socialize. Yesterday we had lunch at Amy's house - soup, a spread of hummus and veggies for build-your-own-sandwiches, and blueberry bundt cake - yum! We also got to see Lukas play soccer. There are few event more entertaining than to watch little kids play sports. Wherever the ball went, twelve little feet followed. Unfortunately for Lukas, the other team was heaps better. The final score must have been about 30-1, with our very own Lukas scoring the solitary goal. His dad, grandparents, brother, Jonas and I were all on hand to see the elated yet confused look on his face when he turned to us after the ball went in. 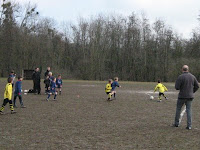 We were supposed to go to one other party last night at Jonathan Page's house but Jonas had to go to work. Bummer.
Tomorrow is mountain bike tour day. We are doing the 50km (30mile) loop. They expect at least 2500 riders since it is expected to be 14°C (57°F) AND sunny - a rarity for Belgium this time of year. I would blame it on global warming but our winter was crap - freezing cold. Waffles with maple syrup for breakfast.
Thanks for reading.
Posted by PEANUT at 5:05 PM

It was so nice that you guys stopped by on Friday - I always enjoy getting together with you! Hope Jonas made it to work in time! Enjoy the sun today - looks like it might be the last for a few days, anyway.

I've been reading your blog and I love it! I'm wondering if I can pick your brain on something related to living, training and being vegan in Europe. Would you mind dropping me a line at rachelnelson1@gmail.com?

Balance must be hard to find during your transition period, if not only because 'riding for a living' is what you do and you can't loose sight of that but, also that you need a break/fun and renew your freshness.

Sounds like you are doing a great job at it though!

The party at JP's house is to related to 'work', for the offseason, anyway.