A weekend of riding...

it doesnt get better than that. OK, well maybe a little better if it included my home baked

chocolate chip cookies and a few more of my friends!
(top photo taken by Krist Vanmelle, photo below taken by Hugo De Spiegelaere)

It started off with a race in Lille, Belgium on saturday. The course was a lot of fun - a heavy one with lots of sand, mud, undulating twisty singletrack, flyovers and thousands of fans lining the trail. Before the race started, newly crowned world champion Marianne Vos and i rode up and down the straightaway together to keep our legs moving. And just as we approached the far end of the course, a group of fans started going crazy with their enthusiastic cheers. But when they continued their cheers after Marianne had already made a u-turn back to the start line, I instantly realized they were for ME! I was so overwhelmed with excitement and humility - what a warm welcome. They were the same guys who cheered for me at a few other races this year - my very own small but extremely vocal fan club! Next year i have to make hats or something so i can get them to these guys!! That would be so cool.

The race unfortunately did not go as well as my warmup though. Within the first ten seconds of the race, I was almost last. Shoot. By the time i clawed my way back through the tail end of the race the front end was long gone. And if it couldnt get any worse, every sand section turned into a time loss for me. In my haste to get to the front, I tried riding every sand section even when (in hindsight i now see) it was faster to run. But even so, i still managed a 12th place which makes me pleased. (for my full report, go to THIS LINK on CX Magazine)

After we got back home, I unpacked, showered and did the laundry while Jonas kept busy 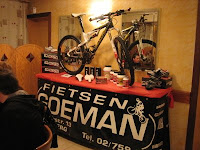 washing my bikes. At the moment when we were done with our chores, it was time to walk over to the Team Goeman Presentation in town. We sat with the parents of team owner Jan Goeman and my friend Ronny. It was four solid hours of speaking 90% dutch 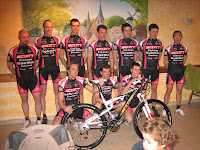 since his parents dont speak a word of english. Luckily they served wine to help me through the evening. Even though I only 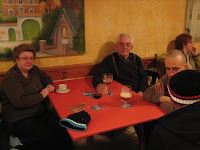 had two modestly-sized glasses, it was enough for me to pretend to be fluent - or at least enough to be in 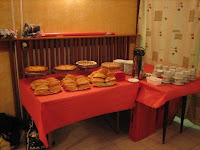 denial of my lack of fluency. Surely the latter but it was fun anyway.

The most challenging was actually trying to understand them since they are from Ninove, an area west of Aalst - direction "unintelligable" 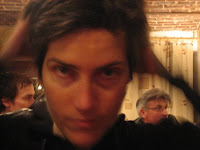 where the dialect is so strong that even native Flemish speakers have to really pay attention to understand most of what they say. I did understand, however, their compliments on my language improvement! Or at least i think that is what they said.

Afterwards, jonas and i headed to his favorite place to visit when buzzed - the local youth club. There he had a couple more pintjes to top off his multiple Duvel beers while i had a water to recover from my wine hangover. While we sat there, I quietly gave thanks to Jonas' parents for speaking such clear Flemish. You never realize how much effort goes into living in a place where English is not the primary language until you're doing it. I cant even watch a Simpsons episode without it turning into homework where i study the subtitles to make sense of where the verbs, nouns, adjectives, etc go in a sentence - not to mention learning new words. I have learned a lot from sitcoms here which makes me better at reading and writing but saying the words out loud still earns me much laughter. Work in progress...

It may have been a later evening than planned, but the 7am wakeup call the next morning remained unchanged. We needed to get up early to ride a 65km mountain bike tour along with a couple thousand other folks and return home in time for Jonas to go to work.

The first 20km were lightning fast, we were both feeling good. I was on adrenalin from racing

the day previous while I swear Jonas was still drunk in the morning and fueled by his buzz. By KM 30 we were crawling. Jonas apoligized a few times for riding slowly. What he doesnt know is that i was dying too. And to rub it in, some guy passed me at KM 45 and said, "Is that the best you can do?" Two KM later another older guy rode up to me and said that this was a heavy course and that his legs were tired. Two seconds later he rode away. The race from the day previous took more out of me than i realized.

64 we passed the camera woman taking shots for the website. I tried to smile but i have a feeling i was only smiling in my mind since my mouth was frozen, thus requiring too much energy to move the lips.

We got home just in time to watch Hoogstraten Cyclo-Cross race on TV. With our legs elevated, we sat down to a feast of pasta and garlic bread. Unfortunately fifteen minutes into the race, Jonas had to go to work until 1am. And about five minutes after he left, i passed out on the couch with the race playing in my dreams. Nys won - yippee!
Posted by PEANUT at 9:59 PM

...glad ya had a decent race & having your own flandrian fan club is pretty damn cool...

...put my e-address in whatever communication device you use & shoot me a quick 'e' when your stateside, marin style...always cool to put a face w/ a name but i actually think yer gonna go "oh my god, so yer bikesgonewild...i do recognize ya !!!"...
...i'm kinda one of the old school cycling fixtures in marin...

...stuff like "yer gonna..." is intentional but the real mistakes kill me...

Yes, looking at your photo I do recognize you. And yes, i will let you know when i am in town. dates are 25 march - 8 april i think.

oops. i didnt catch your mistake but now that you pointed it out...

Nice work on the fan club. Some 'peanut fan club' teashirt prints would be great for next season. I've seen some if the Sven Nys ones! then you'll be able to spot the Vos fans from the Vardaros fans a mile off. Brilliant, you have fans who aren't trackside too!

Was this the race that mentioned you on one of the bulletin's earlier in the season?

Although you say the race dodn't go as planned it seems as though you fought courageously to hang on and clawed your way up the field!

Sounds like a very cool weekend, a pro race on Saturday and fun ride on Sunday, finished off with a few drinks and freinds... you are right, it doesn't get much better than that!

PS BGW's 'deliberate' grammar mistake just put him out of the running for dating Liz Hatch.

hey chr
yes, the same race that pre-advertised me. Regarding the grammar thing, I seem to be bothered only by bad grammar when it comes from people who pretend to have mastered it.

...yep...even 35 or more years after that foto was taken, i still kinda look the same...definitely heavier but still recognize-edly the same, i've been told...
...(it is about the bike, lance...keeps one young in mind & body...just sayin')...

...chr15 tree...despite all those sordid stories (sheesh, i'm kidding, honest or gosh, at least i hope), i am actually capable of appreciating & encouraging young women cyclists in their endeavors, despite my having grammatically eliminated myself from the "hatch sweepstakes"...

Hey Christine,
Again, congratulations on the 12th placing. Just got through watching the world cup cyclo cross championship video. Wow, it blows me away the level of intensity from the get go. Total anarobic right from the start and the different technical sections and speed. I don't see how you do it. Also, the mechanical side of the sport must be extreme as well. I can see why you love it so. Personally, I would die as I remember racing Mountain Bikes. Anyway, was thinking about you and jonas after watching the video and decided to say hello.
Rickie

I seem to be unable to master anything... especially grammar...

as witnessed by my attrocious spelling... teashirt??? dodn't???

What always amazes me is some foreigners with a better grasp of the English accent than some English people...

Have a great weekend.

hey rickie
THanks for thinking of us! i have been super busy this week so sorry i havent had any interesting stories to write about this week!!
Hey chr
i agree with you on the foreigners who master english. jonas is a good example. he tells me he doesnt speak english but then he continues to explain why using perfect grammar.

hey bgw
goed gedaan - although the "gone' translation part of your name has a different meaning.
Flemish and Dutch are mainly the same. Some words are different and some phrases are more common there than here. But the pronunciation really separates the two. There are various dialects throughout the flemish belgian region but hearing hollanders speak is altogether something different - sort of like a gutteral, round sound if that can make sense. Also they pronounce all the letters in words, especially the ends of words, while belgians often cut off the last letter. but they do not cut off half the word as they do in France!
Hope that helps. Tot volgende keer!

...& although it's a stretch & there's probably two different versions, how would a good dutchman & a true hardcore vlaamse cyclist write "bikesgonewild"...

...i've got dutch & welsh (& german, but i don't wanna go there) in my background...yet as a serious cyclist, i qualify as both an honorary flandrian & italian...