In the news - some of it shameless self promotion...

I just came across some quotes on dailypeloton.com by my favorite race promoter (Sorry Steve Litvin, you don't count because you're retired from organizing events) Myles Romanow discussing the disparity in prize money between men and women in cross races. He runs the Whitmore’s Landscaping Super Cross Cup and has ALWAYS made it a point to treat women like superheroes with the respect that they deserve while backing it up with equal prize money to that of men. AND both categories are always paid WELL ABOVE the UCI minimum payout requirement. According to UCI, the womens' payout should be $800 per race but Myles payed out $3230 per day. Thanks Myles!!!

Here's his quote: “The area we live in is pretty into minority rights,” says Romanow. “And quite frankly, I’ve always personally believed that Katie Compton and Lyne Bessette should be racing longer than a 15 year-old Belgian teenager. And they should be racing for the same prize money as men, or maybe one lap less than the boys and perhaps prorate the prize list accordingly. The point is, $800 for a field is bullshit. Even if a rider wins, her prize money may not even cover her airfare. And we’ve had women’s lib for 40 years? Come on! It’s just as bad in Europe. Christine Vardaros keeps telling me they are trying to give her cans of soup and clogs for winning races over there. Now I'm certainly not saying I deserve accolades and angels and cherubs playing songs for our race -- although we have been known to hire some pretty good punk bands. I like watching the women’s races. And I think some of the most compelling personalities in the sport right now are women. Katie Compton probably draws more people to more races than any other ‘cross racer in America, male or female. More importantly, my sponsors like watching the women race. They want to see the very best come to their town and they’re willing to pay for it.”

Here is a press release i found on a bunch of sites including cyclingnews.com and usacycling.org:
U.S. Squad for UCI Cyclo-cross World Cup #1 Announced

This press release about 2008 Vanderkitten Road Team was also picked up by a bunch of cycling sites such as cyclingnews.com and bicycle retailer:

Vanderkitten has announced it will expand its NRC involvement to a six-women elite team as well as developmental and regional support riders in 2008, following on from the single rider it fielded in 2007. Vanderkitten Racing, as the squad will be known, is currently laying plans that will see the company play a larger role within the NRC series after it fielded a single rider, Liz Hatch, in 2007.

"Our success in sponsoring Liz Hatch in 2007 has convinced us that Vanderkitten and cycling go hand in hand," said Venderkitten's Mark Zefeldt." Our focus next year will be the majority of the NRC calendar, and to that effect we have signed four immensely talented girls with another two athletes to be announced shortly."

In addition to the re-signing of Hatch, the team will field Atlanta's Leigh Valletti, Charlottesville's Mandy Lozano and Mill Valley's Christine Vardaros. The team is currently accepting resumes for the remaining two spots in its elite squad.

"Vanderkitten is thrilled to support these hard working, vibrant athletes and the sport of

women's cycling," said Vanderkitten's founder David Verrecchia. "We're all looking forward to the upcoming season with great anticipation. Vanderkitten's mission since its inception is to create a long-term relationship with cycling and raise the bar of sponsorships for women athletes.

"High profile athletes provide a tremendous marketing value to all parties associated with their image," he added. "Women influence both female and male purchasing decisions. Why, then, have women typically earned less than 10 percent of most pro male athletes salaries?"

The clothing company-backed squad its expected to announce more details about its 2008 plans over the coming months. 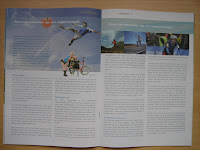 And lastly, i was interviewed by the Belgian vegetarian mag, Eva Magazine. They did an article on pro athletes on a plant-based diet that was published this month. The same magazine has also asked me to speak at their next vegetarian conference. Maybe this time i will remember to tape it so i can post it on the blog so you, too, can be subjected to my offbeat-ish sense of humor!

Tomorrow i pre-ride the Kalmthout World Cup course. I can't believe it's finally here! Pre-riding these courses is always like riding in a slow-motion movie clip. It feels like a movie scene because you spend an hour being passes by a collection of famous riders such as Sven Nys, Bart Wellens, Jonathan Page. And the relative speed in which they pass me makes me feel like i am at best riding in slow motion. I will try to update the blog tomorrow but chances are rather slim - we'll see...

Off I go. Thanks for reading!

C - Tear it up! Please post some post-race pics so we can see the new kit complete with Belgian toothpaste! And mad props to your promoter friend - that is awesome support for women's racing and sounds like a great race. Now I know what to look for next season (I have buddies who live in NY, can't remember the town right now, but about 30 minutes North of NY, NY) when I wanna go play with the Easties.

Kick ass with style and elegance!!

Good luck to you and Sarah this weekend!

Yeah, i did what you all said to do in the race! Your well wishes worked!