World Vegetarian Day was an interesting experience! I rode my fixed gear from Mill Valley to San Francisco - masterfully navigated through the waves of cyclotourists over the golden gate bridge, smoothly headed up and over the Presidio, weaved in and out of the city streets, and entered Golden Gate park without a hitch. 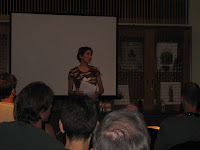 around for longer than it took me to get there. Central Park in NYC was much easier - there's the one loop that runs through the park and that's it. After asking at least 27 people for directions - which is always a challenge when you are in a tourist-heavy location - I stumbled across a few granola-crunchies wearing tie-dyed oversized tees, peasant skirts and barely-there sandles. After lurking behind them for a few minutes, they led me directly to the Veggie Day Festival! Score!

Immediately upon arriving at my speakers table, I sat my water bottle and a few other things down. Within no more than three seconds, crazed event attendees grabbed all my personal crap and walked away! WTF!!!! After retrieving as much as i could, i got down to putting some probars (vegan energy bar sponsor of mine) along with a few other display items such as a vanderkitten (my sponsor who makes clothing for women who KICK ASS!) water bottle, VDK stickers, VDK tattoos, a full-size Beljum Budder (chamois cream) with a few mini samples, and my VDK camo tee that i planned to wear for my speech. Again, within three seconds, passerbys grabbed IT ALL!!! F_CK!!! Once again, i was off to get the tee and beljum budder, etc back. Luckily I found the tee but the full-size beljum budder and fistfulls of probars were gone. Unbelievable. I had this preconceived notion that vegetarians would have better manners than the meat-eating variety - I'm a dumbass.

After clearing off everything from the table but the VDK stickers and tattoos, my trading cards, beljum budder stickers, and ProBars (cut into sample-sized pieces), we were officially open for business.

I forgot how much effort it is to work a booth! Don, Art and I were cutting ProBars nonstop to keep up with the demanding public!

Probably the most interesting off all experiences at world veggie day was to see the "nutritional vegans" in the same room as the "animal rights vegans." Since i am an active part of both sides, I never really noticed that they don't really mingle. I don't know why i find that strange...

I may get around to writing more on world veggie day but first i must post photos of my BRAND NEW AHRENS PIMPMOBILE!! To come shortly... 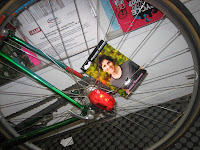 Oh, and if you want to read about Flandria's very kind coverage of the event, here's her blog link.

The photo of the rear bike wheel contains my newest trading card - the VANDERKITTEN edition. It is on the wheel of one of my crazed fans. haha!
Posted by PEANUT at 3:11 AM

Crazy vegetarians, always stealing stuff. I can't say I wouldn't take a fistful of Probars if they were left unattended...


Oh, the hottness of one of the Vanderkitten Ahrens cross bikes inspired VegTriathlete (www.vegtriathlete.blogspot.com) to try some cyclocross.

How cool is that?

...see, you're an athlete, so you think about food combining & proper nutrition whereas some a these folks are body & brain starved...a mock-ish state of subjective self-denial from lack of good dietary habits led them to literally grasp at anything they could find...i guess...
...just sayin'...

The free sample theft... that may be classic SF! BTW bold riding the fix gear over the bridge.

Mark's right. I was, indeed, inspired to try some cyclocross by the hotness of the Ahrens Vanderkitten bike. Can't wait to see your pics of the bike in action!

The greedy sample (or "not sample") grabbing is disappointing... I'm hoping the AR peeps would have more ethics than that! But who knows? I fall in both camps of veganism, too. I'd say I'm primarily an ethically motivated vegan, but it was learning about the healthy aspects of veganism that convinced me that it was a feasible way to live (and live well).

trading card looks nice.. I want one.
When will you be back in the old country?

I'm leaving SF wednesday to arrive on the east coast. Then it is back to belgium 17 october. See you around!

Finally meeting you was a highlight for me! =)

Yeah, i'm an ass! Sorry... AND I MET DAVE NOISY!!! After knowing each other through the internet for a million years we finally met. He is a really talented vegan track racer from Canada who has a link to his site on my blog.